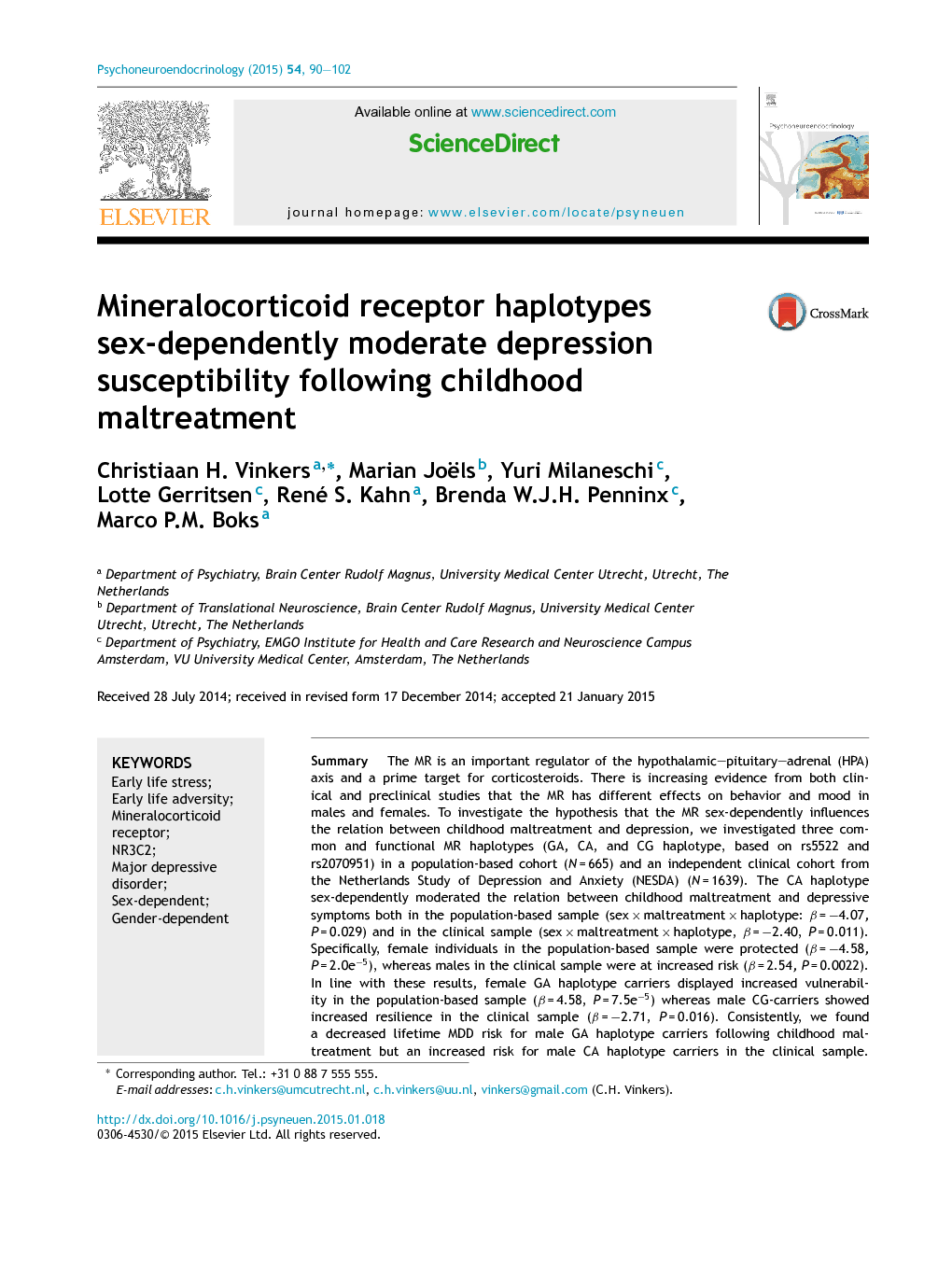 The MR is an important regulator of the hypothalamic–pituitary–adrenal (HPA) axis and a prime target for corticosteroids. There is increasing evidence from both clinical and preclinical studies that the MR has different effects on behavior and mood in males and females. To investigate the hypothesis that the MR sex-dependently influences the relation between childhood maltreatment and depression, we investigated three common and functional MR haplotypes (GA, CA, and CG haplotype, based on rs5522 and rs2070951) in a population-based cohort (N = 665) and an independent clinical cohort from the Netherlands Study of Depression and Anxiety (NESDA) (N = 1639). The CA haplotype sex-dependently moderated the relation between childhood maltreatment and depressive symptoms both in the population-based sample (sex × maltreatment × haplotype: β = −4.07, P = 0.029) and in the clinical sample (sex × maltreatment × haplotype, β = −2.40, P = 0.011). Specifically, female individuals in the population-based sample were protected (β = −4.58, P = 2.0e−5), whereas males in the clinical sample were at increased risk (β = 2.54, P = 0.0022). In line with these results, female GA haplotype carriers displayed increased vulnerability in the population-based sample (β = 4.58, P = 7.5e−5) whereas male CG-carriers showed increased resilience in the clinical sample (β = −2.71, P = 0.016). Consistently, we found a decreased lifetime MDD risk for male GA haplotype carriers following childhood maltreatment but an increased risk for male CA haplotype carriers in the clinical sample. In both samples, sex-dependent effects were observed for GA-GA diplotype carriers. In summary, sex plays an important role in determining whether functional genetic variation in MR is beneficial or detrimental, with an apparent female advantage for the CA haplotype but male advantage for the GA and CG haplotype. These sex-dependent effects of MR on depression susceptibility following childhood maltreatment are relevant in light of the increased prevalence of mood disorders in women and point to a sex-specific role of MR in the etiology of depression following childhood maltreatment.

The hypothalamic–pituitary–adrenal (HPA) axis is essential for successful adaptation to stress. However, stress exposure, especially early in life, is also a major risk factor for psychiatric disorders. Both mineralocorticoid (MR) and glucocorticoid receptors (GR) are involved in HPA-axis regulation and constitute primary targets for its end product corticosteroids (de Kloet et al., 2005). Whereas the role of the GR has received ample attention, the MR has remained relatively unexplored. This may be due to the fact that cortisol binds with high affinity to the MR, resulting in substantial occupancy even under non-stressful circumstances (Joëls et al., 2008). Therefore, MRs were primarily thought to facilitate GR functionality by cortisol binding (i.e., a cortisol “chelator”). However, there is increasing evidence that the MR plays a pivotal role in HPA-axis functionality and determines susceptibility for stress-related psychiatric disorders (Ter Heegde et al., 2015, Klok et al., 2011b, Otte et al., 2010, Van Leeuwen et al., 2011 and Berardelli et al., 2013). In addition to the genomic MR, MRs located in the vicinity of the membrane and active with high hormone concentrations were recently shown to mediate rapid cortisol effects and influence stress appraisal (Karst et al., 2010). These findings have put the MR forward as an important mediator of stress effects in the brain and point to a role for the MR in susceptibility for depression (DeRijk et al., 2008 and Ter Heegde et al., 2015). The MR may be particularly important following childhood maltreatment which is a well-established risk factor for depression and associated with persistent changes in HPA-axis functionality (Heim et al., 1997 and Heim et al., 2008). Several converging lines of evidence indicate that MR-mediated susceptibility for psychiatric disorders may be sex-dependent. First, a recent clinical study showed that resilience to depression associated with a functional MR haplotype was only present in females (Klok et al., 2011c). Second, preclinical studies suggest that MR expression levels have sex-dependent consequences on fear memory (Ter Horst et al., 2012) and decision making (Ter Horst et al., 2014). Also, chronic stress sex-dependently modulates MR expression (Karandrea et al., 2000 and Kitraki et al., 2004). Third, sex-dependent MR effects are biologically plausible in light of MR affinity for the female steroid hormone progesterone (Carey et al., 1995 and Quinkler et al., 2002), which can in turn alter MR expression (Castrén et al., 1995 and Turner, 1990). Together, these data support evidence that the role of the MR may be sex-dependent. These sex differences are important in light of consistent gender differences in the prevalence of stress-related psychiatric disorders (Cyranowski et al., 2000 and Piccinelli and Wilkinson, 2000). Moreover, even though often overlooked, consistent sex differences exist in the endocrine stress response (Kudielka and Kirschbaum, 2005). This study aimed to investigate whether common and functional genetic variation in the MR would dependently moderate the relation between childhood maltreatment and depressive symptoms in a general population sample and an independent clinical sample from the Netherlands Study of Depression and Anxiety (NESDA). Haplotype analysis based on exonic sequencing of the MR gene NR3C2 in fifty Dutch individuals has shown that three common MR haplotypes exist in the 5′ region based on the single nucleotide polymorphisms rs2070951 and rs5522 (Van Leeuwen, 2010). MR-2C/G (rs2070951) is located 2 nucleotides before the translation site of exon 2, and MRI180V (rs5522) is located within exon 2. Both SNPs affect in vitro transactivation by altering either MR expression or functionality. MRI180V substitutes isoleucine (A) for valine (G) in the N-terminal of the MR protein and in vitro testing shows that the Val-allele results in a mild loss of function compared to the Iso-allele (DeRijk et al., 2006 and Van Leeuwen et al., 2011). The MR-2C/G SNP is located outside the MR coding region but inside a Kozac translation regulatory sequence which regulates MR transcription. C-allele carriers have an increased MR expression (Leeuwen et al., 2010). MRI180V and MR-2C/G are in low linkage disequilibrium (r2 = 0.11), and the combination of these 2 SNPs results in three common MR haplotypes in the general population ( DeRijk et al., 2008). These three common MR haplotypes differentially affect MR activity and are therefore appropriate to investigate the effects of functional genetic MR variation in humans ( Klok et al., 2011c and Van Leeuwen et al., 2011). Based on the known protective effects of the CA haplotype specifically in females but not in males ( Klok et al., 2011c), we hypothesized that for maltreatment-related depression, a similar protective effect would be present in females and not in males. We further hypothesized that the other MR haplotypes would have the opposite effect and would be associated with an increased vulnerability in females. 2. Methods 2.1. Samples 2.1.1. Population-based sample Participants in the population-based sample were recruited using a website targeted at Dutch young adults and adolescents from 18 to 25 years (www.cannabisquest.nl). Details on recruitment and verification strategies have been previously published (Van Gastel et al., 2012). Of the 1259 participants that completed comprehensive assessments and provided blood samples for genetic testing, complete data were available for 665 subjects due to a later implementation of the Childhood Trauma Questionnaire (CTQ) assessment. All participants provided a urine sample in order to verify recent self-reported cannabis use. The study was approved by the Ethical Review Board of the University Medical Center Utrecht and all participants gave written informed consent.