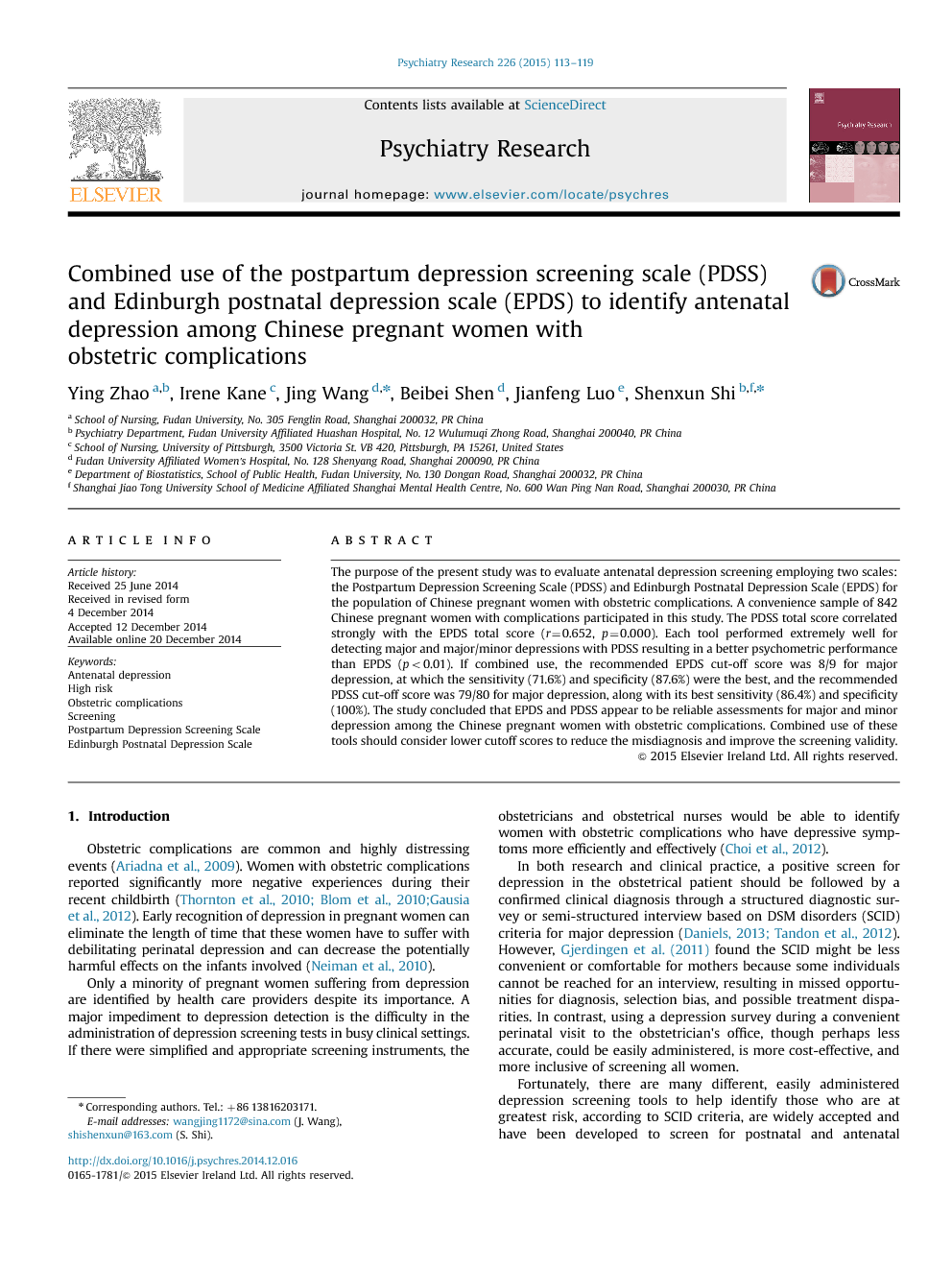 The purpose of the present study was to evaluate antenatal depression screening employing two scales: the Postpartum Depression Screening Scale (PDSS) and Edinburgh Postnatal Depression Scale (EPDS) for the population of Chinese pregnant women with obstetric complications. A convenience sample of 842 Chinese pregnant women with complications participated in this study. The PDSS total score correlated strongly with the EPDS total score (r=0.652, p=0.000). Each tool performed extremely well for detecting major and major/minor depressions with PDSS resulting in a better psychometric performance than EPDS (p<0.01). If combined use, the recommended EPDS cut-off score was 8/9 for major depression, at which the sensitivity (71.6%) and specificity (87.6%) were the best, and the recommended PDSS cut-off score was 79/80 for major depression, along with its best sensitivity (86.4%) and specificity (100%). The study concluded that EPDS and PDSS appear to be reliable assessments for major and minor depression among the Chinese pregnant women with obstetric complications. Combined use of these tools should consider lower cutoff scores to reduce the misdiagnosis and improve the screening validity.

Obstetric complications are common and highly distressing events (Ariadna et al., 2009). Women with obstetric complications reported significantly more negative experiences during their recent childbirth (Thornton et al., 2010, Blom et al., 2010 and Gausia et al., 2012). Early recognition of depression in pregnant women can eliminate the length of time that these women have to suffer with debilitating perinatal depression and can decrease the potentially harmful effects on the infants involved (Neiman et al., 2010). Only a minority of pregnant women suffering from depression are identified by health care providers despite its importance. A major impediment to depression detection is the difficulty in the administration of depression screening tests in busy clinical settings. If there were simplified and appropriate screening instruments, the obstetricians and obstetrical nurses would be able to identify women with obstetric complications who have depressive symptoms more efficiently and effectively (Choi et al., 2012). In both research and clinical practice, a positive screen for depression in the obstetrical patient should be followed by a confirmed clinical diagnosis through a structured diagnostic survey or semi-structured interview based on DSM disorders (SCID) criteria for major depression (Daniels, 2013 and Tandon et al., 2012). However, Gjerdingen et al. (2011) found the SCID might be less convenient or comfortable for mothers because some individuals cannot be reached for an interview, resulting in missed opportunities for diagnosis, selection bias, and possible treatment disparities. In contrast, using a depression survey during a convenient perinatal visit to the obstetrician׳s office, though perhaps less accurate, could be easily administered, is more cost-effective, and more inclusive of screening all women. Fortunately, there are many different, easily administered depression screening tools to help identify those who are at greatest risk, according to SCID criteria, are widely accepted and have been developed to screen for postnatal and antenatal depression in the primary care setting (Boyd et al., 2005 and Breedlove and Fryzelka, 2011), two widely utilized screening scales are the Edinburgh Postnatal Depression Scale (EPDS) (Cox et al., 1987) and the Postpartum Depression Screening Scale (PDSS) (Beck and Gable, 2000). Some studies have compared the psychometric properties of the EPDS and other screening scales. For example, Tandon et al.,(2012) enrolled 32 pregnant women and 63 women with a child <6 months in home visitation programs. Each woman completed a structured clinical interview and three depression screening tools: the EPDS, Center for Epidemiologic Studies Depression Scale (CES-D), and Beck Depression Inventory II (BDI-II). The results indicated that each screening tool appear to be reliable and brief assessments of major and minor depression among low-income African American perinatal women. However, given that no women during pregnancy met criteria for minor depression, it was not possible to determine optimal prenatal cutoff scores. In addition, Zhong et al. (2014) recruited 1517 women receiving prenatal care to evaluate the psychometric properties of the Patient Health Questionnaire (PHQ-9) and EPDS, and found both of them are reliable and valid scales for antepartum depression assessment. But the study results could not determine the extent to which scores from each scales are predictive of adverse maternal and perinatal outcomes. There are few studies evaluating the comparability of the EPDS and PDSS, to date, in China, only one study (Li et al., 2011) screened 387 normal pregnant mothers within 12 weeks postpartum and compared the performance of the Chinese version of the EPDS and PDSS. Given the high prevalence of depressive symptoms among high-risk pregnant women and the lack of studies combined the EPDS and the PDSS during pregnancy, we conducted the present study to expand the body of research for perinatal depression screening by employing and analyzing the validity of the combined use of them, for antenatal depression screen in a population of Chinese pregnant women with obstetric complications. More specifically, if combined use, we wanted to determine the cutoff scores of the PDSS and the EPDS to screen for antenatal depression among this population. Previous research indicates that screening pregnant women for depression is clinically indicated; and, combining the EPDS and the PDSS might build upon the strengths of each scale to increase the validity of antenatal depression screening. Such information could encourage other researchers and clinicians to test the validity of the combined use of the different screening instruments to identify depression during the perinatal period in multiple obstetric settings.