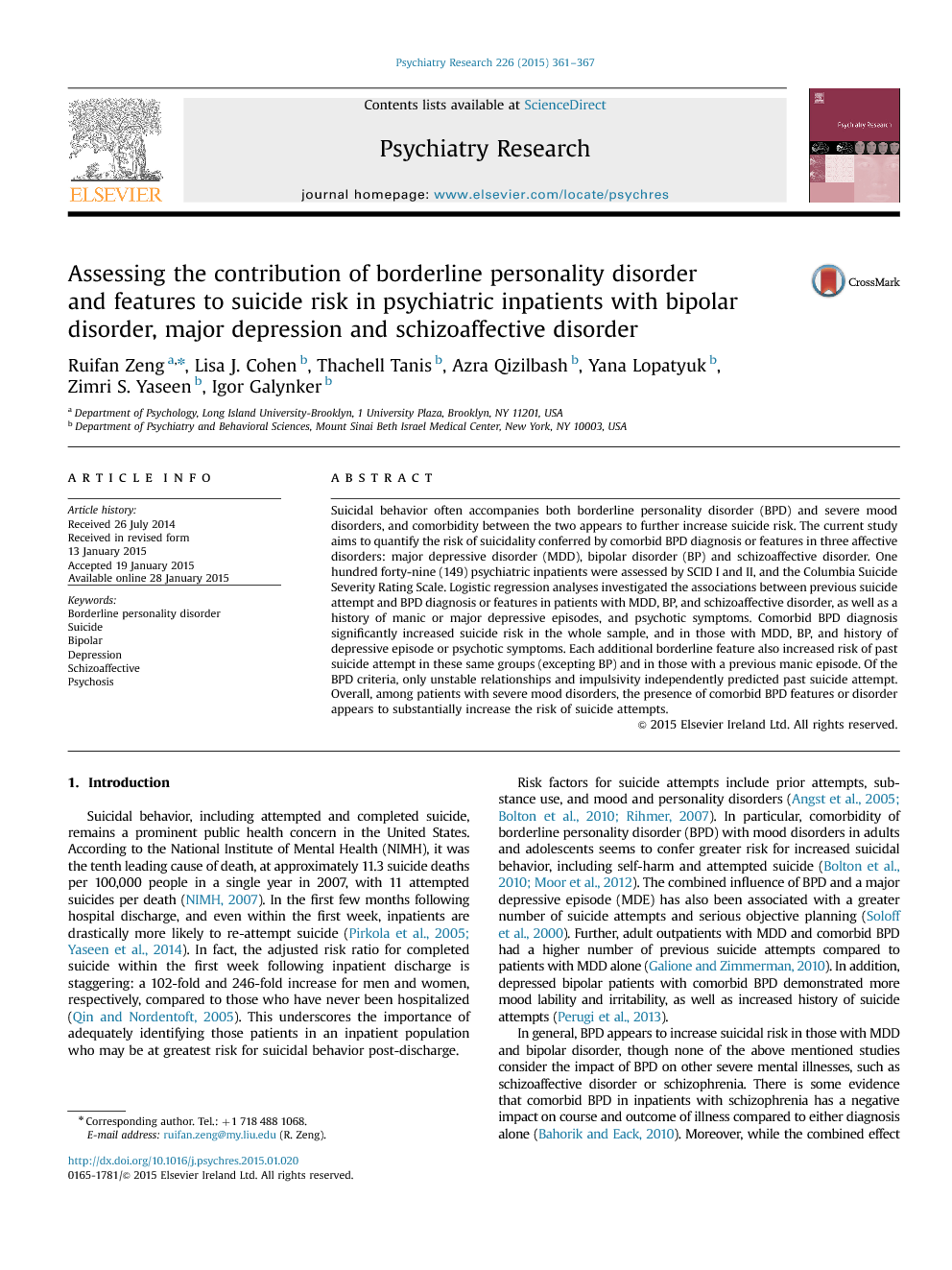 Suicidal behavior often accompanies both borderline personality disorder (BPD) and severe mood disorders, and comorbidity between the two appears to further increase suicide risk. The current study aims to quantify the risk of suicidality conferred by comorbid BPD diagnosis or features in three affective disorders: major depressive disorder (MDD), bipolar disorder (BP) and schizoaffective disorder. One hundred forty-nine (149) psychiatric inpatients were assessed by SCID I and II, and the Columbia Suicide Severity Rating Scale. Logistic regression analyses investigated the associations between previous suicide attempt and BPD diagnosis or features in patients with MDD, BP, and schizoaffective disorder, as well as a history of manic or major depressive episodes, and psychotic symptoms. Comorbid BPD diagnosis significantly increased suicide risk in the whole sample, and in those with MDD, BP, and history of depressive episode or psychotic symptoms. Each additional borderline feature also increased risk of past suicide attempt in these same groups (excepting BP) and in those with a previous manic episode. Of the BPD criteria, only unstable relationships and impulsivity independently predicted past suicide attempt. Overall, among patients with severe mood disorders, the presence of comorbid BPD features or disorder appears to substantially increase the risk of suicide attempts.

Suicidal behavior, including attempted and completed suicide, remains a prominent public health concern in the United States. According to the National Institute of Mental Health (NIMH), it was the tenth leading cause of death, at approximately 11.3 suicide deaths per 100,000 people in a single year in 2007, with 11 attempted suicides per death (NIMH, 2007). In the first few months following hospital discharge, and even within the first week, inpatients are drastically more likely to re-attempt suicide (Pirkola et al., 2005 and Yaseen et al., 2014). In fact, the adjusted risk ratio for completed suicide within the first week following inpatient discharge is staggering: a 102-fold and 246-fold increase for men and women, respectively, compared to those who have never been hospitalized (Qin and Nordentoft, 2005). This underscores the importance of adequately identifying those patients in an inpatient population who may be at greatest risk for suicidal behavior post-discharge. Risk factors for suicide attempts include prior attempts, substance use, and mood and personality disorders (Angst et al., 2005, Bolton et al., 2010 and Rihmer, 2007). In particular, comorbidity of borderline personality disorder (BPD) with mood disorders in adults and adolescents seems to confer greater risk for increased suicidal behavior, including self-harm and attempted suicide (Bolton et al., 2010 and Moor et al., 2012). The combined influence of BPD and a major depressive episode (MDE) has also been associated with a greater number of suicide attempts and serious objective planning (Soloff et al., 2000). Further, adult outpatients with MDD and comorbid BPD had a higher number of previous suicide attempts compared to patients with MDD alone (Galione and Zimmerman, 2010). In addition, depressed bipolar patients with comorbid BPD demonstrated more mood lability and irritability, as well as increased history of suicide attempts (Perugi et al., 2013). In general, BPD appears to increase suicidal risk in those with MDD and bipolar disorder, though none of the above mentioned studies consider the impact of BPD on other severe mental illnesses, such as schizoaffective disorder or schizophrenia. There is some evidence that comorbid BPD in inpatients with schizophrenia has a negative impact on course and outcome of illness compared to either diagnosis alone (Bahorik and Eack, 2010). Moreover, while the combined effect of BPD and a depressive episode (across various psychiatric diagnoses) may increase suicidality (Soloff et al., 2000), there is considerably less research on how a BPD diagnosis affects those who are not predominantly depressed, but who are also manic or psychotic. Therefore, the current study aims to determine the differential influences of BPD on suicide risk across multiple mood disorders, including those characterized by mania or psychosis. By assessing BPD׳s effect on suicide risk across several mood and psychotic disorder diagnoses within the same sample, the current study can provide a more thorough and nuanced understanding of suicide risk in patients with comorbid mood disorder and personality pathology. We also examine patients based on transdiagnostic syndromes (i.e., those with a history of depressive episodes, manic episodes, or psychotic symptoms), in order to gain a clearer picture of how borderline pathology affects suicidal behavior differentially depending on mood and psychotic symptoms that may cut across discrete DSM-IV diagnoses. Further, it is important to consider the effects of BPD dimensionally rather than categorically (i.e., whether or not one meets criteria for the full diagnosis), given that severity of comorbid Cluster B features might be predictive of suicidal behavior even in subthreshold cases (Corbitt et al., 1996). Thus, in the current study we consider not only the effect on suicide risk of comorbid BPD diagnosis but also of borderline features (i.e., each borderline diagnostic criterion endorsed, independent of BPD diagnosis) in patients with diagnoses of MDD, bipolar disorder, and schizoaffective disorder as well as current or previous syndromes of major depressive episodes, manic episodes, and psychosis. Though schizoaffective disorder is classified as a psychotic disorder, it is characterized by major mood episodes and for the sake of simplicity, will be heretofore referred to as a mood disorder along with MDD and bipolar disorder. We hypothesized that the presence of comorbid BPD diagnosis or features would confer a significant additional risk of past suicide attempts in psychiatric inpatients with severe mood disorders, as well as a lifetime history of depressive, manic, or psychotic symptoms. 2. Methods 2.1. Subjects One hundred forty-nine (149) participants presenting with mood or psychotic disorders were recruited from two psychiatric inpatient units in a large, urban hospital. The study was approved by Mount Sinai Beth Israel׳s Institutional Review Board (IRB) for Human Subjects Research. All participants were between the ages of 18 and 65, English speaking, able to understand and sign an IRB-approved informed consent, and compensated for completing a 5 hour test battery. Patients met criteria for schizophrenia, schizoaffective disorder, bipolar disorder (I, II, NOS), major depressive disorder, or non-psychotic and non-bipolar mood or anxiety disorder. Patients were excluded if they were experiencing acute psychosis, mania, and/or agitation severe enough to preclude informed consent or task performance, and if they had severe cognitive deficits (DSM-5 intellectual disabilities or neurocognitive disorders).