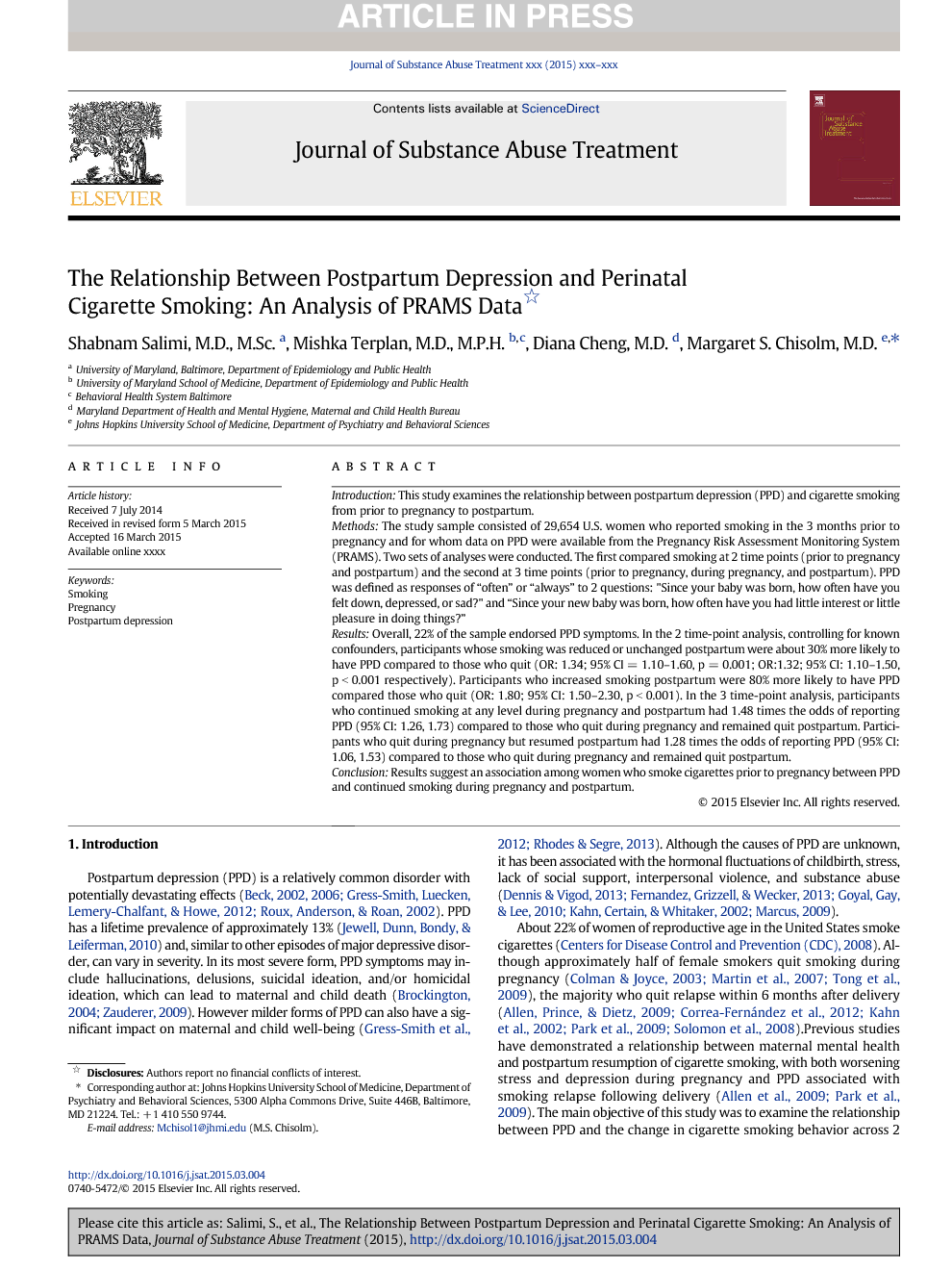 Postpartum depression (PPD) is a relatively common disorder with potentially devastating effects (Beck, 2002, Beck, 2006, Gress-Smith et al., 2012 and Roux et al., 2002). PPD has a lifetime prevalence of approximately 13% (Jewell, Dunn, Bondy, & Leiferman, 2010) and, similar to other episodes of major depressive disorder, can vary in severity. In its most severe form, PPD symptoms may include hallucinations, delusions, suicidal ideation, and/or homicidal ideation, which can lead to maternal and child death (Brockington, 2004 and Zauderer, 2009). However milder forms of PPD can also have a significant impact on maternal and child well-being (Gress-Smith et al., 2012 and Rhodes and Segre, 2013). Although the causes of PPD are unknown, it has been associated with the hormonal fluctuations of childbirth, stress, lack of social support, interpersonal violence, and substance abuse (Dennis and Vigod, 2013, Fernandez et al., 2013, Goyal et al., 2010, Kahn et al., 2002 and Marcus, 2009). About 22% of women of reproductive age in the United States smoke cigarettes (Centers for Disease Control and Prevention (CDC), 2008). Although approximately half of female smokers quit smoking during pregnancy (Colman and Joyce, 2003, Martin et al., 2007 and Tong et al., 2009), the majority who quit relapse within 6 months after delivery (Allen et al., 2009, Correa-Fernández et al., 2012, Kahn et al., 2002, Park et al., 2009 and Solomon et al., 2008).Previous studies have demonstrated a relationship between maternal mental health and postpartum resumption of cigarette smoking, with both worsening stress and depression during pregnancy and PPD associated with smoking relapse following delivery (Allen et al., 2009 and Park et al., 2009). The main objective of this study was to examine the relationship between PPD and the change in cigarette smoking behavior across 2 (prior to pregnancy and postpartum) and 3 time points (prior to pregnancy, during pregnancy, and postpartum).

These findings suggest a link between PPD and perinatal cigarette smoking, as PPD was associated with continued smoking during pregnancy and postpartum. Not only may these results be of immediate assistance to clinicians in the screening of PPD, but the results may also serve to guide researchers in the design of future longitudinal studies including those aimed at developing interventions to prevent PPD among women who smoke prior to pregnancy. The study’s use of prior to pregnancy, during pregnancy, and postpartum time points to capture perinatal smoking behavior may also inform perinatal cigarette smoking prevention and treatment strategies of both clinicians and researchers. In addition, future studies of a more longitudinal nature, including those that assess depressive symptoms prior to pregnancy and/or that are designed to assess the potential causal relationship between PPD and perinatal smoking behavior change, are needed.