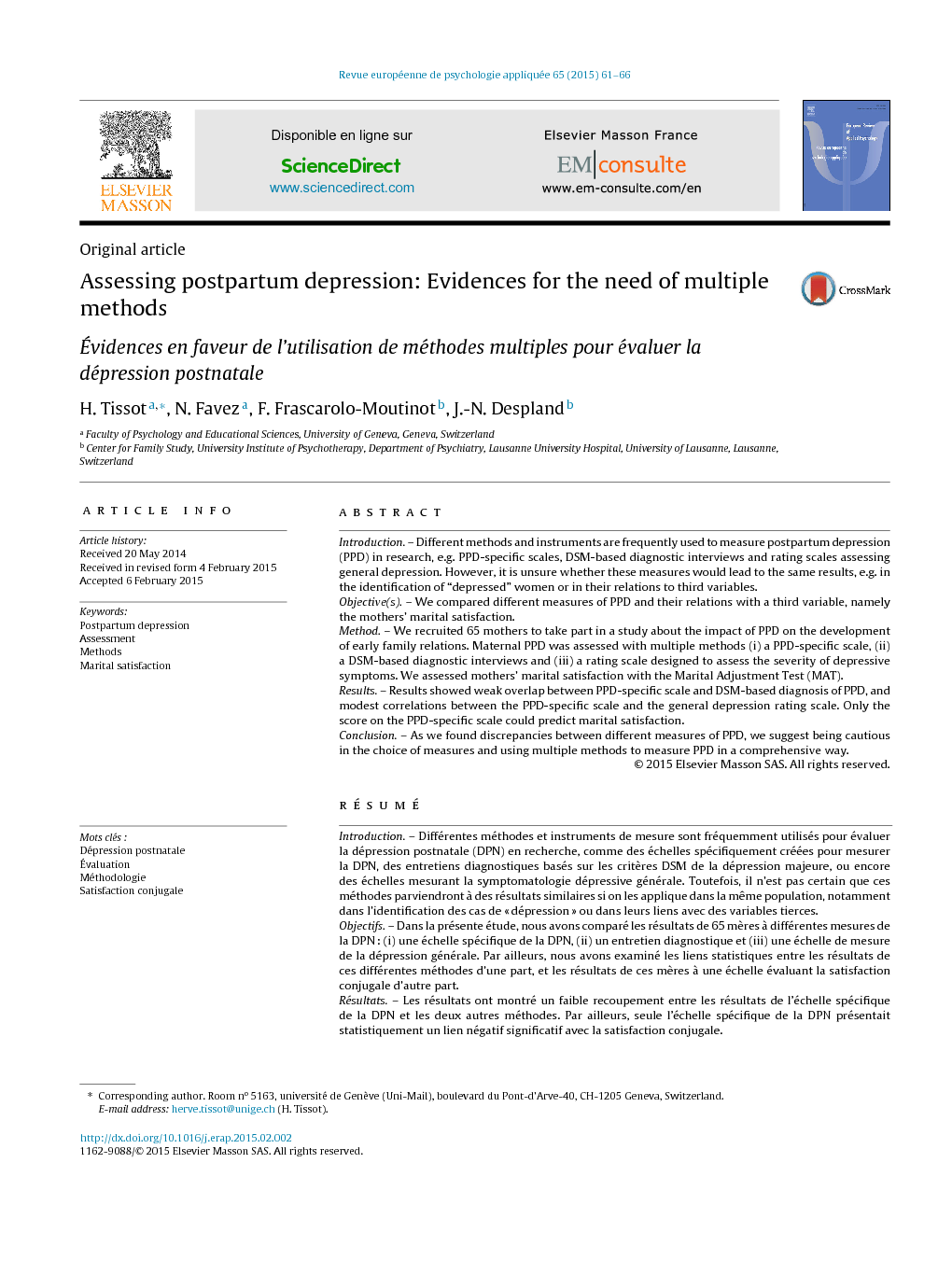 Different methods and instruments are frequently used to measure postpartum depression (PPD) in research, e.g. PPD-specific scales, DSM-based diagnostic interviews and rating scales assessing general depression. However, it is unsure whether these measures would lead to the same results, e.g. in the identification of “depressed” women or in their relations to third variables. Objective(s) We compared different measures of PPD and their relations with a third variable, namely the mothers’ marital satisfaction. Method We recruited 65 mothers to take part in a study about the impact of PPD on the development of early family relations. Maternal PPD was assessed with multiple methods (i) a PPD-specific scale, (ii) a DSM-based diagnostic interviews and (iii) a rating scale designed to assess the severity of depressive symptoms. We assessed mothers’ marital satisfaction with the Marital Adjustment Test (MAT). Results Results showed weak overlap between PPD-specific scale and DSM-based diagnosis of PPD, and modest correlations between the PPD-specific scale and the general depression rating scale. Only the score on the PPD-specific scale could predict marital satisfaction. Conclusion As we found discrepancies between different measures of PPD, we suggest being cautious in the choice of measures and using multiple methods to measure PPD in a comprehensive way.

We present in this section the descriptive statistics for the instruments used in the study. First, the results of the EPDS showed that mean and median scores of the sample were globally low (M = 6.77, Mdn = 6.0, SD = 4.64) and ranged from 0 to 24 points. The results of the EPDS indicated that n = 5 mothers (7.5%) had a score above the originally validated cutoff of 12/13 points and were thus potentially depressed. With a lower cutoff point of 8/9, the rate of depressed mothers jumped to 31%. Scores of the mothers on the MADRS were also relatively low (M = 4.9, Mdn = 4.0, SD = 5.2). These scores remained lower than the first cutoff of mild depression set to 8/9 points and n = 9 mothers (14.8%) scored above this cutoff. The mothers were mostly in the “mild depression” range (n = 6), whereas the others (n = 3) obtained scores in the “moderate depression” range. There was no mother scoring in the “severe depression” range in this study. During the diagnostic interview (DIGS), n = 4 women (6%) reported having suffered from at least five DSM-IV depression symptoms during at least two weeks in the previous month and therefore met the criteria for a major depressive episode. Half of them just reached the minimal number of symptoms (5). Concerning marital satisfaction, the scores of mothers on the MAT ranged from 51 to 156 points. Most mothers (83%) obtained scores above the cutoff of 100 points, whereas 17% of the mothers reported a global dissatisfaction regarding their couple relationship with scores below this cutoff. Mean and median scores were above the cutoff (M = 120.8, Mdn = 125.5, SD = 22.3) and the sample could thus be globally considered as satisfied.