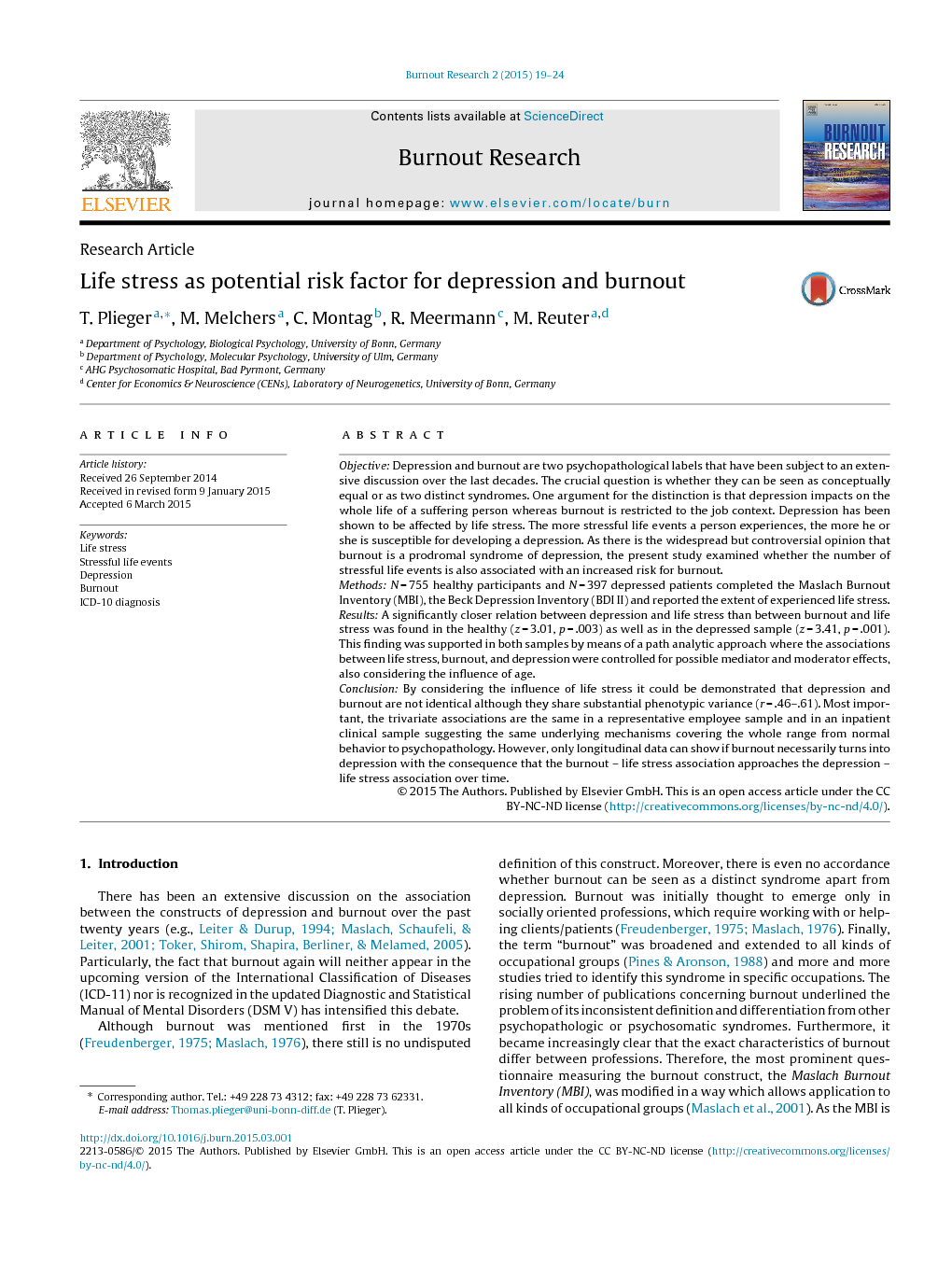 • The associations between life stress, burnout, and depression are tested.• Associations are tested in a healthy and in an inpatient depressive sample.• Despite a relation between burnout and depression, both can be seen as distinct.• Life stress is closer related to depression than to burnout in both samples.• Results are further investigated with path analyses.ObjectiveDepression and burnout are two psychopathological labels that have been subject to an extensive discussion over the last decades. The crucial question is whether they can be seen as conceptually equal or as two distinct syndromes. One argument for the distinction is that depression impacts on the whole life of a suffering person whereas burnout is restricted to the job context. Depression has been shown to be affected by life stress. The more stressful life events a person experiences, the more he or she is susceptible for developing a depression. As there is the widespread but controversial opinion that burnout is a prodromal syndrome of depression, the present study examined whether the number of stressful life events is also associated with an increased risk for burnout.MethodsN = 755 healthy participants and N = 397 depressed patients completed the Maslach Burnout Inventory (MBI), the Beck Depression Inventory (BDI II) and reported the extent of experienced life stress.ResultsA significantly closer relation between depression and life stress than between burnout and life stress was found in the healthy (z = 3.01, p = .003) as well as in the depressed sample (z = 3.41, p = .001). This finding was supported in both samples by means of a path analytic approach where the associations between life stress, burnout, and depression were controlled for possible mediator and moderator effects, also considering the influence of age.ConclusionBy considering the influence of life stress it could be demonstrated that depression and burnout are not identical although they share substantial phenotypic variance (r = .46–.61). Most important, the trivariate associations are the same in a representative employee sample and in an inpatient clinical sample suggesting the same underlying mechanisms covering the whole range from normal behavior to psychopathology. However, only longitudinal data can show if burnout necessarily turns into depression with the consequence that the burnout – life stress association approaches the depression – life stress association over time.

3.1. Differences in subsample characteristics regarding burnout and depression As the samples were independent and not divided post hoc by means of psychometrical criteria, it has to be mentioned that there were participants in the control sample being highly depressed and/or scored very high on burnout and that there were patients that nearly had recovered and therefore had relatively low scores on depression and/or on burnout. So first of all, we conducted one-way ANOVAs comparing the healthy sample with the clinical sample to make sure that our samples differed with respect to the dependent variables. As expected, there was a difference between patients and the healthy group in both, depression (F(1, 1150) = 603.527, p < .001) and MBI burnout (F(1, 1150) = 693.601, p < .001). Depressive (M = 22.77, SD = 11.11) as well as burnout symptomatology (M = 50.44, SD = 15.75) in the sample of depressed patients significantly exceeded the values in the control group (depression: M = 8.84, SD = 7.92; burnout: M = 26.06, SD = 14.49) on both variables.