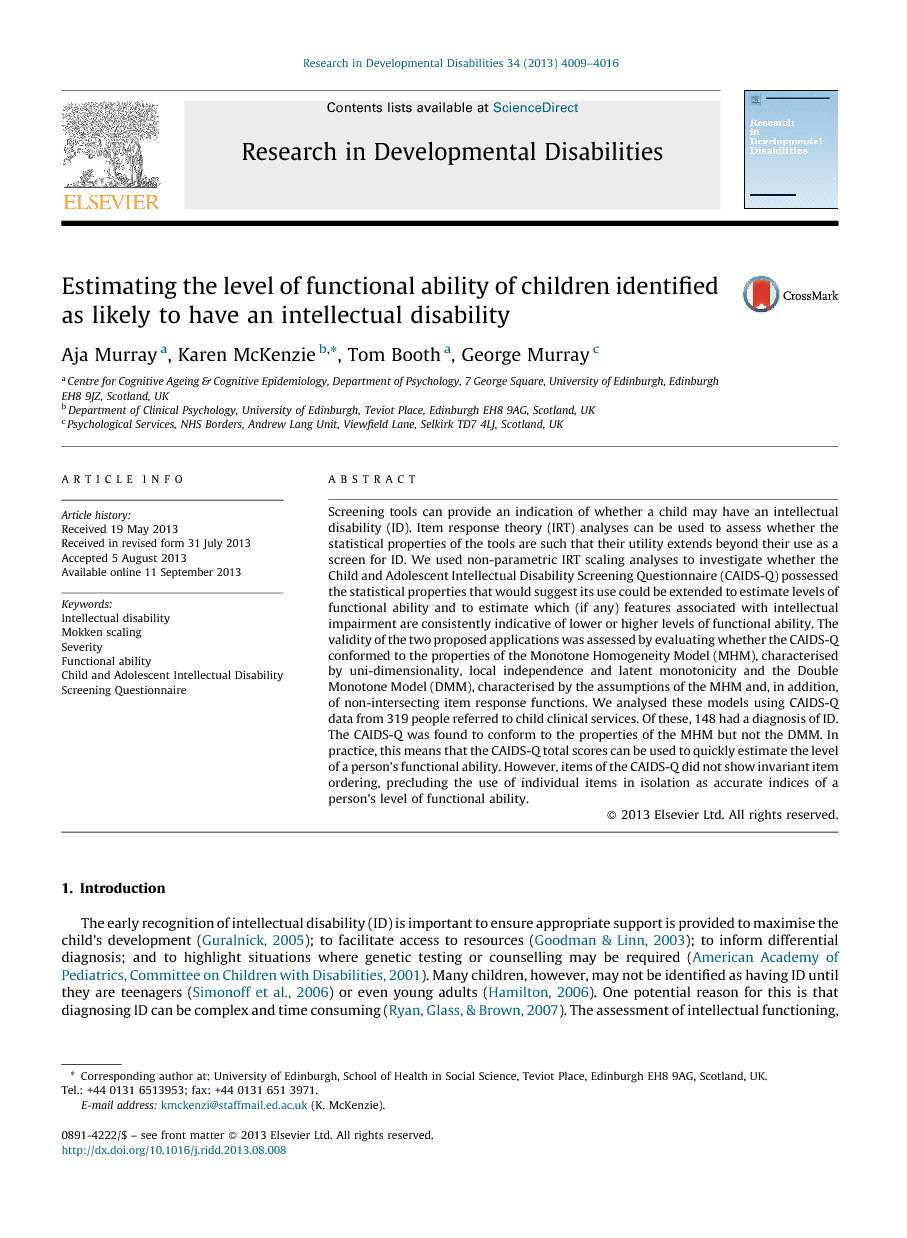 Screening tools can provide an indication of whether a child may have an intellectual disability (ID). Item response theory (IRT) analyses can be used to assess whether the statistical properties of the tools are such that their utility extends beyond their use as a screen for ID. We used non-parametric IRT scaling analyses to investigate whether the Child and Adolescent Intellectual Disability Screening Questionnaire (CAIDS-Q) possessed the statistical properties that would suggest its use could be extended to estimate levels of functional ability and to estimate which (if any) features associated with intellectual impairment are consistently indicative of lower or higher levels of functional ability. The validity of the two proposed applications was assessed by evaluating whether the CAIDS-Q conformed to the properties of the Monotone Homogeneity Model (MHM), characterised by uni-dimensionality, local independence and latent monotonicity and the Double Monotone Model (DMM), characterised by the assumptions of the MHM and, in addition, of non-intersecting item response functions. We analysed these models using CAIDS-Q data from 319 people referred to child clinical services. Of these, 148 had a diagnosis of ID. The CAIDS-Q was found to conform to the properties of the MHM but not the DMM. In practice, this means that the CAIDS-Q total scores can be used to quickly estimate the level of a person's functional ability. However, items of the CAIDS-Q did not show invariant item ordering, precluding the use of individual items in isolation as accurate indices of a person's level of functional ability.

The early recognition of intellectual disability (ID) is important to ensure appropriate support is provided to maximise the child's development (Guralnick, 2005); to facilitate access to resources (Goodman & Linn, 2003); to inform differential diagnosis; and to highlight situations where genetic testing or counselling may be required (American Academy of Pediatrics, Committee on Children with Disabilities, 2001). Many children, however, may not be identified as having ID until they are teenagers (Simonoff et al., 2006) or even young adults (Hamilton, 2006). One potential reason for this is that diagnosing ID can be complex and time consuming (Ryan, Glass, & Brown, 2007). The assessment of intellectual functioning, in particular, can cause delays in the diagnostic process because it requires the use of a standardised and validated assessment that is individually administered by an appropriately qualified applied psychologist (British Psychological Society [BPS], 2000). This has led to the recognition that screening tools may offer a pragmatic solution in circumstances where there is a desire to reduce waiting times and channel referrals appropriately (BPS 2003) by having a quick method of identifying those individuals who should undergo full assessment. Screening tools may also be used by researchers (see Charman et al., 2007) to identify particular populations of interest, where the need to assess a large number of individuals may make the use of full diagnostic assessments unfeasible. Screening tools may also be used where there is the need for an early indicator of the potential support needs of children, for example in educational settings (Sonnander, 2000), while waiting for full diagnostic assessment to take place. Under all of these circumstances, it would be clinically useful if screening tools could provide more information about the potential support needs of the child, to allow service planning to begin at an early stage. Screening tools, however, tend to use a cut-off score that results in a dichotomous classification of either ID or non-ID, reflecting their aim of identifying individuals who may have ID and who, therefore, should undergo further assessment (McKenzie & Megson, 2012). If, however, a screening tool was able to give an indication of the extent of the functional ability of a child, or be used to indicate what abilities are expected to develop ahead of others, then it may have additional clinical and research benefits. Item Response Theory (IRT) analysis can be used to evaluate whether a clinical scale possesses the statistical properties such that it can validly be used in more extended ways in clinical settings (Reise & Waller, 2009). For example, while ROC analysis can be used to assess the classification accuracy of a screen for ID (and thus focuses on the range of the trait close to the diagnostic threshold), IRT based techniques focus more explicitly on how the test performs across the full range of the latent trait. Similarly, factor analyses can be useful in assessing the dimensionality of a scale and how well particular items measure identified dimensions, however, there is generally not an explicit focus on how items perform at different locations on these dimensions.

We showed that the CAIDS-Q conforms to the properties of the MHM but not the DMM. This means that the scale can be validly used to estimate the level of functional ability of a child, rather than just providing a dichotomous ‘yes’, ‘no’ answer to the question of whether or not a child is likely to have ID.