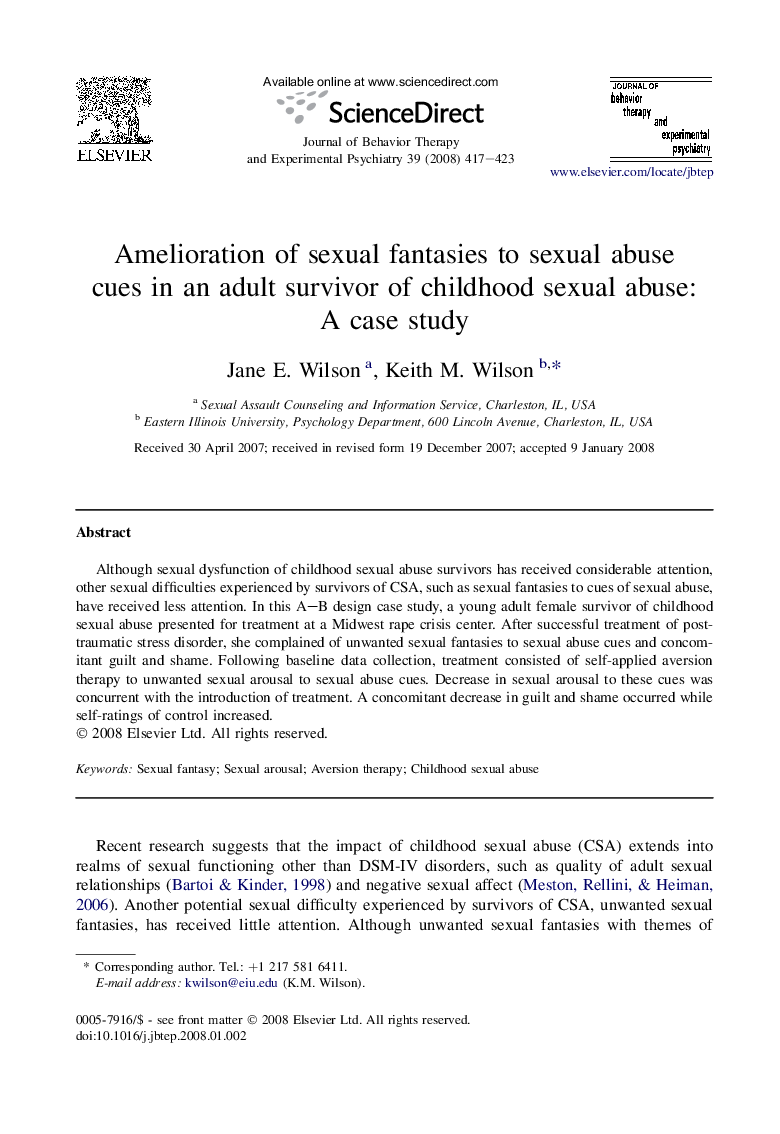 Although sexual dysfunction of childhood sexual abuse survivors has received considerable attention, other sexual difficulties experienced by survivors of CSA, such as sexual fantasies to cues of sexual abuse, have received less attention. In this A–B design case study, a young adult female survivor of childhood sexual abuse presented for treatment at a Midwest rape crisis center. After successful treatment of post-traumatic stress disorder, she complained of unwanted sexual fantasies to sexual abuse cues and concomitant guilt and shame. Following baseline data collection, treatment consisted of self-applied aversion therapy to unwanted sexual arousal to sexual abuse cues. Decrease in sexual arousal to these cues was concurrent with the introduction of treatment. A concomitant decrease in guilt and shame occurred while self-ratings of control increased.

Recent research suggests that the impact of childhood sexual abuse (CSA) extends into realms of sexual functioning other than DSM-IV disorders, such as quality of adult sexual relationships (Bartoi & Kinder, 1998) and negative sexual affect (Meston, Rellini, & Heiman, 2006). Another potential sexual difficulty experienced by survivors of CSA, unwanted sexual fantasies, has received little attention. Although unwanted sexual fantasies with themes of submission or force have been discussed (Briere, 1992 and Maltz, 2001), there are remarkably little data. Gold (1991) discovered that undergraduate female participants with a CSA history reported more force in their sexual fantasies. Briere, Smiljanich, and Henschel (1994) found that undergraduate female CSA survivors reported more fantasies that involved being forced into sexual activity than non-abused females. Interestingly, in a study of female incest survivors recruited from self help support groups, Westerlund (1992) found that 51% reported having fantasies that produced guilt or shame due to content involving inappropriate partners or fantasies involving humiliation, force, or pain. Although the research on the occurrence of these unwanted sexual fantasies in CSA survivors is limited, many clinicians consider this to be a significant issue in the treatment of these women (Briere, 1992). Maltz (1992) has developed a model of “sexual healing” for survivors of CSA that borrows from cognitive–behavioral and psychodynamic theories. One of the goals of this treatment is gaining control over unwanted sexual fantasies. Unfortunately, there have been no controlled studies. A behavioral analysis of unwanted fantasies suggests that stimuli associated with sexual arousal may become conditioned stimuli for sexual arousal and fantasy. For some survivors of CSA, abuse experiences may have included the automatic response of orgasm. Repeated instances of this may lead to aspects of the abuse acquiring the properties of a conditioned stimulus, i.e., eliciting conditioned responses such as automatic sexual arousal or imagining (sensing) some aspect of the abuse. Conceivably, these responses in their own turn could lead to other thoughts both respondent and operant in nature (see Martin & Pear, 2003 for a thorough discussion of respondent and operant conceptualization of cognition, including fantasy). Abel and Blanchard (1974) similarly describe the development of sexual fantasy and arousal as being generated by the repeated pairing of fantasized cues with orgasm. Based on behavioral models, one treatment applied to paraphilic behavior, including unwanted sexual arousal and fantasies, has been that of aversion therapy (e.g., Barlow, Leitenberg, & Agras, 1968). Based on the principle of counterconditioning, this involves pairing a stimulus eliciting aversion with the stimulus eliciting unwanted fantasy, intrusive sexual thought, or sexual arousal. With repeated pairings the stimulus becomes less positive and eventually negative. The purpose of the current investigation was to look at the effectiveness of aversion therapy for a woman's unwanted sexual fantasies involving force and coercion. Additionally, the impact of the intervention on the participant's sense of control and guilt/shame was explored.