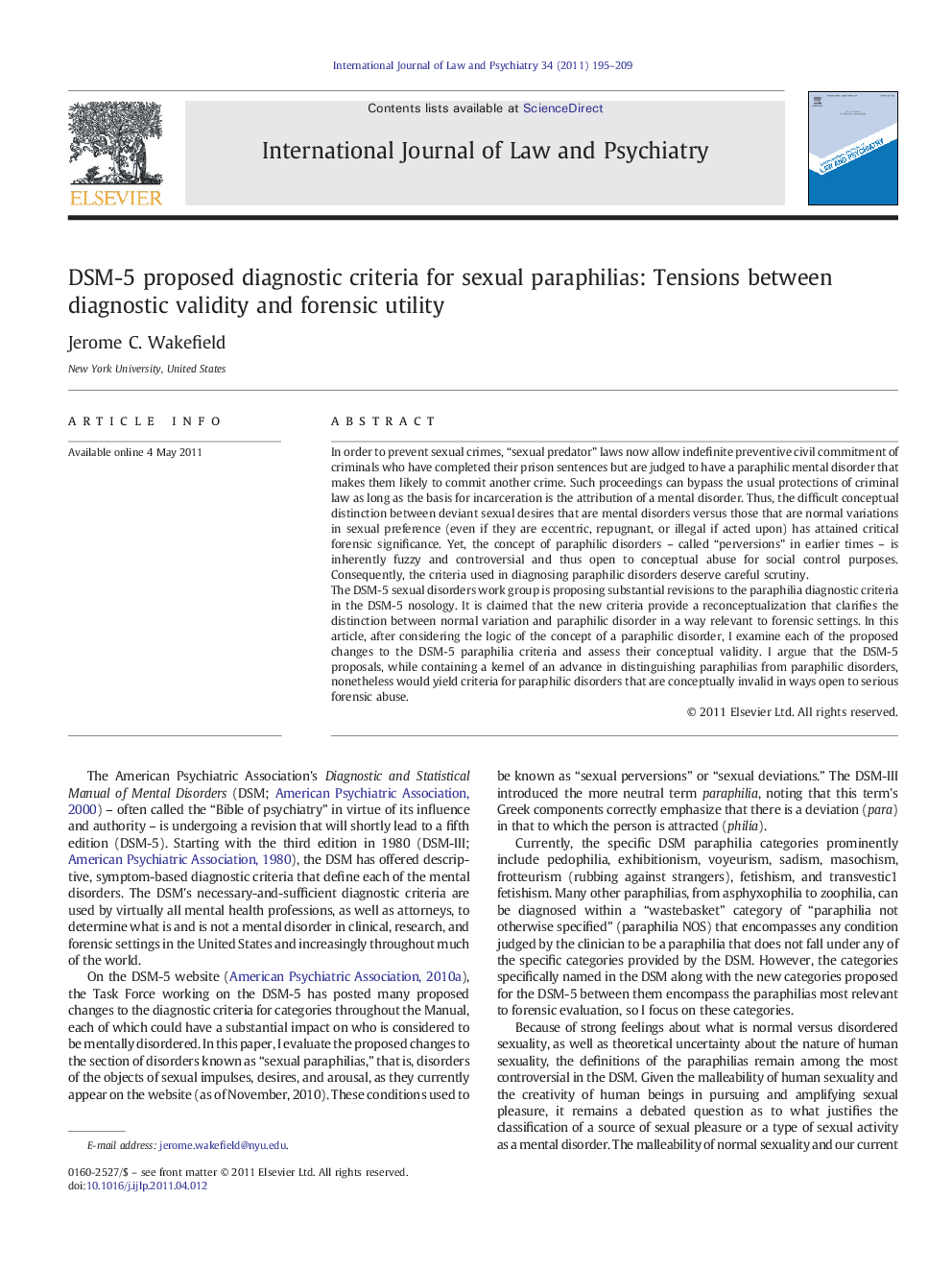 I have wrestled in this paper with the conceptual underpinnings of diagnosis of paraphilic disorders, and examined the validity of the proposed changes to the paraphilic diagnostic criteria in DSM-5. The DSM-5 proposals are driven to an extent by challenges posed by the need for diagnosis in the forensic context of sexual predator civil commitment proceedings. The most valid indicators of true paraphilic disorder – such as exclusiveness, fixation, and compulsiveness – which are difficult to establish in a forensic context, are not adequately taken into account either in the paraphilia criteria of the past or the proposals for DSM-5. Weaker criteria are used that open the door to false positive diagnoses. The proposals offered by the DSM-5 Workgroup dealing with sexual and gender identity disorders incorporate an enormous effort of thought and scholarship. They have some potentially useful features, but also some troubling limitations. If combined with other requirements, it may be that a “multiple victims” requirement could be helpful in protecting against false positive diagnoses under some circumstances, even though a history of multiple victims is neither necessary nor sufficient for disorder by itself. Terminological clarification of the distinction between a paraphilia, which may be a harmless sexual inclination even if a dysfunction, versus paraphilic disorders that are sexual dysfunctions that cause substantial harm to oneself or others, is useful, although it is already implicit in the “Criterion A/Criterion B” structure of the diagnostic criteria sets. On the other hand, the proposals for the new categories of “hebephilia” (incorporated into an omnibus “pedohebephilia” category) and “paraphilic coercive disorder” fail to satisfy rigorous standards for diagnostic validity, and open up major new avenues for false positive diagnoses. The proposed new categories as well as the multiple-victims proposal are open to abuse by confusing the performance of criminal sexual acts with having a paraphilic disorder. The paraphilic disorders present a continuing challenge to our conceptualization of mental disorder. Oddly enough, with the passing of laws allowing civil commitment of sexual offenders whose behavior is the outcome of a mental disorder and the declaring of such laws as constitutional by the Supreme Court, the valid diagnosis of paraphilic disorders has also become tactically central to the future of civil liberties in our country. At this important juncture, one would hope that the DSM-5 Workgroup might focus on basics and build on the long intellectual tradition of grappling with the nature of paraphilic disorders independent of the issue of forensic facilitation, so as to clarify the kinds of evidence that distinguish genuine sexual paraphilias from deviant sexual behavior not due to a sexual paraphilia. Unfortunately, it appears instead that the Workgroup's deliberations may have overly emphasized the facilitation of forensic evaluations with noncooperative respondents in sexual predator proceedings, rather than the core issue of diagnostic validity. The importance of protecting the public means that one cannot blithely adopt anti-psychiatric attitudes in this arena. The Workgroup's attempt to be both practical and respecting of the public and victims as well as the rights of the offender is to be admired. However, the first task should be to “get it right” with respect to diagnostic validity, and then to explore the practical needs in the forensic context within the framework set by validity considerations. Otherwise, the forensic tail is wagging the validity dog, and we are likely to get criteria that possess a misdirected pseudo-validity that will not serve us in the long run and set a dangerous precedent for future tensions between civil liberties and civil commitment for mental disorder.