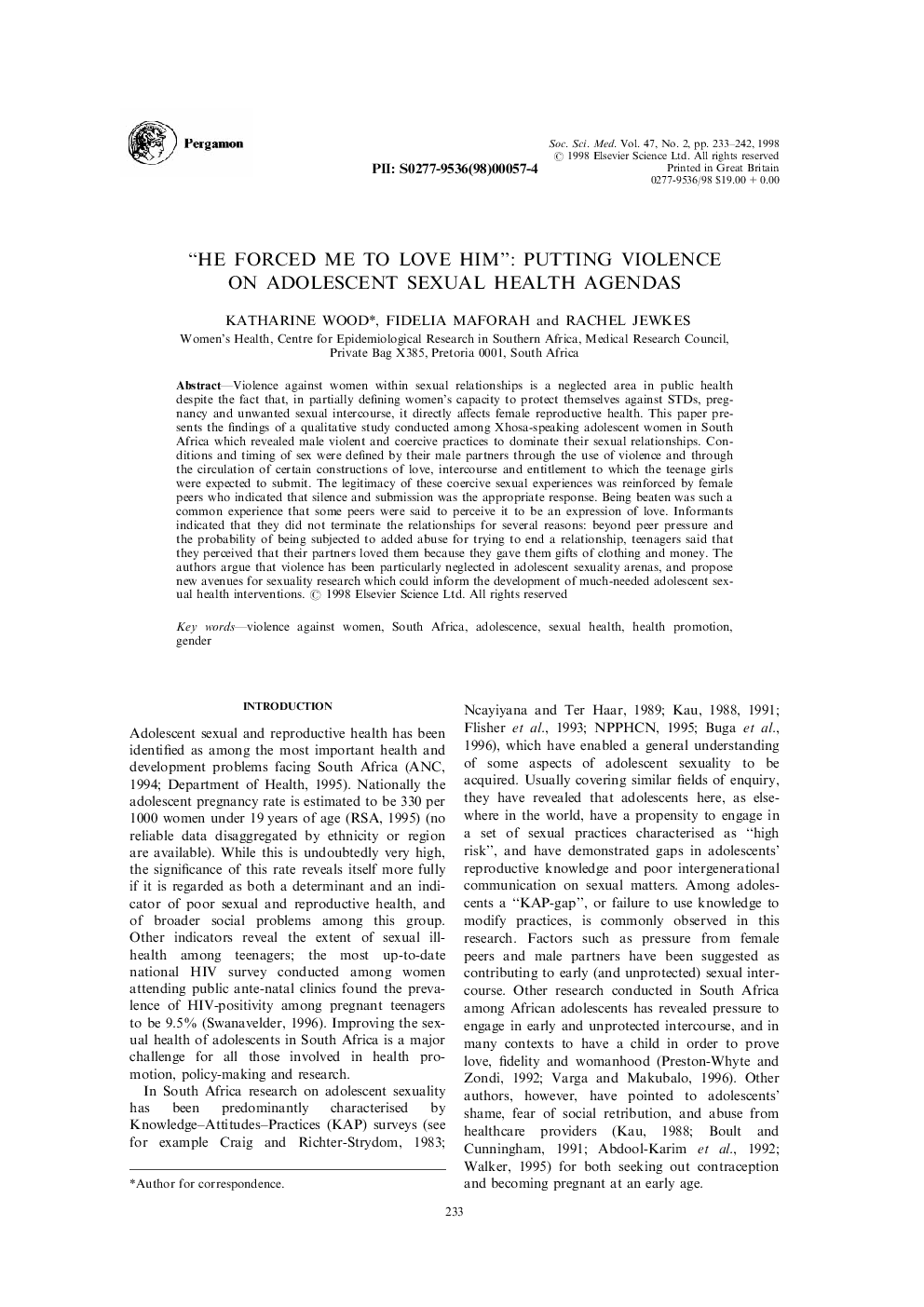 Violence against women within sexual relationships is a neglected area in public health despite the fact that, in partially defining women's capacity to protect themselves against STDs, pregnancy and unwanted sexual intercourse, it directly affects female reproductive health. This paper presents the findings of a qualitative study conducted among Xhosa-speaking adolescent women in South Africa which revealed male violent and coercive practices to dominate their sexual relationships. Conditions and timing of sex were defined by their male partners through the use of violence and through the circulation of certain constructions of love, intercourse and entitlement to which the teenage girls were expected to submit. The legitimacy of these coercive sexual experiences was reinforced by female peers who indicated that silence and submission was the appropriate response. Being beaten was such a common experience that some peers were said to perceive it to be an expression of love. Informants indicated that they did not terminate the relationships for several reasons: beyond peer pressure and the probability of being subjected to added abuse for trying to end a relationship, teenagers said that they perceived that their partners loved them because they gave them gifts of clothing and money. The authors argue that violence has been particularly neglected in adolescent sexuality arenas, and propose new avenues for sexuality research which could inform the development of much-needed adolescent sexual health interventions.

Adolescent sexual and reproductive health has been identified as among the most important health and development problems facing South Africa (ANC, 1994; Department of Health, 1995). Nationally the adolescent pregnancy rate is estimated to be 330 per 1000 women under 19 years of age (RSA, 1995) (no reliable data disaggregated by ethnicity or region are available). While this is undoubtedly very high, the significance of this rate reveals itself more fully if it is regarded as both a determinant and an indicator of poor sexual and reproductive health, and of broader social problems among this group. Other indicators reveal the extent of sexual ill-health among teenagers; the most up-to-date national HIV survey conducted among women attending public ante-natal clinics found the prevalence of HIV-positivity among pregnant teenagers to be 9.5% (Swanavelder, 1996). Improving the sexual health of adolescents in South Africa is a major challenge for all those involved in health promotion, policy-making and research. In South Africa research on adolescent sexuality has been predominantly characterised by Knowledge–Attitudes–Practices (KAP) surveys (see for example Craig and Richter-Strydom, 1983; Ncayiyana and Ter Haar, 1989; Kau, 1988 and Kau, 1991; Flisher et al., 1993; NPPHCN, 1995; Buga et al., 1996), which have enabled a general understanding of some aspects of adolescent sexuality to be acquired. Usually covering similar fields of enquiry, they have revealed that adolescents here, as elsewhere in the world, have a propensity to engage in a set of sexual practices characterised as “high risk”, and have demonstrated gaps in adolescents' reproductive knowledge and poor intergenerational communication on sexual matters. Among adolescents a “KAP-gap”, or failure to use knowledge to modify practices, is commonly observed in this research. Factors such as pressure from female peers and male partners have been suggested as contributing to early (and unprotected) sexual intercourse. Other research conducted in South Africa among African adolescents has revealed pressure to engage in early and unprotected intercourse, and in many contexts to have a child in order to prove love, fidelity and womanhood (Preston-Whyte and Zondi, 1992; Varga and Makubalo, 1996). Other authors, however, have pointed to adolescents' shame, fear of social retribution, and abuse from healthcare providers (Kau, 1988; Boult and Cunningham, 1991; Abdool-Karim et al., 1992; Walker, 1995) for both seeking out contraception and becoming pregnant at an early age. Internationally, recent social scientific research on sexuality, in partnership with HIV/AIDS lobbies, has brought about changes in the ways individuals' behaviour is analysed. In particular there have been moves away from biomedical and epidemiological constructions of individuals as members of groups designated as high risk (homosexual, intravenous drug-user) or low risk (heterosexual), towards understanding individuals as situated agents engaging in (high or low risk) practices with others. Understanding sexual encounters as sets of practices which are negotiated and enacted by the individuals concerned creates a space for considering how inequities determine and are played out during sexual intercourse, thereby affecting individuals' capacity to control it on their own terms (Worth, 1989; Holland et al., 1990; Wilton and Aggleton, 1991; McGrath, 1993; Orubuloye et al., 1993; Lear, 1995). These new understandings have revealed the need to put violence on health research agendas. This paper presents the findings of an exploratory qualitative study conducted among Xhosa adolescent women which revealed pervasive male control over almost every aspect of their early sexual experiences, and the male enactment of this in part through violent and coercive practices during sexual encounters. In discussing the findings we argue that violence has been widely neglected in health research and intervention development, and more especially so in adolescent sexuality arenas. There is an urgent need to open up new avenues for research and intervention in the area of adolescent sexuality, in particular focusing on violence, if it is to be possible to create a space in which young women can empower themselves to control their sexuality, sexual experiences and reproductive health.

Sexual health initiatives, whether in the form of primary research or intervention, need to be cognisant of the power differentials within sexual relationships, manifested in their most extreme form in violent and coercive practices, which limit individuals' capacity for autonomous action and self-protection against unwanted sexual intercourse, pregnancy and HIV/STDs. The violence–sexuality connection and its neglect in discussion of youth reproductive health must be recognised as an area of critical importance in public health. This study, conducted among Xhosa adolescent women, indicated that violence was a consistent feature of their sexual relationships and acted, with other influences, to enforce male control and definition of sexual intercourse. The data upholds the necessity of acquiring in-depth understanding of sexual experience, and of the nature of sexual (non-) communication and decision-making. Achievable through localised qualitative research which contextualises individuals dynamically within their social setting, such an understanding may contribute significantly to the development of sensitive and locally appropriate sexual health interventions.