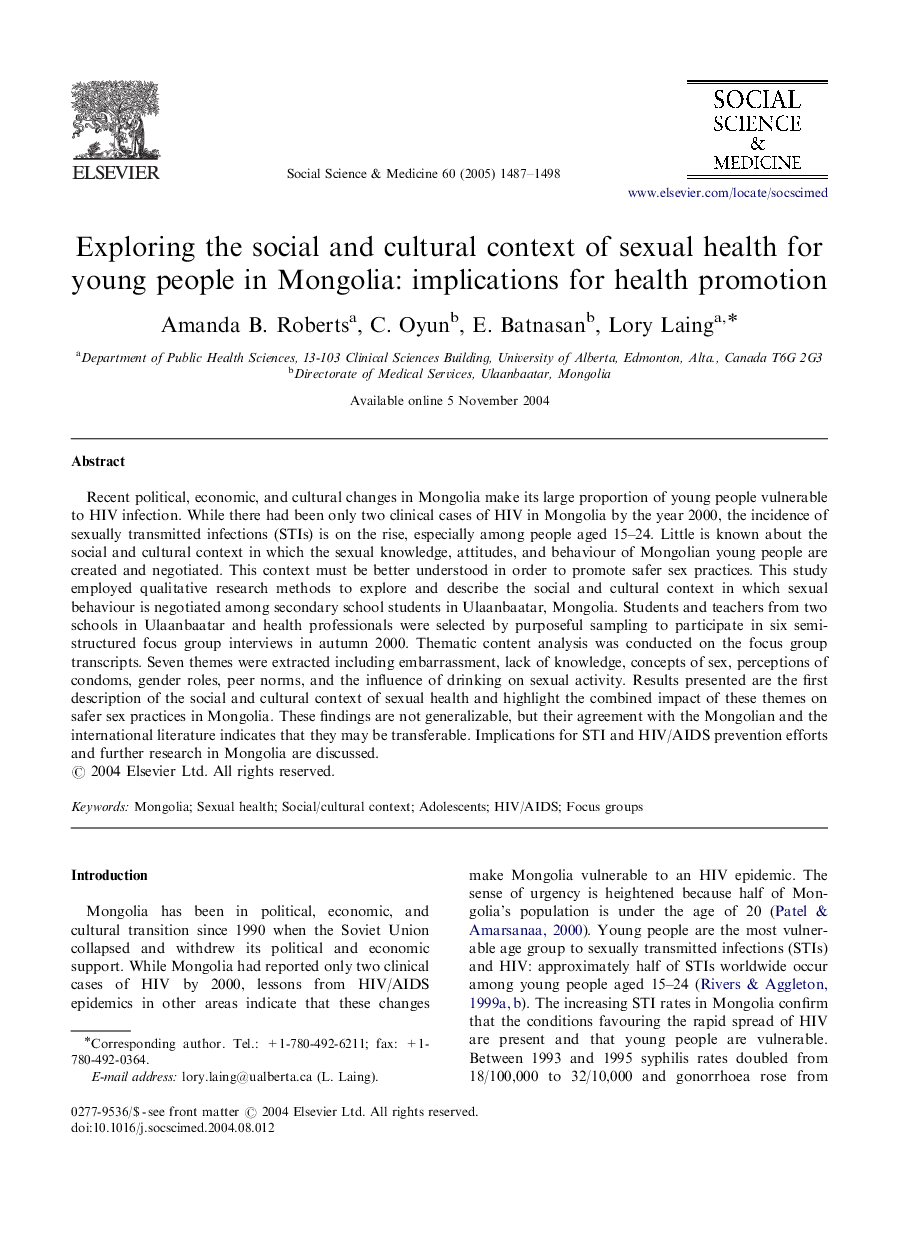 Recent political, economic, and cultural changes in Mongolia make its large proportion of young people vulnerable to HIV infection. While there had been only two clinical cases of HIV in Mongolia by the year 2000, the incidence of sexually transmitted infections (STIs) is on the rise, especially among people aged 15–24. Little is known about the social and cultural context in which the sexual knowledge, attitudes, and behaviour of Mongolian young people are created and negotiated. This context must be better understood in order to promote safer sex practices. This study employed qualitative research methods to explore and describe the social and cultural context in which sexual behaviour is negotiated among secondary school students in Ulaanbaatar, Mongolia. Students and teachers from two schools in Ulaanbaatar and health professionals were selected by purposeful sampling to participate in six semi-structured focus group interviews in autumn 2000. Thematic content analysis was conducted on the focus group transcripts. Seven themes were extracted including embarrassment, lack of knowledge, concepts of sex, perceptions of condoms, gender roles, peer norms, and the influence of drinking on sexual activity. Results presented are the first description of the social and cultural context of sexual health and highlight the combined impact of these themes on safer sex practices in Mongolia. These findings are not generalizable, but their agreement with the Mongolian and the international literature indicates that they may be transferable. Implications for STI and HIV/AIDS prevention efforts and further research in Mongolia are discussed.

Mongolia has been in political, economic, and cultural transition since 1990 when the Soviet Union collapsed and withdrew its political and economic support. While Mongolia had reported only two clinical cases of HIV by 2000, lessons from HIV/AIDS epidemics in other areas indicate that these changes make Mongolia vulnerable to an HIV epidemic. The sense of urgency is heightened because half of Mongolia's population is under the age of 20 (Patel & Amarsanaa, 2000). Young people are the most vulnerable age group to sexually transmitted infections (STIs) and HIV: approximately half of STIs worldwide occur among young people aged 15–24 (Rivers, & Aggleton (1999a) and Rivers, & Aggleton (1999b)). The increasing STI rates in Mongolia confirm that the conditions favouring the rapid spread of HIV are present and that young people are vulnerable. Between 1993 and 1995 syphilis rates doubled from 18/100,000 to 32/10,000 and gonorrhoea rose from 51/100,000 to 142/100,000 (Kipp, Sodnompil, Tuya, Erdenchimeg, & Nymadawa, 2002). Syphilis rates among Mongolians aged 15–24 rose 1.5–3.0-fold higher than any other group between 1993 and 1995 (Purevdawa et al., 1997). These data have prompted the Mongolian Ministry of Health to make reproductive health among young people an urgent priority, resulting in new policies, curricula, and programmes.