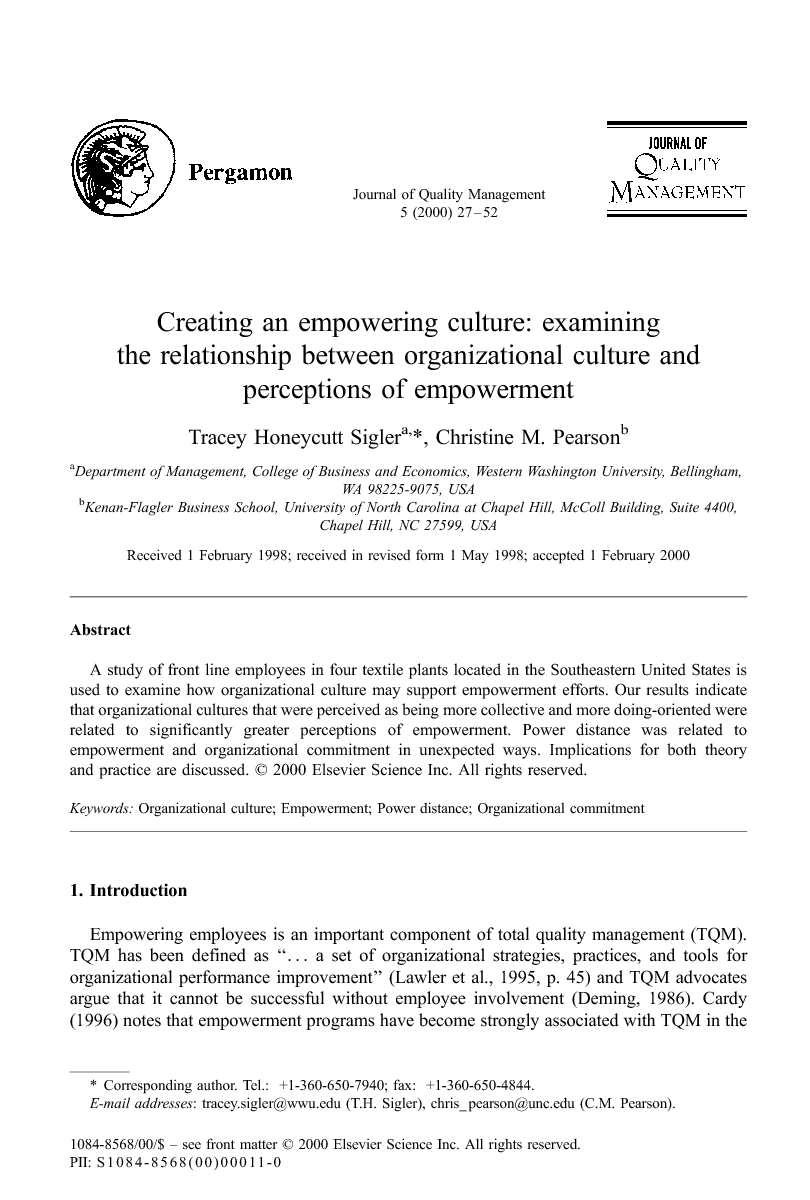 Empowering employees is an important component of total quality management (TQM). TQM has been defined as “… a set of organizational strategies, practices, and tools for organizational performance improvement” (Lawler et al., 1995, p. 45) and TQM advocates argue that it cannot be successful without employee involvement (Deming, 1986). Cardy (1996) notes that empowerment programs have become strongly associated with TQM in the United States and may be the critical factor in explaining successes and failures. “One of the most important principles of TQM concerns employee involvement, or as it is often called, empowerment” (Lawler, 1994, p. 68). Empowered employees support TQM efforts by (1) calling attention to quality problems in the work place and (2) continuously trying to improve the way they do their jobs. Empowerment efforts support these goals by giving employees the power to make decisions formerly made by managers, by providing employees with the information needed to make good decisions, by providing training necessary to understand the business, and by tying employee rewards to their performance (Lawler et al., 1995). In one review of the TQM literature, Zeitz et al. (1997) found that empowerment or employee involvement was identified as a TQM-related dimension in a large number of studies Berry, 1991, Carr & Littman, 1990, Dean & Evans, 1994, Denison, 1996, Hofstede, 1984, Hunt, 1992, Juran, 1995, Lawler et al., 1995, Litwin & Stringer, 1968, McMillan, 1989, Payne & Mansfield, 1973, Ross, 1993, Schmidt & Finnegan, 1992, Scholtes, 1988 and Weatherly & Beach, 1994. Organizations that (1) aspire to involve employees in organizational decision-making (such as that required by quality programs), (2) value the mental labor of all employees (a key to quality success) and, (3) work under the assumption that all employees can contribute to improving the organization might take comfort in being on their way to creating an “empowering culture,” and, thus, ready to reap the associated benefits regarding quality. Our objective in this paper is to further examine the importance of organizational culture in understanding the employee perceptions of empowerment that are necessary to support TQM efforts. Researchers are beginning to examine the relationship between organizational culture and empowerment. In a study of front line service workers in the hospitality industry, Sparrowe, 1994 and Sparrowe, 1995 found that a constructive organizational culture (that is, a culture with humanistic-encouraging, affiliative, achievement, and self-actualizing beliefs) (Cooke & Lafferty, 1986) fostered perceptions of empowerment. Similarly, Spreitzer (1996) found that a participative organizational climate (that is, a climate in which acknowledgment, creation, and liberation of employees are valued) was significantly related to perceptions of empowerment. Drawing from these results, we propose that organizational culture will be related to employee reactions to empowerment programs Liden & Tewksbury, 1995, Sparrowe, 1994 and Sparrowe, 1995.