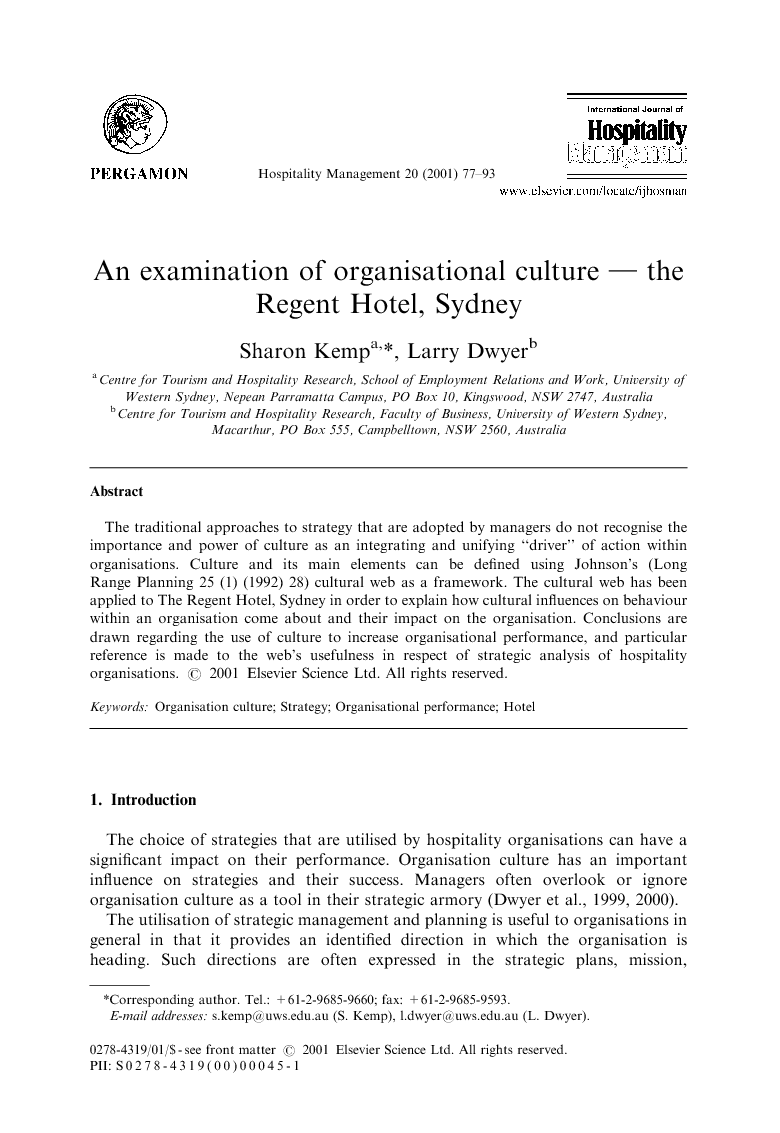 The traditional approaches to strategy that are adopted by managers do not recognise the importance and power of culture as an integrating and unifying “driver” of action within organisations. Culture and its main elements can be defined using Johnson's (Long Range Planning 25 (1) (1992) 28) cultural web as a framework. The cultural web has been applied to The Regent Hotel, Sydney in order to explain how cultural influences on behaviour within an organisation come about and their impact on the organisation. Conclusions are drawn regarding the use of culture to increase organisational performance, and particular reference is made to the web's usefulness in respect of strategic analysis of hospitality organisations.

The choice of strategies that are utilised by hospitality organisations can have a significant impact on their performance. Organisation culture has an important influence on strategies and their success. Managers often overlook or ignore organisation culture as a tool in their strategic armory (Dwyer et al (1999) and Dwyer et al (2000)). The utilisation of strategic management and planning is useful to organisations in general in that it provides an identified direction in which the organisation is heading. Such directions are often expressed in the strategic plans, mission, objectives, vision statement and goals. These expressed directions are highly visible to employees, customers/clients and to the public. The expectation is that “good” valued employees will adhere to management's expressed directives. Strategic management operationalised in this way (from this perspective) is very mechanistic (Morgan, 1997). This style of strategic management relies on power and decision-making residing at the top level of the organisation. There is a reliance on the legitimate authority that goes with positions to reinforce decisions. The use of policies, procedures and rules ensures that action in the organisation goes according to the “grand master plan”. In such a regulated environment, organisation members are more doers than thinkers. The advantage of such a structured way of managing an organisation is that organisation members’ actions are controlled and predictable. Employee roles and, therefore, appropriate responses and actions, are defined by their position in the organisation. Those who crave additional responsibility and avenues of growth are shut out of what is considered to be the province of senior management. However, this approach to strategically managing has clear consequences for employee motivation and commitment to the organisation (Lorsch, 1986). Employees are likely to be more motivated and more productive if they feel they can make a valuable contribution to the organisation through either contribution of new ideas, better ways of doing things and participation in decision-making. Employees are more receptive to change in the organisation if they feel they have had their views taken into consideration, even if the organisation does not implement employees’ preferred options. In particular, this traditional approach to strategy ignores an important and powerful element of organisations, that of culture. Not only do organisations operate within a cultural/social context, but they are also culture-bearing entities. There is no one, uncontested, definition of culture. Sathe (1983, p. 6) suggests that it is a set of important understandings that members of a community share in common. Culture here is viewed as an integrating, unifying phenomenon, in the sense that it is shared by all organisational members and in the sense that various cultural phenomena are consistent with each other. Culture integrates and binds; it is a normative glue — “the way we do things around here” (Deal and Kennedy, 1982). While this view has its critics (Nord, 1985; Uttal, 1983), most organisation researchers agree that an analysis and recognition of the surface culture should be the initial step in strategy formulation and implementation, and is a crucial element in an evaluation of organisation performance (Brown, 1998). It is the authors’ conviction that the existence of a “strong”1 culture can be a powerful enabling force in strategy formulation. The positive effects of increased employee identification and commitment highlight the importance of linking culture and strategy to achieve heightened organisation performance. Culture can be used strategically to elicit unified and consistent responses and expression of shared values in an organisation. Using illustrative examples from a study of organisational culture in an international hotel, the paper discusses the usefulness of the concept of a “cultural web” for understanding the organisational culture of hospitality organisations. The paper also raises a number of issues for further research on the links between organisation culture, strategy and performance of hospitality organisations. The paper has three specific aims: First, to define organisational culture, to identify the main elements of what is called the “cultural web”, and to highlight the role which elements of this “web” play in strategy formulation and organisational performance. Second, to employ the concept of a “cultural web” to study the organisational culture of the Regent Hotel, Sydney, Australia.2 The extent to which different elements of the “cultural web” are present in the organisation and the ways in which they have an influence on organisational performance are discussed. Third, to discuss the usefulness of the concept of “cultural web” for assessing strategy formulation, implementation and evaluation in hospitality organisations generally and to identify issues for further research.

The distinctive features of The Regent Hotel, Sydney that appear to explain the success of the cultural approach as an instrument of strategy are: decentralised power structures, shared goals of the organisation and its employees, organisational stability and growth, and planning that includes sufficient organisational slack (i.e., unused resources) to absorb the costs of implementing and maintaining the culture of the hotel. The cultural approach, as judged by the managers and the staff that were interviewed for this study, has been successful. The cultural approach to strategically managing an organisation does have some limitations. Firstly, the approach only works well with informed and enthusiastic people. Secondly, it consumes large amounts of time to implement, as highlighted earlier. Finally, it can foster such a strong sense of organisational identity among employees that it becomes almost a handicap. It can be difficult to bring in “outsiders” at the top levels of the organisation and acceptance of new blood may present an ongoing problem. Organisations such as the Regent Hotel that have strong cultures often suppress deviance, find that attempts to introduce change outside of agreed boundaries are resisted, and that homogeneity and inbreeding can occur. For the Regent Hotel to avoid these problems, management need to be aware that an indoctrinal air can accompany a strong culture. Instead of achieving increased performance and satisfaction, the cultural approach to strategy may end up being just another variant of the management-centred approach and consequently, run the risk of maintaining a barrier between thinkers and doers in the organisation. Properly executed, the cultural approach to strategy can achieve a firm commitment from management and staff to the organisation's goals and strategies by capitalising on natural inclinations to want to develop opportunities in a reasoned way, without the impediment of management feeling threatened and drawing in the reins of control. The Regent Hotel has achieved much with its cultural approach to strategy. The Regent culture has fostered in employees a personal belief in and commitment to the hotel's values. The work environment is guest- and employee-centred. Both management and employees are open to learning and adopting change. The hotel's structure provides a framework of agreed tasks, priorities and performance standards, and lines of clear authority, achieved through cross-functional teamwork, and effective peer relationships. Dispersed decision-making is aided by the provision of timely relevant and simple information linked to the task enabling employees to have self-control. Motivation of employees is achieved through the development of all of their competencies, through meaningful rewards, and clear promotion and career plans designed for each employee in partnership with management. Regent employees have a clear view of the link between their role and the corporate goals and strategy, and they have the opportunity to contribute to the direction of the hotel. The strategic use of a culture that reinforces the notion of employees not only planning for their future with the hotel but also, having a key involvement in planning the future of the hotel, ensures increased performance. In this study of the Regent Hotel, we have focussed on the integrating nature of culture and its use as a “driver” of strategy. This view of culture is highly desirable, particularly to the hotel's management. Numerous advantages accrue to the organisation, more complex tasks are easily undertaken that otherwise could not be achieved by individuals; a wider range of new ideas is possible and mutual stimulation increases creativity; groups present an easier coordination task; inputs from a range of perspectives provides distinct benefits to problem-solving situations; and finally, culture can be used as a means of socialisation, where a common message can be given and a common perspective reinforced through group pressure. It must be acknowledged that the researchers in their study of culture at the Regent Hotel, may have found what Louis (1985, p. 79) describes as “for-public-consumption culture”, that is, a portrayal of the character of the organisation that top management would like to see presented, rather than one that truly reflects the existing culture. Thus, further investigation of the culture of The Regent Hotel and a re-examination of our evidence should be undertaken in order to find evidence that points to differentiation in the hotel's culture. The focus needs to be on the existence of subcultures, the “islands of clarity in a sea of ambiguity” (Martin, 1992). The notion of “shared meaning” is still likely to be present however. Rather than seeing it as shared across the organisation, for a more comprehensive examination of the culture present at the Regent Hotel, it is more fruitful to view culture as shared with subcultures. Although dimensions of organisational culture permeate all functional areas of business it seems fair to say that much of the management literature has neglected its importance for strategy implementation. It is no easy task to uncover the cultural artefacts and those more basic values and beliefs that comprise organisational culture but they can represent some of the more important strengths and weaknesses of any hospitality organisation bearing on its performance. As such, they are deserving of further study in different firms and in different locations. The salient point of our discussion above is that strategists should perceive their firm as a “sociocultural system”. A major challenge of strategic management today is to bring about changes in organisational culture and individual mind sets necessary to support the formulation, implementation and evaluation of strategies to enhance a firms competitive advantage. Further research particularly relevant to the industry would include identification and analysis of subcultures within hospitality organisations, exploration of the influence of deep culture on strategy formulation and implementation, and the role of individual elements of culture on organisation performance of hospitality organisations.