عنوان انگلیسی
To bridge or to bond? Diverse social connections in an IS project team
دانلود فوری مقاله + سفارش ترجمه 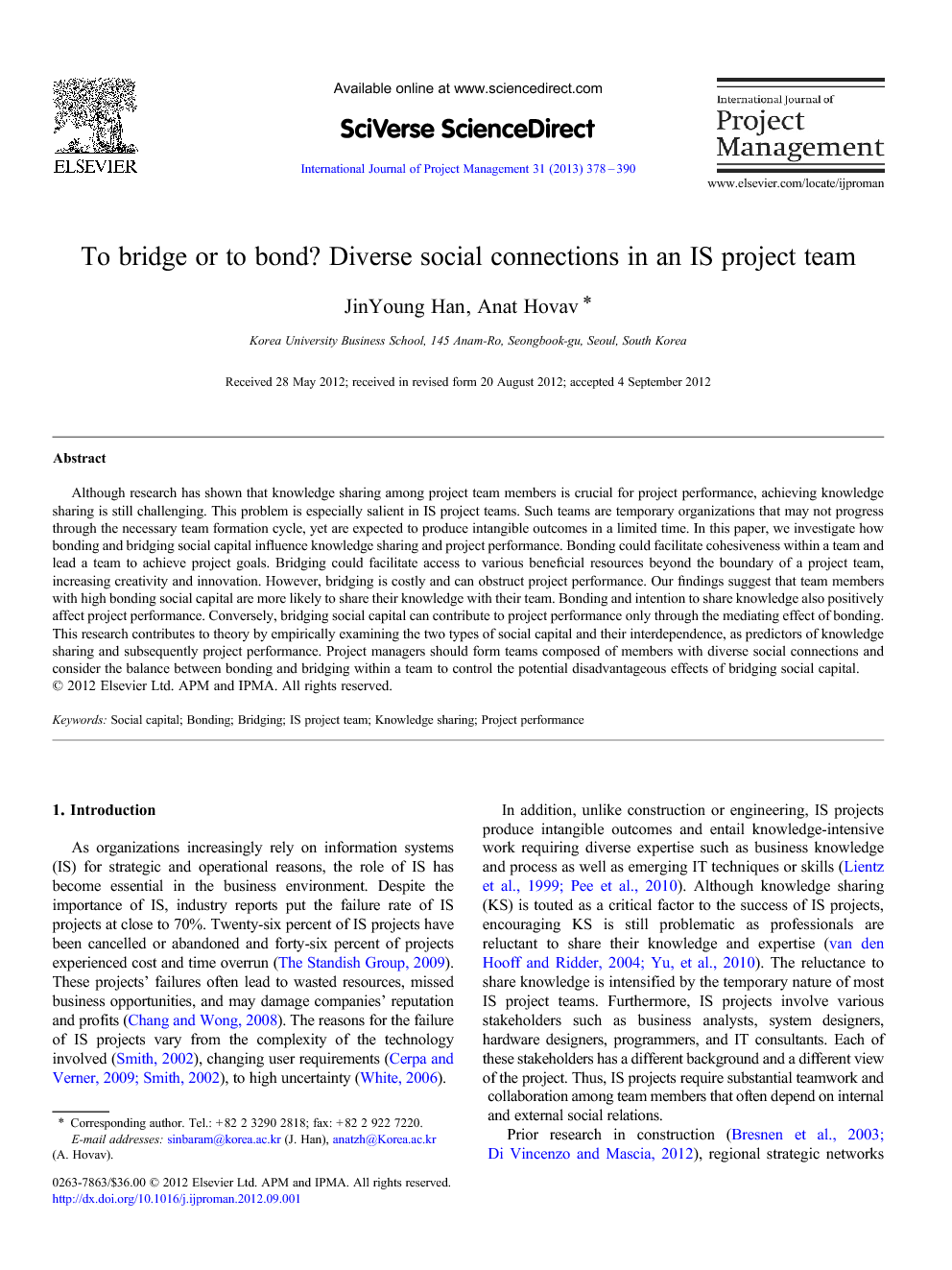 As organizations increasingly rely on information systems (IS) for strategic and operational reasons, the role of IS has become essential in the business environment. Despite the importance of IS, industry reports put the failure rate of IS projects at close to 70%. Twenty-six percent of IS projects have been cancelled or abandoned and forty-six percent of projects experienced cost and time overrun (The Standish Group, 2009). These projects' failures often lead to wasted resources, missed business opportunities, and may damage companies' reputation and profits (Chang and Wong, 2008). The reasons for the failure of IS projects vary from the complexity of the technology involved (Smith, 2002), changing user requirements (Cerpa and Verner, 2009 and Smith, 2002), to high uncertainty (White, 2006). In addition, unlike construction or engineering, IS projects produce intangible outcomes and entail knowledge-intensive work requiring diverse expertise such as business knowledge and process as well as emerging IT techniques or skills (Lientz et al., 1999 and Pee et al., 2010). Although knowledge sharing (KS) is touted as a critical factor to the success of IS projects, encouraging KS is still problematic as professionals are reluctant to share their knowledge and expertise (van den Hooff and Ridder, 2004 and Yu et al., 2010). The reluctance to share knowledge is intensified by the temporary nature of most IS project teams. Furthermore, IS projects involve various stakeholders such as business analysts, system designers, hardware designers, programmers, and IT consultants. Each of these stakeholders has a different background and a different view of the project. Thus, IS projects require substantial teamwork and collaboration among team members that often depend on internal and external social relations. Prior research in construction (Bresnen et al., 2003 and Di Vincenzo and Mascia, 2012), regional strategic networks (Eklinder-Frick et al., 2011), film-making and media (DeFillippi and Arthur, 1998), and IS projects (Hatzakis et al., 2005 and Newell et al., 2004) suggests that social capital (SoC) among project members can improve project performance. Yet, to the best of our knowledge, no prior work has measured the relationships between bonding (internal SoC), bridging (external SoC), knowledge sharing and project performance in the context of IS or elsewhere. The goal of this study is to understand and validate the influence of bonding and bridging SoC on the underlying process affecting KS, and subsequently perceived project performance. We use data collected from individuals involved in IS projects for the following reasons: (1) the high number of failed IS projects renders them an interesting case, (2) we believe that IT services is a prime example of a project-based industry in which new system development involves not only non-routine processes, but also complex inter-professional and inter-organizational contractual and working relationships, and (3) the transitory, short-term nature of IS project teams augment the interplay between bonding and bridging. This paper is organized as follows. In the next section, we introduce the theoretical foundations of our research. The following section describes the research model and hypotheses. In section four, we describe the research methodology. Section five presents the analysis and results. Several limitations and implications of the study and future research directions are discussed in section six.

6.1. Contributions This study contributes to previous research in several ways. To the best of our knowledge, there are no prior studies that examined and empirically validated the interdependence between bonding and bridging SoC in project teams. Most prior research on the relationships between knowledge sharing and social capital dealt with either bonding or bridging. In this study, we investigated the relationships between project performance, and bonding and bridging. This is important due to the contradictory beliefs regarding the effect of bridging on knowledge sharing and project success. Our results suggest that both types of social capital contribute to knowledge sharing within a team, subsequently improving project performance. However, while bonding has a direct influence on knowledge sharing, bridging has an indirect (via bonding) effect on knowledge sharing. In addition, we quantified and validated the three dimensions of bridging and bonding. This adds to our understanding of the underlying process in which social capital helps project teams. We employed a formative second-order construct for each type of social capital. Our measurement model confirmed the measurements adapted from or developed in prior studies. The three dimensions (i.e., structural, relational, and cognitive) support bonding and bridging social capital, providing a richer explanation about the role of social capital in an IS project context. Although practitioners recognize the role of knowledge sharing in project success, knowledge sharing is still problematic since professionals are reluctant to share their expertise. Our results suggest that through bonding, project teams can improve knowledge sharing and project performance. Furthermore, to exploit the advantages of bridging (i.e., access to external knowledge), actors with strong bridging ties should be encouraged to develop strong internal ties. Thus, project managers should realize the importance of bonding among team members and foster a work environment supportive of bonding. This is especially important in transitory and temporary teams. For example, it can be a challenge for team members to trust each other and commonly understand task-related knowledge in IS projects since an IS project team, as a temporary organization, is composed of individuals from various backgrounds.1 Thus, project managers should try to foster bonding within a team immediately upon the formation of the team. Hence, team-building sessions such as brainstorming and focus group sessions, could be useful to improve team members' trust and increase the number of connections among team members. The effect of bridging on knowledge sharing and project performance also depends on the existence of bonding. Although team members' external links could provide access to innovative and creative knowledge, team members are more likely to share their acquired knowledge if they have developed strong InTie, InTrust, InNorm, and TMM. The results imply that project managers need to consider the balance between bonding and bridging within a team when they select their team members. For example, in the Korean context where collectivistic culture is dominant, project managers can try to select people who have strong external ties and access to external innovative ideas since bonding is inherently stronger than bridging. On the other hand, a project manager for a global team can choose people who are team players and can easily develop bonding within their team, as the team has enough access to external and diverse knowledge. 6.2. Limitations and future research Some limitations should be considered. First, the data were collected from Korean IS project team members, limiting the generalizability of the findings due to cultural influences and localized business practices. As the influence of global teams grows in IS development, cultural differences will become an important issue for IS project management. The effect of cultural differences among team members should be investigated in future research. Second, the project performance measured in this study focused on project outcomes. Other factors of project success that influence an organization, individuals, operations, and system usage were not considered (e.g., top management support and users' involvement). This study considered only a very definite set of project success criteria. Since projects aim to further organizational objectives, future work should consider the improvements of organizational goals in addition to projects' performance. Project success could then be measured at the organizational level rather than at the project level. Third, even though we applied the two-stage approach for formative second-order constructs, interpretational confounding may occur when the empirical meaning assigned to an unobserved variable differs from the meaning assigned to that variable by the researcher prior to estimating the unknown parameters. The results should be interpreted and generalized with caution. Fourth, this study did not account for individual characteristics and human emotions. Team members' emotions could affect pro-social behavior such as knowledge sharing. For example, a team member might be more willing to share their expertise or skills with team members when the member satisfactorily completes his/her work. On the other hand, the team member's willingness to share knowledge would decline when the member worries that his/her shared knowledge might be inaccurate. The effect of team members' emotions should be investigated in future research. Finally, this study is limited, like other cross-sectional studies, in attributing and validating causality. Future studies should collect longitudinal data to assess causal relationships. 6.3. Conclusion This study contributes to our understanding of the relationships between bonding, bridging, intention to share knowledge, and IS project performance. The results suggest that bonding positively affect knowledge sharing and project performance. Evidence also suggests that bonding and bridging are not mutually exclusive and that bridging could positively influence knowledge sharing and project performance via bonding. This study also measured and validated bonding and bridging using the three dimensions of social capital as second-order formative constructs.