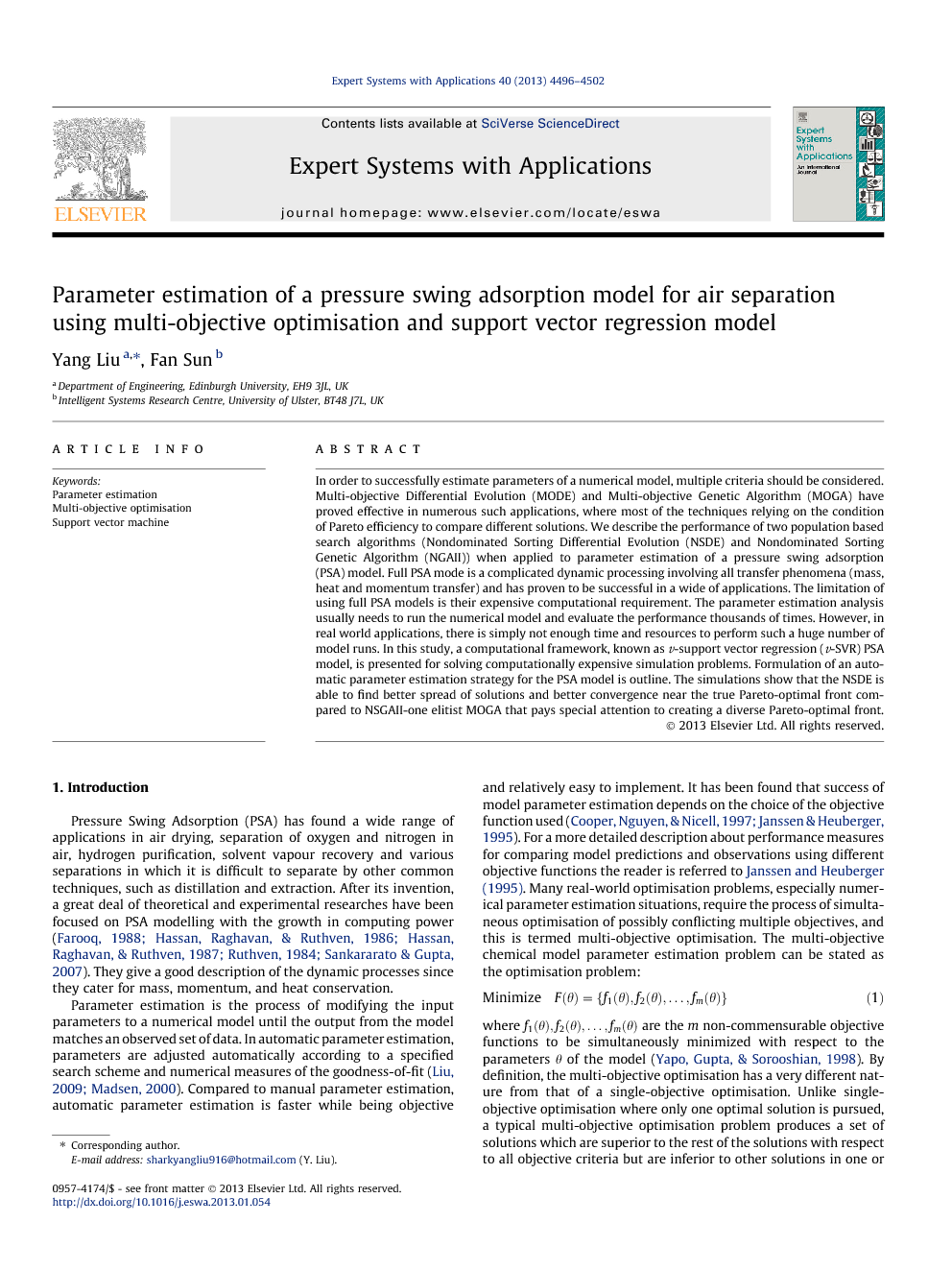 In order to successfully estimate parameters of a numerical model, multiple criteria should be considered. Multi-objective Differential Evolution (MODE) and Multi-objective Genetic Algorithm (MOGA) have proved effective in numerous such applications, where most of the techniques relying on the condition of Pareto efficiency to compare different solutions. We describe the performance of two population based search algorithms (Nondominated Sorting Differential Evolution (NSDE) and Nondominated Sorting Genetic Algorithm (NGAII)) when applied to parameter estimation of a pressure swing adsorption (PSA) model. Full PSA mode is a complicated dynamic processing involving all transfer phenomena (mass, heat and momentum transfer) and has proven to be successful in a wide of applications. The limitation of using full PSA models is their expensive computational requirement. The parameter estimation analysis usually needs to run the numerical model and evaluate the performance thousands of times. However, in real world applications, there is simply not enough time and resources to perform such a huge number of model runs. In this study, a computational framework, known as v-support vector regression (v-SVR) PSA model, is presented for solving computationally expensive simulation problems. Formulation of an automatic parameter estimation strategy for the PSA model is outline. The simulations show that the NSDE is able to find better spread of solutions and better convergence near the true Pareto-optimal front compared to NSGAII-one elitist MOGA that pays special attention to creating a diverse Pareto-optimal front.

In real-world full dynamic pressure swing adsorption simulation problems, the model simulations usually require a large amount of computation time for high resolution data with hundreds or thousands of cycles to attain the stable state. When a limited number of PSA fine grid model runs are available, they can be used to predict purity and recovery of O2 for air separation for a new operating parameter set of the fine gird PSA model. The NSDE and NSGAII algorithms in this paper were applied to estimate the pressure swing adsorption model parameters. Two objective functions, relating to the different aspects of the performance of the PSA process, have been chosen for estimation. The experiments showed that by using NSDE and NSGAII, NSDE achieved a more accurate Pareto set and a better diversity in the obtained front compared to NSGAII. The application example demonstrated that significant trade-offs between different objectives exists, implying that single objective function is not able to evaluate all objectives simultaneously. Instead, the parameter estimation analysis is given a set of Pareto ranks for the model parameters.