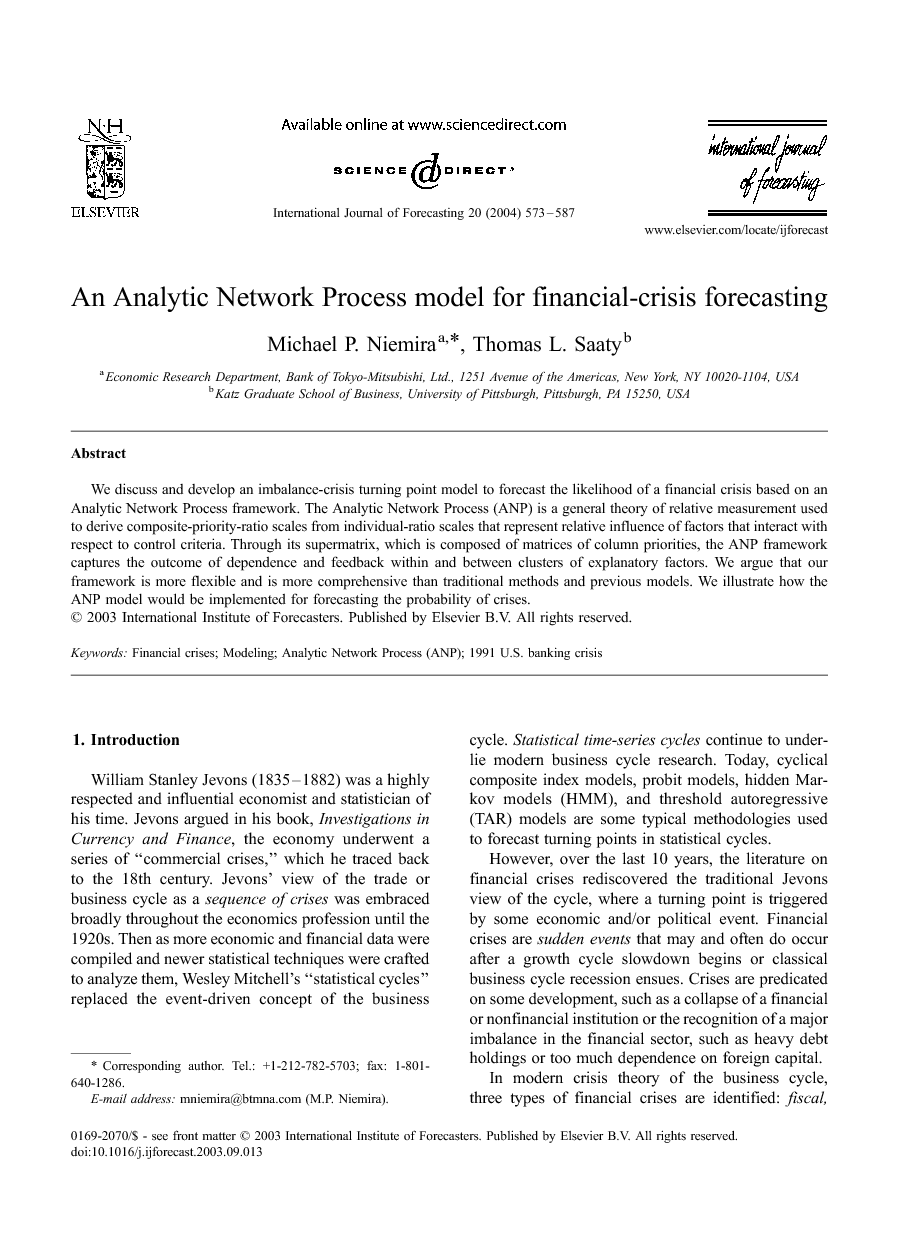 We discuss and develop an imbalance-crisis turning point model to forecast the likelihood of a financial crisis based on an Analytic Network Process framework. The Analytic Network Process (ANP) is a general theory of relative measurement used to derive composite-priority-ratio scales from individual-ratio scales that represent relative influence of factors that interact with respect to control criteria. Through its supermatrix, which is composed of matrices of column priorities, the ANP framework captures the outcome of dependence and feedback within and between clusters of explanatory factors. We argue that our framework is more flexible and is more comprehensive than traditional methods and previous models. We illustrate how the ANP model would be implemented for forecasting the probability of crises.

William Stanley Jevons (1835–1882) was a highly respected and influential economist and statistician of his time. Jevons argued in his book, Investigations in Currency and Finance, the economy underwent a series of “commercial crises,” which he traced back to the 18th century. Jevons' view of the trade or business cycle as a sequence of crises was embraced broadly throughout the economics profession until the 1920s. Then as more economic and financial data were compiled and newer statistical techniques were crafted to analyze them, Wesley Mitchell's “statistical cycles” replaced the event-driven concept of the business cycle. Statistical time-series cycles continue to underlie modern business cycle research. Today, cyclical composite index models, probit models, hidden Markov models (HMM), and threshold autoregressive (TAR) models are some typical methodologies used to forecast turning points in statistical cycles. However, over the last 10 years, the literature on financial crises rediscovered the traditional Jevons view of the cycle, where a turning point is triggered by some economic and/or political event. Financial crises are sudden events that may and often do occur after a growth cycle slowdown begins or classical business cycle recession ensues. Crises are predicated on some development, such as a collapse of a financial or nonfinancial institution or the recognition of a major imbalance in the financial sector, such as heavy debt holdings or too much dependence on foreign capital. In modern crisis theory of the business cycle, three types of financial crises are identified: fiscal, banking, and currency(Sachs, 1998). A fiscal crisis occurs when a government cannot roll over foreign debt and/or attract new loans. A currency crisis occurs when investors shift demand to foreign-denominated assets and away from domestic assets. A banking crisis occurs when a bank cannot attract enough new deposits to meet sudden withdrawal of reserves. Each of these crises can exist independently or in conjunction with one or more other crisis. Statistical data needed to track and to forecast a potential financial-crisis point can be somewhat illusive from country to country. Data limitations exist especially in some emerging market economies that have undergone major structural change. In those countries, historical data are no longer consistent with the present institutions and, as such, are insufficient to signal a financial crisis before it occurs. Even when data exist, judgmental variables play a role in statistical models, as witnessed by the “freedom from corruption” qualitative variable in the probit model by Radelet and Sachs (1998). For these reasons, we propose a flexible and comprehensive framework to simultaneously model and forecast the three types of financial crisis using an Analytic Hierarchy Process (AHP) with feedback, which is known as the Analytic Network Process (ANP) as developed and implemented by Saaty (1996). The Analytic Network Process also provides a structure that potentially can reduce judgmental forecast error through improved “reliability of information processing.”1 The modeling application in this paper extends the ANP recession forecasting model by Blair, Nachtmann, Saaty, and Whitaker (2002) to capture key economic concepts specified in the financial-crisis econometric model by Kaminsky and Reinhart (1999), the contagion econometric model by Lowell, Neu, and Tong (1998), as well as the studies by Aziz, Caramazza, and Salgado (2000), Burns (1969), Glick and Moreno (1999), International Monetary Fund (1998), Kindleberger (1996), and Wolfson (1994). Our ANP financial crisis model's determinants are directly specified using quantitative and qualitative variables and empirically tested using an “expert system” approach instead of a true “expert opinion” approach—as the Blair study did—to allow for an historical back-test.

As a practical matter, Kahneman and Tversky (1973) observed that, “In making predictions and judgments under uncertainty, people do not appear to follow the calculus of chance or the statistical theory of prediction. Instead, they rely on a limited number of heuristics.” This especially may be true when data limitations make a timely statistical forecast impossible. However, ANP offers a judgmental forecasting structure to evaluate those heuristics in a consistent manner. In our paper, we presented a multiple criteria decision-making model with feedback to forecast financial crises using Saaty's Analytic Network Process. The model was back-tested for a period in the early 1990s when there was a banking crisis in the United States. It was not our intent to evaluate any individual forecaster's ability or collective forecasting accuracy, per se, but to evaluate the potential robustness of the crisis forecasting model's structure, which in turn might be used for real-time judgmental forecasting. We found that the ANP model approach indeed was a promising methodology to forecast the likelihood of event-driven cycles.