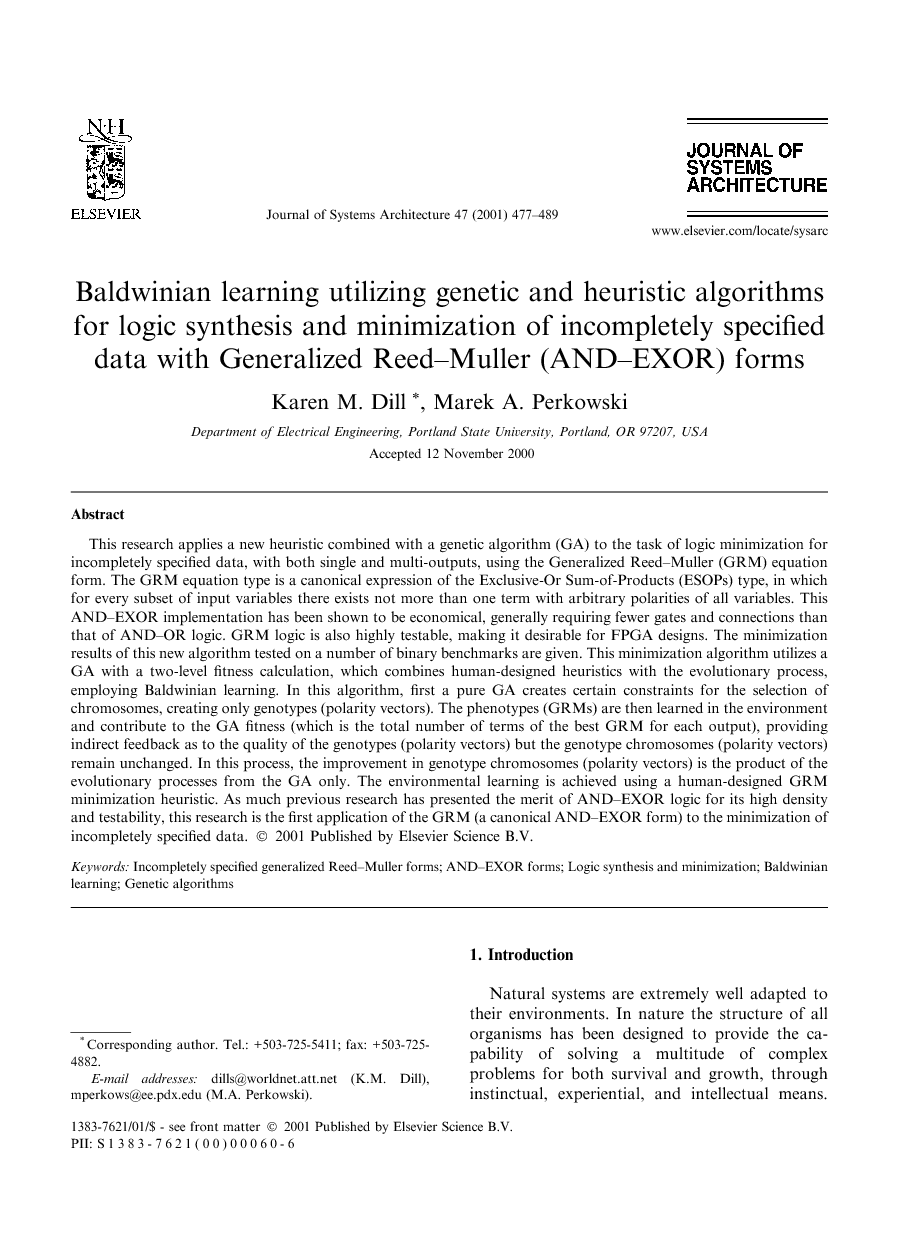 This research applies a new heuristic combined with a genetic algorithm (GA) to the task of logic minimization for incompletely specified data, with both single and multi-outputs, using the Generalized Reed–Muller (GRM) equation form. The GRM equation type is a canonical expression of the Exclusive-Or Sum-of-Products (ESOPs) type, in which for every subset of input variables there exists not more than one term with arbitrary polarities of all variables. This AND–EXOR implementation has been shown to be economical, generally requiring fewer gates and connections than that of AND–OR logic. GRM logic is also highly testable, making it desirable for FPGA designs. The minimization results of this new algorithm tested on a number of binary benchmarks are given. This minimization algorithm utilizes a GA with a two-level fitness calculation, which combines human-designed heuristics with the evolutionary process, employing Baldwinian learning. In this algorithm, first a pure GA creates certain constraints for the selection of chromosomes, creating only genotypes (polarity vectors). The phenotypes (GRMs) are then learned in the environment and contribute to the GA fitness (which is the total number of terms of the best GRM for each output), providing indirect feedback as to the quality of the genotypes (polarity vectors) but the genotype chromosomes (polarity vectors) remain unchanged. In this process, the improvement in genotype chromosomes (polarity vectors) is the product of the evolutionary processes from the GA only. The environmental learning is achieved using a human-designed GRM minimization heuristic. As much previous research has presented the merit of AND–EXOR logic for its high density and testability, this research is the first application of the GRM (a canonical AND–EXOR form) to the minimization of incompletely specified data.

Herein a GA utilizing Baldwinian learning, to incorporate both a human-designed logic heuristic and a pure GA, is applied to illustrate iGRMMIN, the first algorithm that minimizes incompletely specified data with GRM forms. As the AND–EXOR logic is generally more economical than AND–OR logic, requiring fewer logic gates and interconnections, it is often a good alternative form for logic design. (Recall that modern EDA tools first decompose the circuit to AND–OR and AND–EXOR realizable blocks). The GRM forms were selected for this research since they are a good trade-off between cost and high testability [21]. The software implementation of the iGRMMIN minimization algorithm was tested over a number of benchmarks. Since incompletely specified benchmarks are not available, they were constructed. Starting with completely specified MCNC benchmarks, a given percentage of outputs were randomly selected for changing to don't cares. These new benchmarks are available from our research group's web site at www.ee.pdx.edu/polo/function/MCNC_incompletely_specified. Minimization test results are given for benchmarks containing 25%, 50%, 75%, and 95% don't cares. Since no other minimization software for incompletely specified data with GRMs exists, no comparisons are made. The future extension of this new algorithm to multi-valued logic, using Galois Field algebra [1] and [41], is possible. Additional methods for the improvement of the heuristic generation of GRMs are presented in [9]