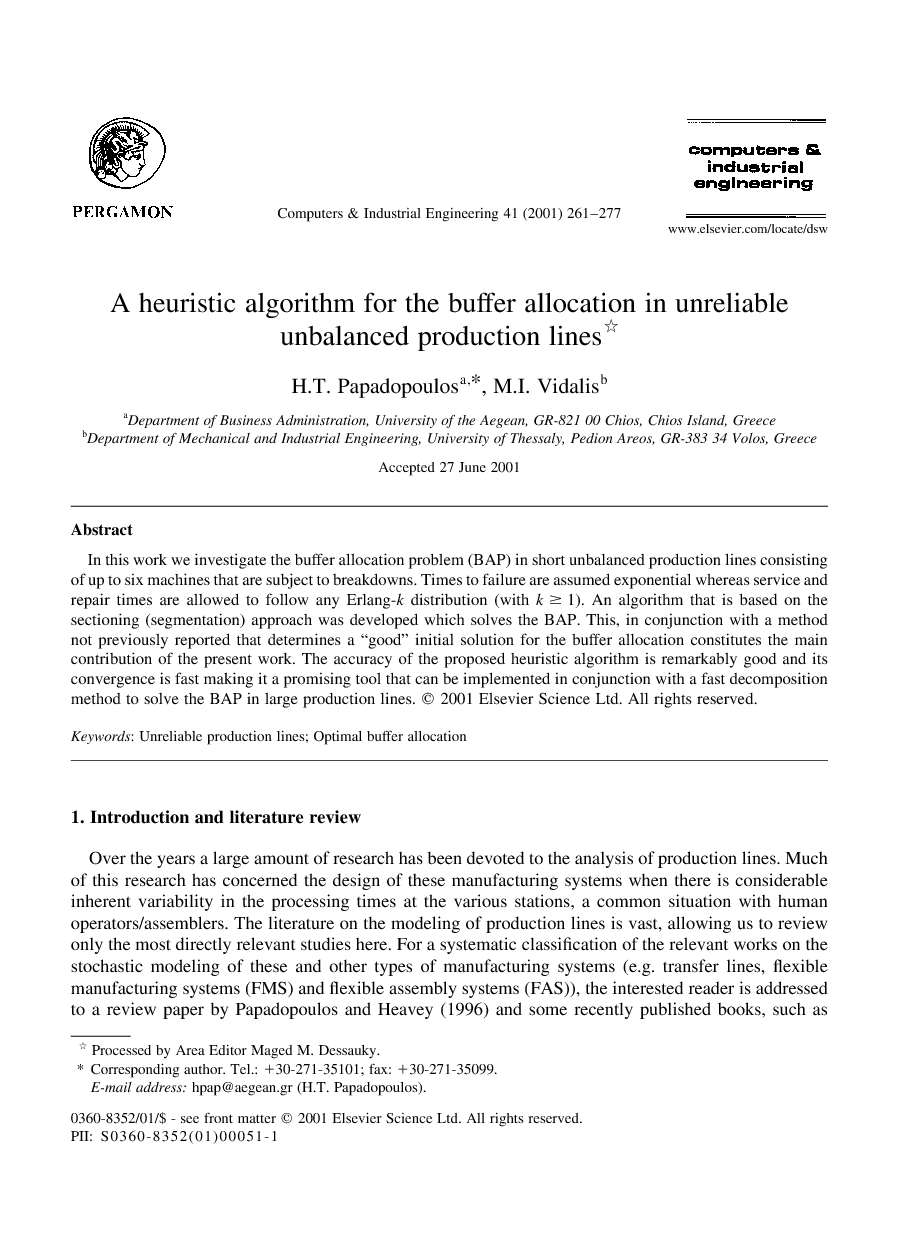 In this work we investigate the buffer allocation problem (BAP) in short unbalanced production lines consisting of up to six machines that are subject to breakdowns. Times to failure are assumed exponential whereas service and repair times are allowed to follow any Erlang-k distribution (with k≥1). An algorithm that is based on the sectioning (segmentation) approach was developed which solves the BAP. This, in conjunction with a method not previously reported that determines a “good” initial solution for the buffer allocation constitutes the main contribution of the present work. The accuracy of the proposed heuristic algorithm is remarkably good and its convergence is fast making it a promising tool that can be implemented in conjunction with a fast decomposition method to solve the BAP in large production lines.

In this work, we presented ‘PaVi’, an algorithm for solving the BAP in an unreliable unbalanced production line. To our knowledge, the solution of the OBA problem in general production lines has been attempted by very few researchers, so far. More specifically, only Seong et al. (1995) proposed two heuristic algorithms to solve the problem in exponential lines. In our model, the service and repair times are allowed to follow any Erlang distribution with k and m phases, respectively, whereas the times to failure are assumed to be exponential. The main contribution of the proposed algorithm relies on the determination of a “good” initial buffer vector which is found by exploiting the information about the parameters of the production line, that is, the mean service rates, μi's, the mean repair rates, ri's and the mean failure rates, βi's. Then based on this information, the stations of the line are ordered according to the value of the mean effective service rates, ρi's, starting with the bottleneck station and ending with the faster one. Some priority rules are utilized and the initial buffer capacities are determined based on a linear buffer allocation scheme, not previously reported. After the determination of the initial buffer vector, a sectioning search method is called to search for the OBA. This method searches for each variable in two directions, one buffer slot up and one down of a certain value of the decision variables, which are the buffer capacities. The optimal buffer allocation was found in almost all the cases (above 97% of the 373 experiments we have tried) and in the cases where the heuristic algorithm fails to find the OBA, the solution was near optimal. We believe that the proposed idea of using a “good” initial buffer allocation can speed up the solution to the BAP in a production line of any size. It is the evaluation tool that restricts the applicability of the proposed heuristic algorithm and not the search algorithm itself. We could not solve large production lines because we used the proposed search algorithm in combination with the exact evaluative algorithm by Heavey et al. (1993) for the calculation of the mean throughput of the lines. The latter is restricted by the computer memory and cannot solve large systems of linear equations. In general, we propose use of the ‘PaVi’ search algorithm in conjunction with the evaluative algorithm of Heavey et al. (1993) or that by Hillier and Boling (1967) for short lines (up to six stations) and of a good decomposition algorithm (say that by Choong and Gershwin (1987) or the one by Glassey and Hong (1983)) for longer production lines. This is an area for further investigation. Another area for further improvement would be to focus more on finding an even better initial solution by further exploiting our knowledge about the criticality of the unreliable stations of the line. In general, the use of a “good” initial solution is a critical point to find a fast solution. This criticality has to be quantified and used in the first step of the search algorithm. A potential alternative might be a linear approach for deriving “good” initial solutions which would reflect, for example, on the values of the stages parameters ρi's (not necessarily in a linear fashion), not just their size order. In this way, both the number of iterations will be reduced and the accuracy of the algorithm will be further improved, that is, to obtain the OBA in all cases.