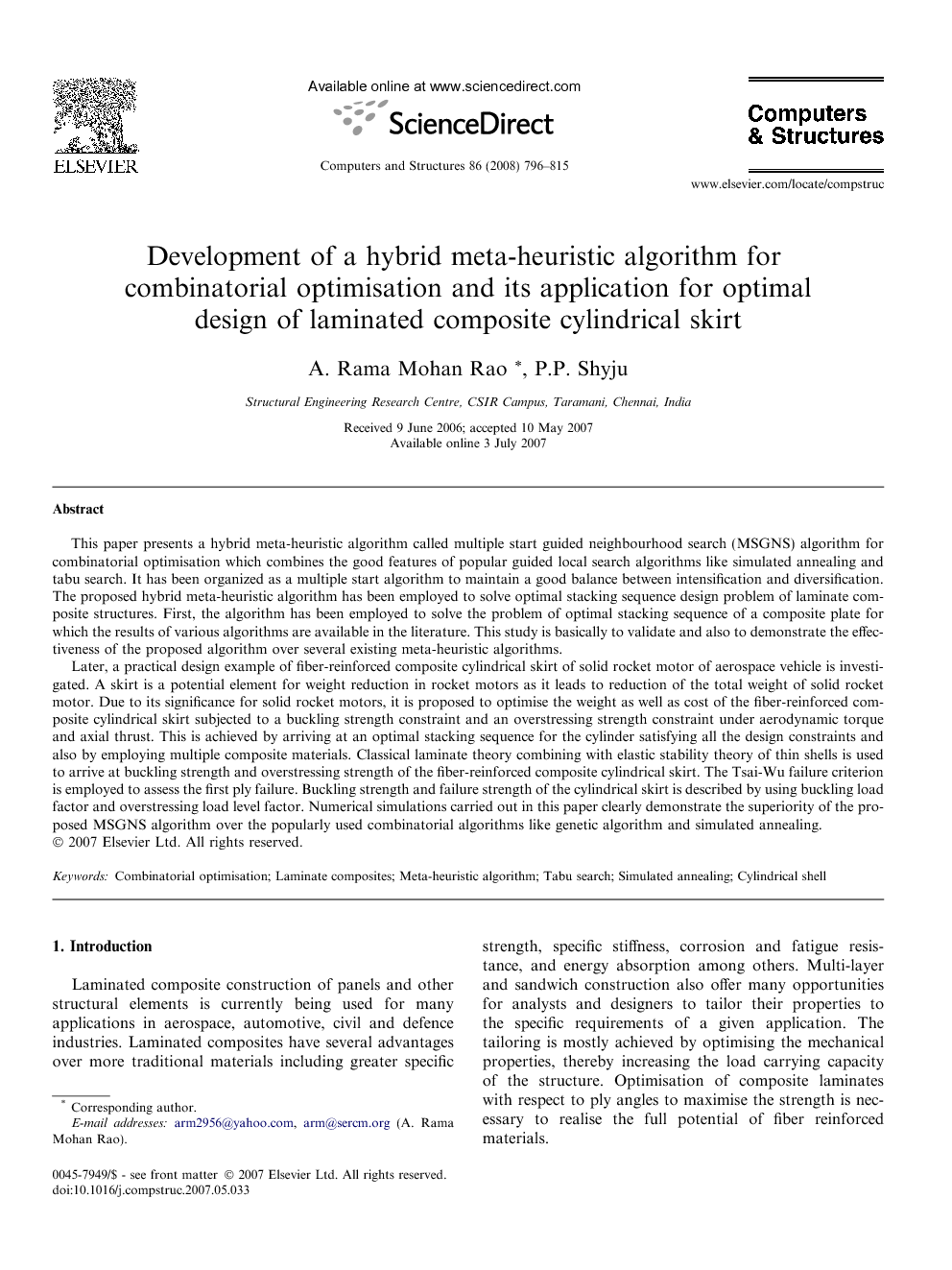 This paper presents a hybrid meta-heuristic algorithm called multiple start guided neighbourhood search (MSGNS) algorithm for combinatorial optimisation which combines the good features of popular guided local search algorithms like simulated annealing and tabu search. It has been organized as a multiple start algorithm to maintain a good balance between intensification and diversification. The proposed hybrid meta-heuristic algorithm has been employed to solve optimal stacking sequence design problem of laminate composite structures. First, the algorithm has been employed to solve the problem of optimal stacking sequence of a composite plate for which the results of various algorithms are available in the literature. This study is basically to validate and also to demonstrate the effectiveness of the proposed algorithm over several existing meta-heuristic algorithms. Later, a practical design example of fiber-reinforced composite cylindrical skirt of solid rocket motor of aerospace vehicle is investigated. A skirt is a potential element for weight reduction in rocket motors as it leads to reduction of the total weight of solid rocket motor. Due to its significance for solid rocket motors, it is proposed to optimise the weight as well as cost of the fiber-reinforced composite cylindrical skirt subjected to a buckling strength constraint and an overstressing strength constraint under aerodynamic torque and axial thrust. This is achieved by arriving at an optimal stacking sequence for the cylinder satisfying all the design constraints and also by employing multiple composite materials. Classical laminate theory combining with elastic stability theory of thin shells is used to arrive at buckling strength and overstressing strength of the fiber-reinforced composite cylindrical skirt. The Tsai-Wu failure criterion is employed to assess the first ply failure. Buckling strength and failure strength of the cylindrical skirt is described by using buckling load factor and overstressing load level factor. Numerical simulations carried out in this paper clearly demonstrate the superiority of the proposed MSGNS algorithm over the popularly used combinatorial algorithms like genetic algorithm and simulated annealing.

This paper proposes a multiple start guided neighbourhood search (MSGNS) algorithm for combinatorial optimisation and has been applied to optimal design of laminate composite cylindrical skirt subjected to buckling and overstressing constraints. The proposed meta-heuristic algorithm makes use of the good features of guided search algorithms like simulated annealing and tabu search. The multi-start algorithm overcomes sensitivities of basic SA on cooling schedule. The exploratory search characteristics of the algorithm are also strengthened by embedding a tabu list which records recently visited search patterns and prevents recycling. Initially, Numerical studies have been conducted by solving problems given in the literature for buckling load maximisation and have been compared with the best known results available in the literature. These numerical investigations clearly indicated that the proposed MSGNS algorithm generates stacking sequences which are either comparable or superior to the best known results and are computationally efficient than GA. The proposed MSGNS algorithm runs with several neighbourhood search algorithms. Among all the neighbourhood search techniques presented in this paper, adaptive neighbourhood search technique found to be effective and also maintains relatively higher computational efficiency. The normalized price is considered as a measure of computational performance of the algorithm for the reasons already outlined in the paper. MSGNS algorithm is as effective as genetic algorithm in obtaining multiple near optimal solutions as is evident from the studies presented in Table 6. The comparisons of MSGNS algorithm for stacking sequence optimisation of laminate composites with other popular meta-heuristic algorithms like genetic algorithm, simulated annealing, scatter search indicate that the computational performance of MSGNS is also found to be superior for the problems solved in the paper. The proposed MSGNS algorithm has been used for optimal stacking sequence design of composite cylindrical skirt made of two materials for simultaneously minimising the cost as well as the weight with a constraint on buckling and overstressing. An attempt has been made to construct pareto-optimal front by optimising a series of composite objective functions combining weight and cost by varying the respective weightages of the two objective functions with constraint on buckling and strength. Numerical studies indicate that the trade-off solutions can be obtained for the multi-objective problem employing the proposed MSGNS algorithm. When cost is a primary consideration the laminated composite skirt is made from glass-epoxy and when weight is a primary consideration, it was made of graphite-epoxy. Compromise designs can easily be selected from the trade-off solutions.