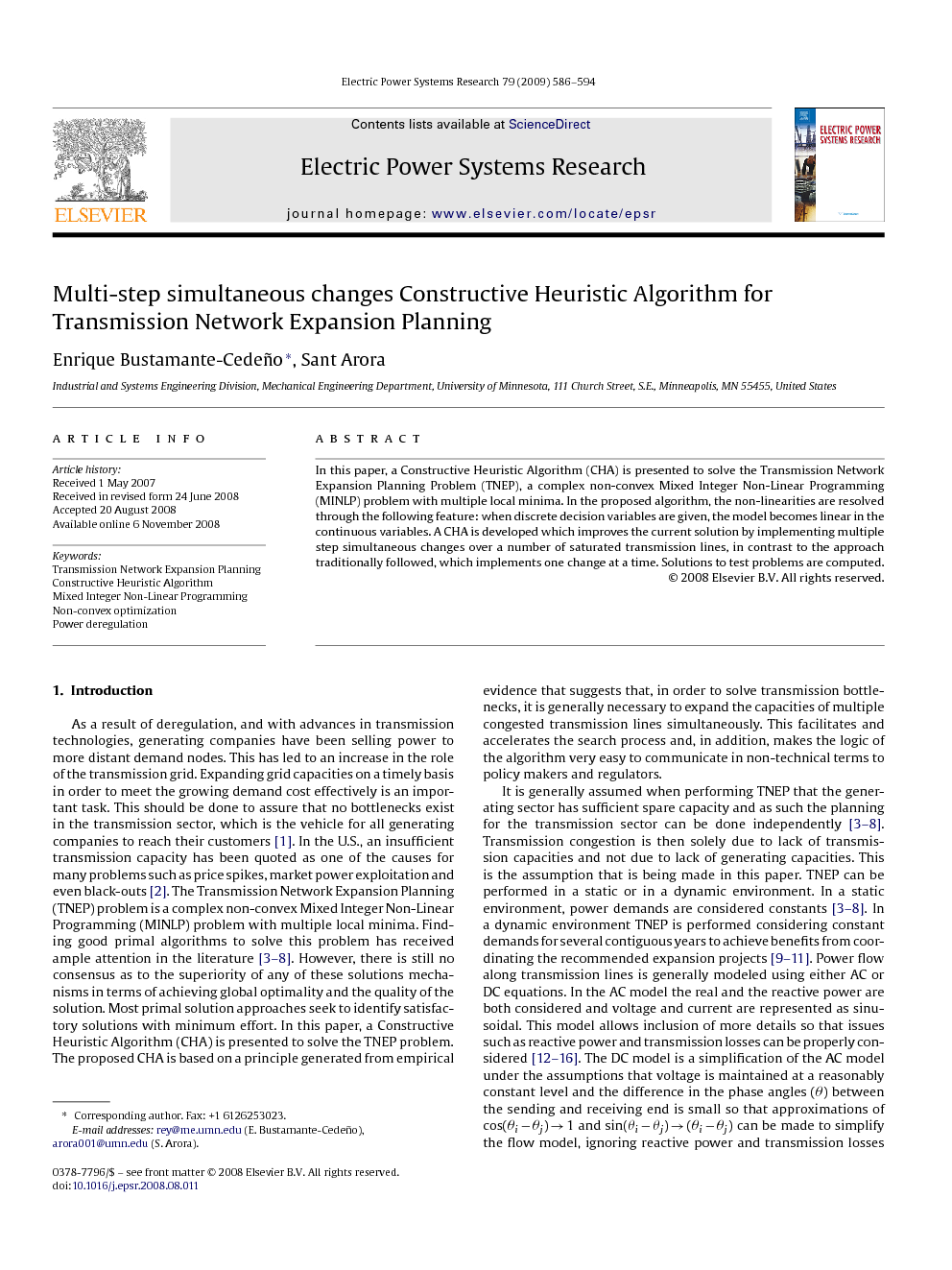 In this paper, a Constructive Heuristic Algorithm (CHA) is presented to solve the Transmission Network Expansion Planning Problem (TNEP), a complex non-convex Mixed Integer Non-Linear Programming (MINLP) problem with multiple local minima. In the proposed algorithm, the non-linearities are resolved through the following feature: when discrete decision variables are given, the model becomes linear in the continuous variables. A CHA is developed which improves the current solution by implementing multiple step simultaneous changes over a number of saturated transmission lines, in contrast to the approach traditionally followed, which implements one change at a time. Solutions to test problems are computed.

In this paper, a CHA was developed to solve the TNEP problem. Because the TNEP problem is a non-convex MINLP with multiple local minima, achieving a global optimal solution is extremely difficult. Due to the complexity of this problem most of the approaches which seek to solve it are primal based; they do not guarantee convergence to a global solution, nor do they allow an assessment as to the quality of the solution as compared to the unknown optimal value. Currently, there are no primal-dual approaches successfully applied to the TNEP to overcome these limitations. As a primal approach, the CHA presented here shares the limitations enumerated above. However, the proposed algorithm attempts to improve the search process by exploiting the feature whereby the non-linearities in the model are resolved when the values of the discrete variables are given, making it a linear programming problem in the continuous variables. The search process is also improved by making multiple simultaneous increases in transmission capacities over a number of congested transmission lines, in contrast to the traditional approach of making one increase at a time in the capacity of a transmission line. As contrasted to several other heuristic algorithms that have been applied to the TNEP problem this algorithm reduces the probability of becoming trapped in local minima, as an iterative step is more likely to take the search to a different neighborhood on account of the several simultaneous multi-step changes which are made. Another important feature of the algorithm is that its search principle, which is based on increasing the transmission capacities of multiple congested transmission lines, is easy to communicate and explain to practitioners and policy makers. This is the case because it can be supported with empirical evidence.