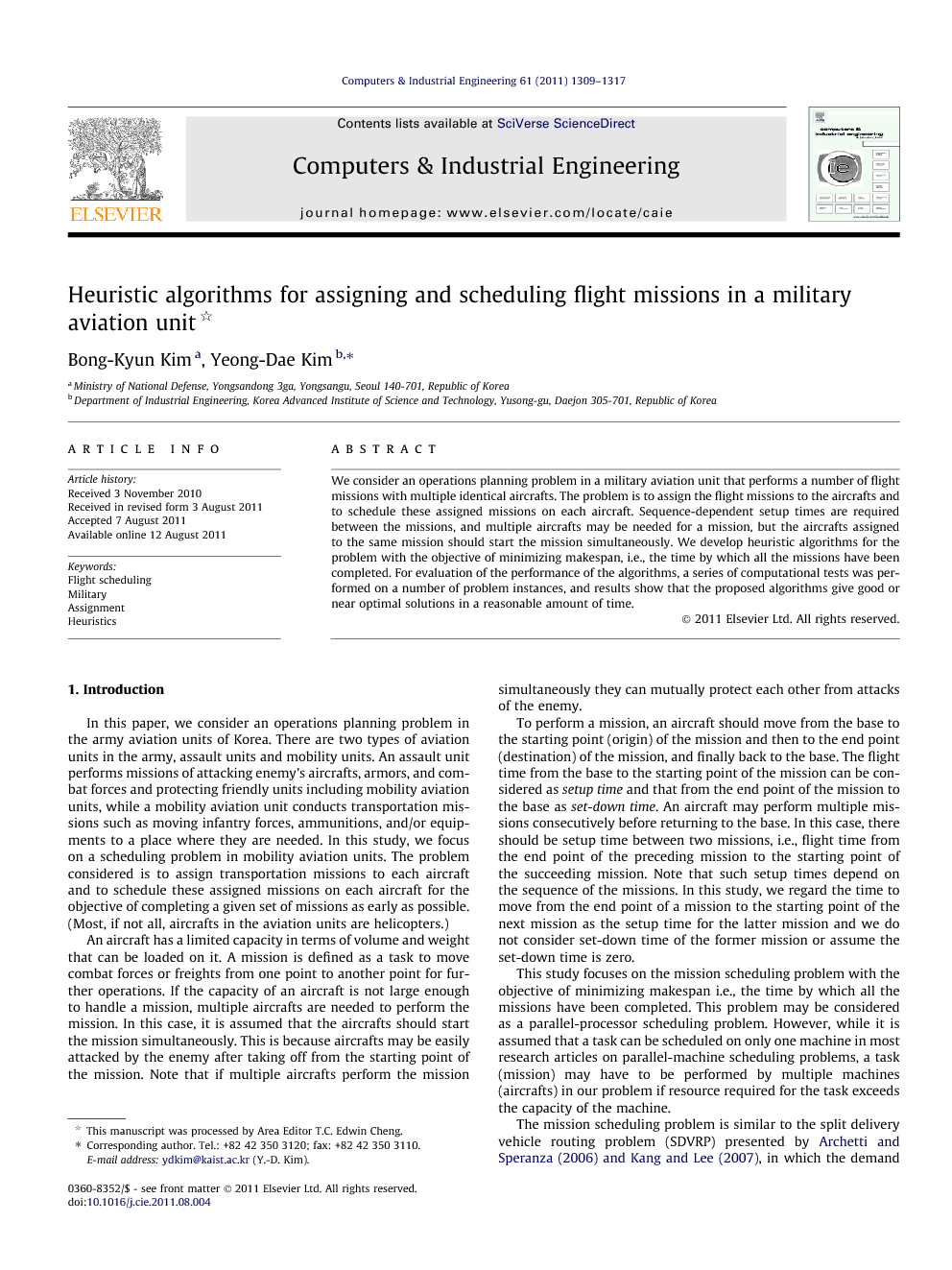 We consider an operations planning problem in a military aviation unit that performs a number of flight missions with multiple identical aircrafts. The problem is to assign the flight missions to the aircrafts and to schedule these assigned missions on each aircraft. Sequence-dependent setup times are required between the missions, and multiple aircrafts may be needed for a mission, but the aircrafts assigned to the same mission should start the mission simultaneously. We develop heuristic algorithms for the problem with the objective of minimizing makespan, i.e., the time by which all the missions have been completed. For evaluation of the performance of the algorithms, a series of computational tests was performed on a number of problem instances, and results show that the proposed algorithms give good or near optimal solutions in a reasonable amount of time.

In this paper, we proposed heuristic algorithms for a mission assignment and scheduling problem in a military aviation unit with the objective of minimizing makespan. We considered situations in which a flight mission is to be performed by one or more aircrafts and tasks for a mission should be started simultaneously if multiple aircrafts are needed for the mission. In the heuristics, solutions are represented with sequences of missions, and we presented methods to convert a (partial) sequence of missions into a solution (assignment and schedule). We proposed two-phase heuristic algorithms in which an initial solution is obtained in the first phase and it is improved in the second phase. Results of experimental tests showed that the proposed heuristics give good or near-optimal solutions within a reasonable amount of computational time. This research can be extended in several directions. For example, metaheuristics such as tabu search, simulated annealing, and genetic algorithms can be used in the second phase (if more time is allowed for mission assignment and scheduling). In this research, it is assumed that the number of aircrafts required for a mission is given and fixed. However, in many cases, where tasks for a mission can be performed sequentially (not simultaneously), the operations planning officer of an aviation unit can or may have to determine the number of aircrafts to perform each mission. In this case, an aircraft can perform multiple unit-jobs of a mission, and individual unit-jobs need to be assigned to the aircrafts. Also, one needs to consider cases in which there are different types of aircrafts and certain missions require specific and/or multiple types of aircrafts with different capacities from different aviation units. Although we focused on the aircraft mission scheduling problem in this research, the solution methods proposed in this study may be applied (after certain modifications if needed) to other practical applications, such as diagnostic test in multicomputer systems (Krawczyk & Kubale, 1985), target assignment and fire sequencing (Kwon, Lee, & Park, 1997), berth allocation in a container terminal (Guan, Xiao, Cheung, & Li, 2002), and operation of real-time machine-vision systems (Oğuz & Ercan, 2005), where a job can be processed by a number of machines at the same time.