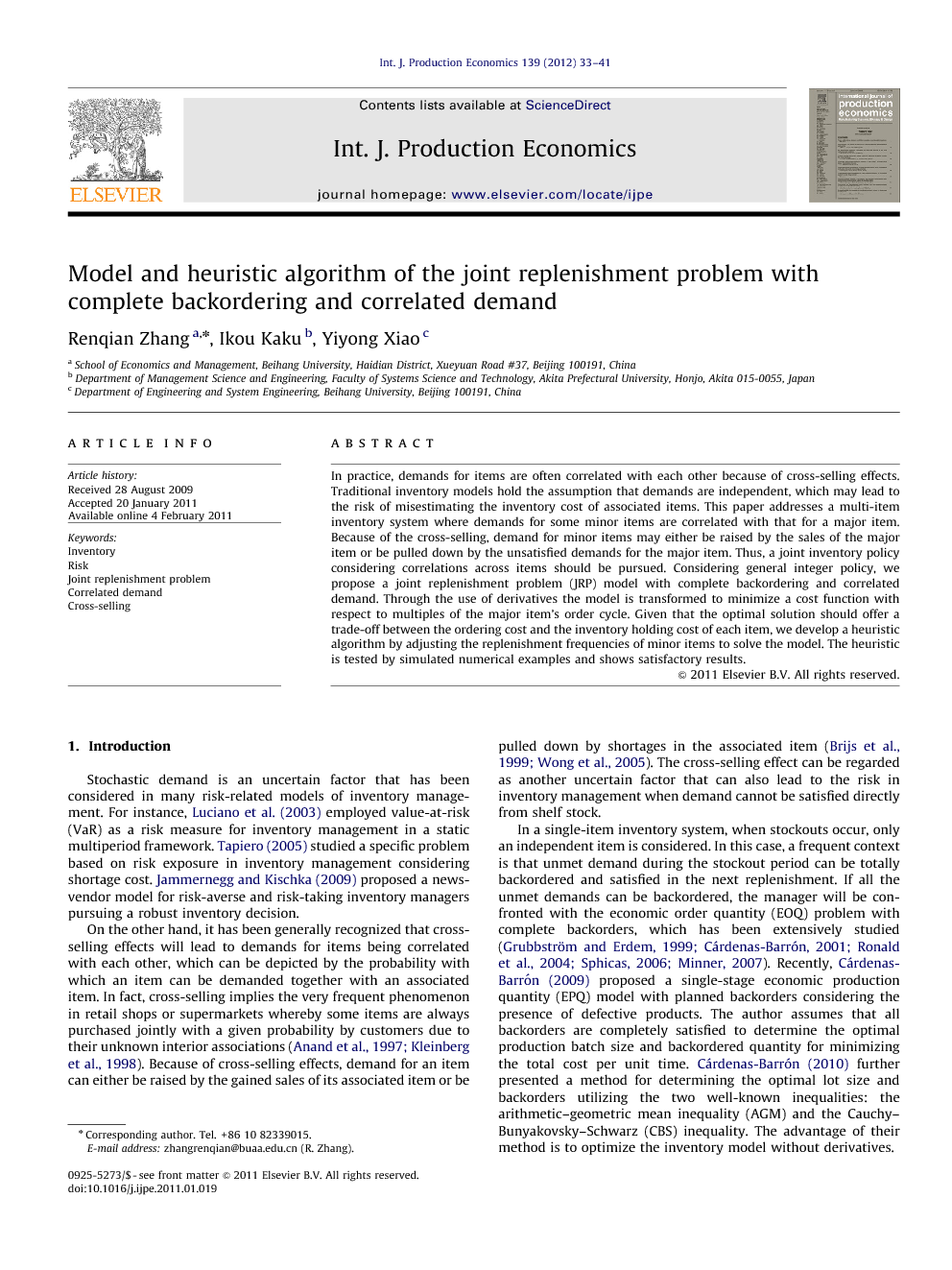 In practice, demands for items are often correlated with each other because of cross-selling effects. Traditional inventory models hold the assumption that demands are independent, which may lead to the risk of misestimating the inventory cost of associated items. This paper addresses a multi-item inventory system where demands for some minor items are correlated with that for a major item. Because of the cross-selling, demand for minor items may either be raised by the sales of the major item or be pulled down by the unsatisfied demands for the major item. Thus, a joint inventory policy considering correlations across items should be pursued. Considering general integer policy, we propose a joint replenishment problem (JRP) model with complete backordering and correlated demand. Through the use of derivatives the model is transformed to minimize a cost function with respect to multiples of the major item's order cycle. Given that the optimal solution should offer a trade-off between the ordering cost and the inventory holding cost of each item, we develop a heuristic algorithm by adjusting the replenishment frequencies of minor items to solve the model. The heuristic is tested by simulated numerical examples and shows satisfactory results.

If items are associated with each other because of cross-selling effects, making an inventory policy following the traditional inventory model may lead to the risk of misestimating the inventory cost. This paper presents an approach for hedging the inventory risk by considering the possible associations between items in a new JRP model with complete backordering and correlated demand. The paper makes two contributions that are different from the traditional JRP. The first is that the unmet demand for the major item can be backordered. The second is that if the major item is stocked out, the sales of minor items will be pulled down to a certain degree until the next replenishment. Through our analytical method, we observed that the optimal value of the fill rate is determined by the known parameters. Based on this fact, the model was transformed to an equivalent formulation with respect to the multiples of the major item's supply cycle. To solve the model, we proposed a heuristic algorithm based on the principle that the optimal inventory policy should balance the ordering cost and the sum of the inventory holding cost and the backordering cost. Our computational study shows that the heuristic performs well in the case where the ordering cost of the minor item is smaller than that of the major item. In the case where the ordering cost of the minor item is comparable with that of the major item, although the performance of the heuristic is not as good as that in the case of high major ordering cost, the difference is very small. In practice, the ordering cost of a minor item is often smaller than that of the major item. Thus, the proposed model and the heuristic will be applicable to real-world inventory systems. Our model holds a stringent assumption that the major item can be completely backordered, which may not be appropriate for the case of partial backordering. To make the model more practical, we need to relax this assumption and let the major item be partially backordered. Such relaxation will lead to a more intricate inventory model and some new algorithm has to be developed to obtain the optimal solution, which is the future work that we are planning to carry out.