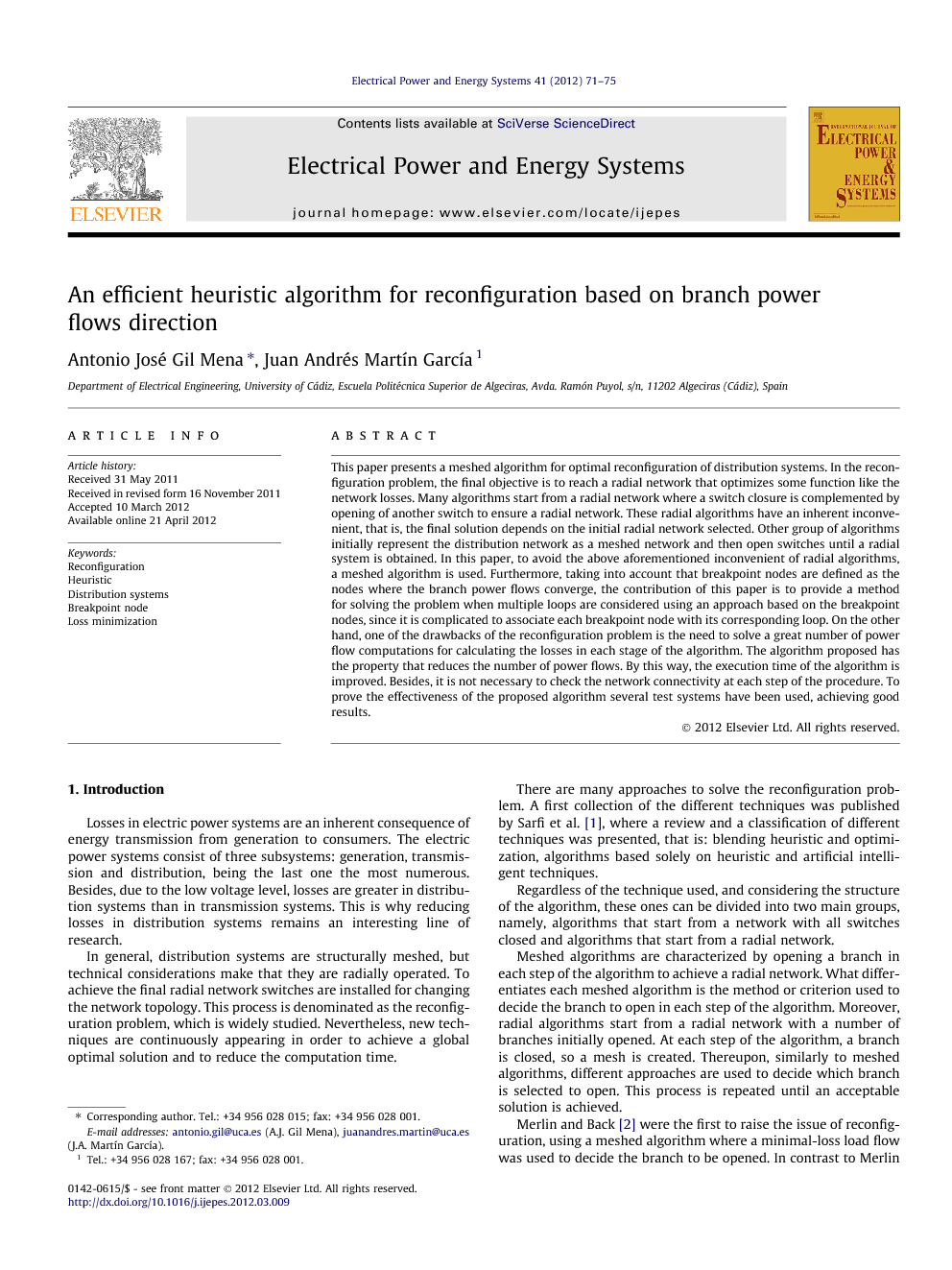 This paper presents a meshed algorithm for optimal reconfiguration of distribution systems. In the reconfiguration problem, the final objective is to reach a radial network that optimizes some function like the network losses. Many algorithms start from a radial network where a switch closure is complemented by opening of another switch to ensure a radial network. These radial algorithms have an inherent inconvenient, that is, the final solution depends on the initial radial network selected. Other group of algorithms initially represent the distribution network as a meshed network and then open switches until a radial system is obtained. In this paper, to avoid the above aforementioned inconvenient of radial algorithms, a meshed algorithm is used. Furthermore, taking into account that breakpoint nodes are defined as the nodes where the branch power flows converge, the contribution of this paper is to provide a method for solving the problem when multiple loops are considered using an approach based on the breakpoint nodes, since it is complicated to associate each breakpoint node with its corresponding loop. On the other hand, one of the drawbacks of the reconfiguration problem is the need to solve a great number of power flow computations for calculating the losses in each stage of the algorithm. The algorithm proposed has the property that reduces the number of power flows. By this way, the execution time of the algorithm is improved. Besides, it is not necessary to check the network connectivity at each step of the procedure. To prove the effectiveness of the proposed algorithm several test systems have been used, achieving good results.

Losses in electric power systems are an inherent consequence of energy transmission from generation to consumers. The electric power systems consist of three subsystems: generation, transmission and distribution, being the last one the most numerous. Besides, due to the low voltage level, losses are greater in distribution systems than in transmission systems. This is why reducing losses in distribution systems remains an interesting line of research. In general, distribution systems are structurally meshed, but technical considerations make that they are radially operated. To achieve the final radial network switches are installed for changing the network topology. This process is denominated as the reconfiguration problem, which is widely studied. Nevertheless, new techniques are continuously appearing in order to achieve a global optimal solution and to reduce the computation time. There are many approaches to solve the reconfiguration problem. A first collection of the different techniques was published by Sarfi et al. [1], where a review and a classification of different techniques was presented, that is: blending heuristic and optimization, algorithms based solely on heuristic and artificial intelligent techniques. Regardless of the technique used, and considering the structure of the algorithm, these ones can be divided into two main groups, namely, algorithms that start from a network with all switches closed and algorithms that start from a radial network. Meshed algorithms are characterized by opening a branch in each step of the algorithm to achieve a radial network. What differentiates each meshed algorithm is the method or criterion used to decide the branch to open in each step of the algorithm. Moreover, radial algorithms start from a radial network with a number of branches initially opened. At each step of the algorithm, a branch is closed, so a mesh is created. Thereupon, similarly to meshed algorithms, different approaches are used to decide which branch is selected to open. This process is repeated until an acceptable solution is achieved. Merlin and Back [2] were the first to raise the issue of reconfiguration, using a meshed algorithm where a minimal-loss load flow was used to decide the branch to be opened. In contrast to Merlin and Back, Civanlar et al. [3] were the first using a radial algorithm where a simple formula was used to evaluate the losses increase. Other papers using the same structures but with different approaches are continuously appearing. Among others, Refs. [4], [5], [6] and [7] make use of meshed algorithms and Refs. [8], [9] and [10] of radial algorithms. In Ref. [4], Viswanadha and Bijwe made use of real power loss sensitivity with respect to the impedances of the candidate branches to select the branch to be opened. Another meshed algorithm was used by Singh et al. in [5], where proposed opening of a branch in a loop carrying minimum resistive power flow. de Oliveira et al. [6] made use of a mixed integer non-linear programming approach, in which a continuous function is used to handle the discrete variables and Chandramohan et al. [7] use a non-dominated sorting genetic algorithm (NSGA) for reconfiguring to minimize its operating costs considering the system real power transmission loss and the cost of reactive power purchased by the distribution system. With respect to deal with the problem of reconfiguration through radial algorithms, in Ref. [8], Zhang et al. proposed a joint optimization algorithm of combining network reconfiguration and capacitor control. Bernardon et al. [9] proposed a new fuzzy multi-criteria decision making algorithm for the proper processing of the information sources available at the utilities in the context of distribution network reconfiguration. And recently, Ababei and Kavasseri [10] have proposed an efficient heuristic algorithm to solve the distribution network reconfiguration problem for loss reduction. Apart from these two large groups, a third group is formed by the union of a meshed and a radial algorithm, that is, a meshed algorithm is executed to give an initial solution for the radial algorithm. The paper proposed by Gomes et al. [11] belongs to this latter type. Finally, there are other algorithms that do not belong to the aforementioned groups like the heuristic constructive algorithm proposed in [12] by McDermott et al. Finally, Zhang et al. [13], have proposed a reliability-oriented reconfiguration (ROR) method that deals with uncertainties in loads, generations, electrical and economic parameters and ambiguous reliability parameters for distribution network reconfiguration. This work is an improvement of that published in [14] where a radial algorithm based on branch power flow directions was used. However, that approach did not consider the possibility that the algorithm started from a meshed network, where multiple loops were taken into account. The contribution of this paper is to provide a method for solving the problem when multiple loops are considered using the proposed approach. Overall, radial algorithms have the inconvenient that the final solution depends on the initial radial network selected. So, to avoid the above aforementioned inconvenient of radial algorithms, a meshed heuristic algorithm for optimal reconfiguration of distribution systems is now presented in this paper based on the direction of branch active and reactive power flows. Taking into account the above, a set of candidate branches to be opened are selected in each step of the algorithm in order to reach the radial network. To conclude, the paper is organized as follows: Section 2 covers the proposed heuristic technique and the study of the candidate branches to be selected. In Section 3, the algorithm is described. Test systems and numerical results are explained in Section 4 and finally, in Section 5 the final conclusions are presented.

In this paper an efficient meshed algorithm has been developed in order to solve the reconfiguration problem in distribution systems minimizing the network losses. A strategy has been designed to pair off active and reactive breakpoint nodes in a meshed network. Due to that strategy, it is not necessary to check the network connectivity at each step of the procedure, reducing therefore the computation time. Summarizing, the number of power flow calculations is approximately three times, especially for real networks where the P and Q-breakpoints tend to coincide. With relation to algorithm validation, three test systems from the technical literature have been used. The obtained results for these test systems have been equal or better than those published in the literature. Finally, using breakpoint nodes in a meshed algorithm has demonstrated its usefulness forfinding the solution of the reconfiguration problem.