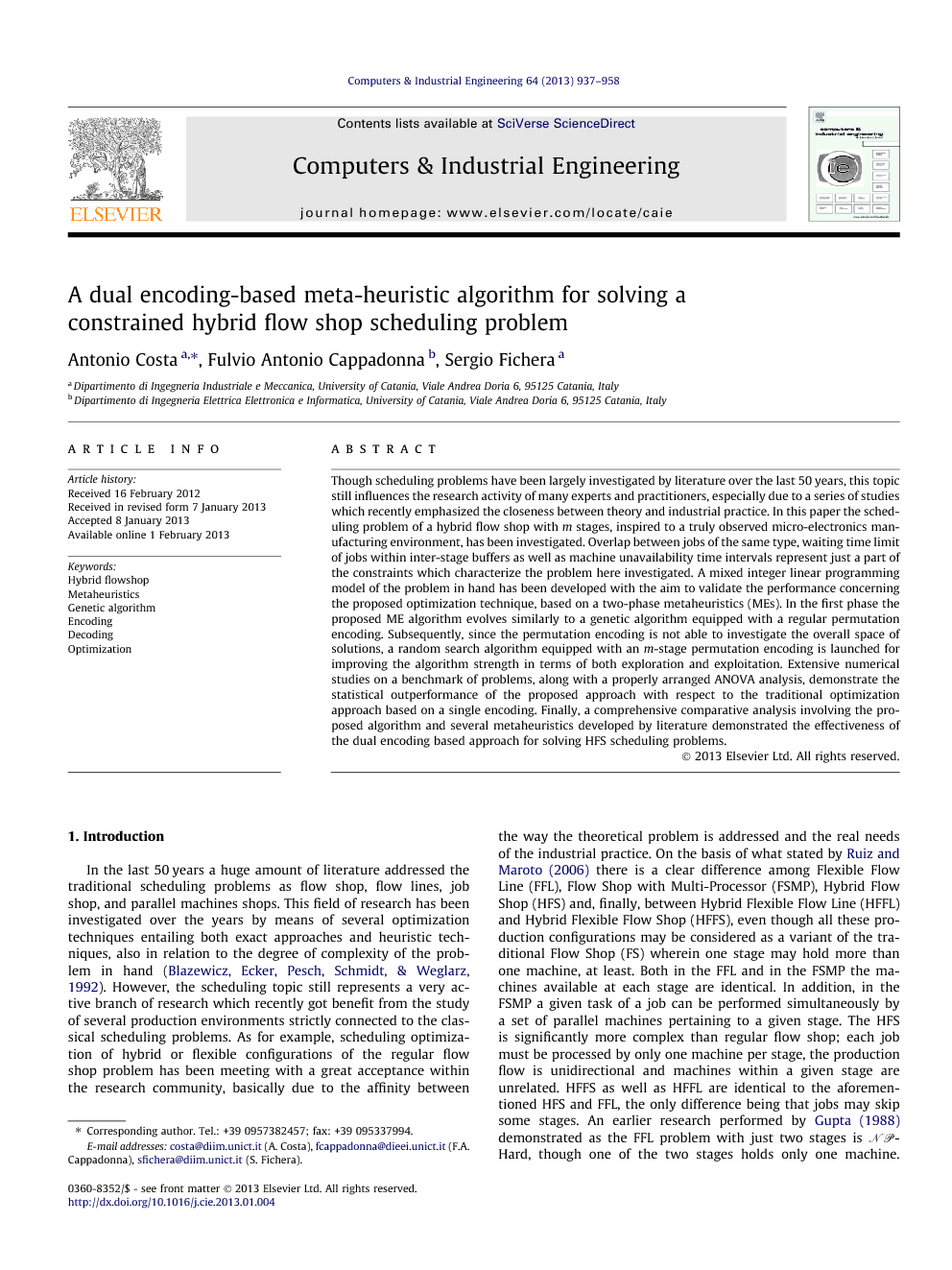 Though scheduling problems have been largely investigated by literature over the last 50 years, this topic still influences the research activity of many experts and practitioners, especially due to a series of studies which recently emphasized the closeness between theory and industrial practice. In this paper the scheduling problem of a hybrid flow shop with m stages, inspired to a truly observed micro-electronics manufacturing environment, has been investigated. Overlap between jobs of the same type, waiting time limit of jobs within inter-stage buffers as well as machine unavailability time intervals represent just a part of the constraints which characterize the problem here investigated. A mixed integer linear programming model of the problem in hand has been developed with the aim to validate the performance concerning the proposed optimization technique, based on a two-phase metaheuristics (MEs). In the first phase the proposed ME algorithm evolves similarly to a genetic algorithm equipped with a regular permutation encoding. Subsequently, since the permutation encoding is not able to investigate the overall space of solutions, a random search algorithm equipped with an m-stage permutation encoding is launched for improving the algorithm strength in terms of both exploration and exploitation. Extensive numerical studies on a benchmark of problems, along with a properly arranged ANOVA analysis, demonstrate the statistical outperformance of the proposed approach with respect to the traditional optimization approach based on a single encoding. Finally, a comprehensive comparative analysis involving the proposed algorithm and several metaheuristics developed by literature demonstrated the effectiveness of the dual encoding based approach for solving HFS scheduling problems.

In this paper a new approach for addressing constrained hybrid flow shop scheduling problems by metaheuristic algorithms has been presented. Differently from the rest of literature, the proposed technique combines two different problem encodings for improving both exploration and exploitation within the overall discrete space of solutions. In fact, the first phase of the proposed dual encoding metaheuristics called DEME uses a simple permutation encoding while, from a provided threshold on, an encoding switch is performed and a specific local search equipped with a multiple stage encoding is launched in order to investigate solutions that the previous encoding is not able to evaluate. Firstly, Dual encoding metaheuristic algorithms featured by different values of threshold have been compared with a regular genetic algorithm-based metaheuristics named SEGA equipped with a regular permutation encoding. An extensive experimental analysis has been carried out for demonstrating the effectiveness of the proposed optimization approach. For the smaller sized class of problems, both SEGA and DEMEs performance has been validated with respect to the global optima obtained by solving the related mixed integer linear programming problem. Subsequently, for large sized problem, a comparison between the different DEMEs and the SEGA confirmed as the dual encoding approach statistically outperforms the traditional single encoding-based one. In order to support what stated, a full factorial ANOVA analysis highlighted the influence of the threshold on the optimization performance of the proposed techniques in terms of makespan. Secondly, In order to emphasize the effectiveness of the proposed approach, an extensive comparison with several metaheuristics arisen from the relevant literature has been carried out. Numerical results put in evidence the outperformance of the DEMEs with respect to the rest of alternative metaheuristics. Future research should involve the application of a dual encoding strategy to further highly constrained scheduling problems as well as to the HFS scheduling problem with sequence dependent setup times.