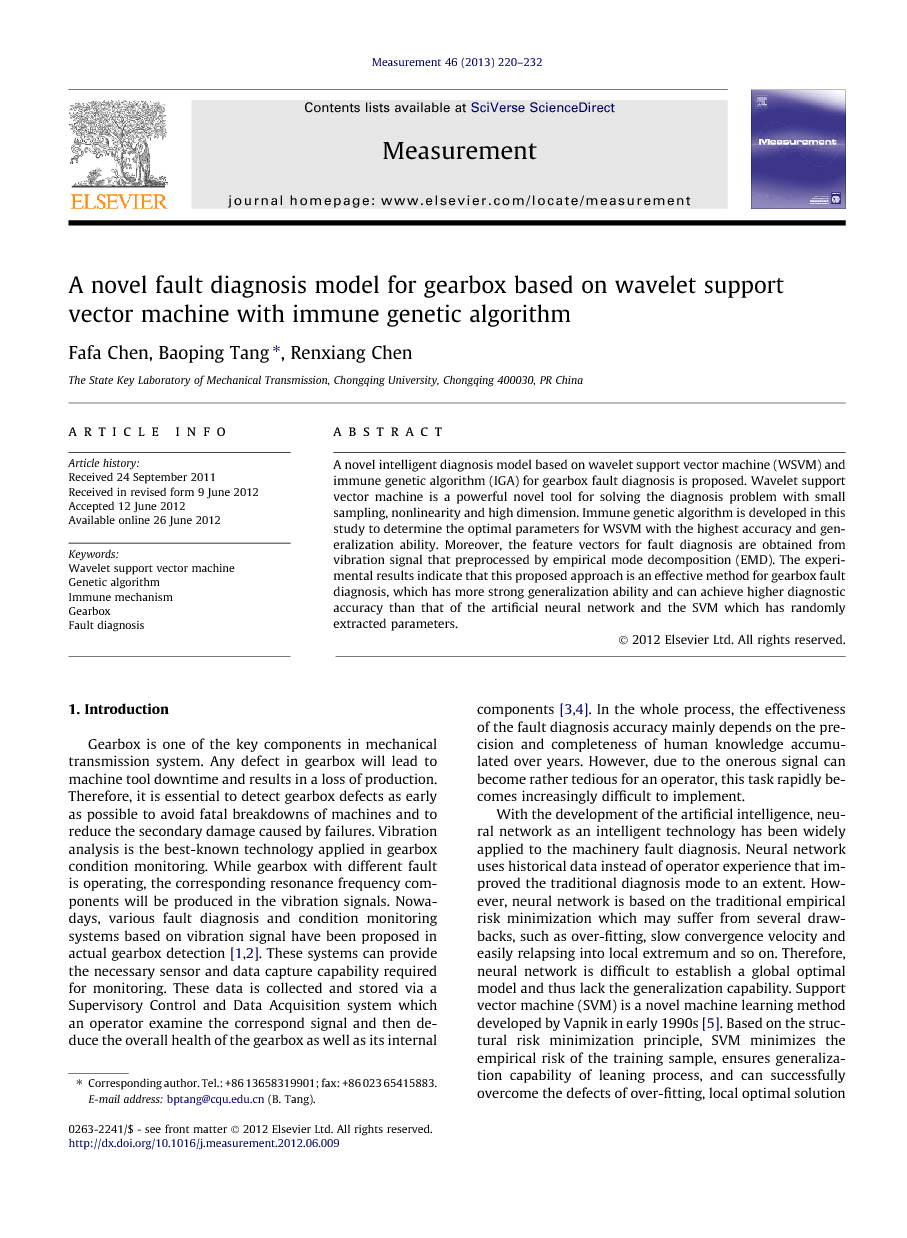 A novel intelligent diagnosis model based on wavelet support vector machine (WSVM) and immune genetic algorithm (IGA) for gearbox fault diagnosis is proposed. Wavelet support vector machine is a powerful novel tool for solving the diagnosis problem with small sampling, nonlinearity and high dimension. Immune genetic algorithm is developed in this study to determine the optimal parameters for WSVM with the highest accuracy and generalization ability. Moreover, the feature vectors for fault diagnosis are obtained from vibration signal that preprocessed by empirical mode decomposition (EMD). The experimental results indicate that this proposed approach is an effective method for gearbox fault diagnosis, which has more strong generalization ability and can achieve higher diagnostic accuracy than that of the artificial neural network and the SVM which has randomly extracted parameters.

Gearbox is one of the key components in mechanical transmission system. Any defect in gearbox will lead to machine tool downtime and results in a loss of production. Therefore, it is essential to detect gearbox defects as early as possible to avoid fatal breakdowns of machines and to reduce the secondary damage caused by failures. Vibration analysis is the best-known technology applied in gearbox condition monitoring. While gearbox with different fault is operating, the corresponding resonance frequency components will be produced in the vibration signals. Nowadays, various fault diagnosis and condition monitoring systems based on vibration signal have been proposed in actual gearbox detection [1] and [2]. These systems can provide the necessary sensor and data capture capability required for monitoring. These data is collected and stored via a Supervisory Control and Data Acquisition system which an operator examine the correspond signal and then deduce the overall health of the gearbox as well as its internal components [3] and [4]. In the whole process, the effectiveness of the fault diagnosis accuracy mainly depends on the precision and completeness of human knowledge accumulated over years. However, due to the onerous signal can become rather tedious for an operator, this task rapidly becomes increasingly difficult to implement. With the development of the artificial intelligence, neural network as an intelligent technology has been widely applied to the machinery fault diagnosis. Neural network uses historical data instead of operator experience that improved the traditional diagnosis mode to an extent. However, neural network is based on the traditional empirical risk minimization which may suffer from several drawbacks, such as over-fitting, slow convergence velocity and easily relapsing into local extremum and so on. Therefore, neural network is difficult to establish a global optimal model and thus lack the generalization capability. Support vector machine (SVM) is a novel machine learning method developed by Vapnik in early 1990s [5]. Based on the structural risk minimization principle, SVM minimizes the empirical risk of the training sample, ensures generalization capability of leaning process, and can successfully overcome the defects of over-fitting, local optimal solution and low-convergence rate existing in the neural network. In the support vector machine, the crucial operation is that a kernel function is used to map the input data into a higher dimensional feature space so that the classification problem becomes linearly separable. There are many kinds of existent support vector kernels such as the Gaussian kernel, the polynomial kernel, the exponential radial basis function kernel, wavelet kernel and so on. Since wavelet kernel can fitting arbitrary function within high-dimensional feature space, making the support vector machine to obtain the separating hyper-plane is more reasonable [6], [7] and [8]. Therefore, SVM combine with wavelet theory to construct a multi-dimensional wavelet kernel function, i.e. WSVM to identify the fault pattern of a gearbox is applied in this research. Nowadays, SVM has been successfully applied to numerous nonlinear classification and pattern recognition problems such as face detection [9], object detection and recognition [10], handwritten character and digit recognition [11], information and image recognition [12]. Since the essence of the fault diagnosis is also the pattern recognition, so it is reasonable to apply the SVM to gearbox fault diagnosis. However, in those applications, the performance of SVM is greatly dependent upon the selection of SVM parameters, but the appropriate SVM parameters is very difficult to select due to the lack of the corresponding theoretical basis. Recently, the most common optimization techniques for the selection of the SVM parameters is Grid algorithm, but the Grid algorithm (GA) is time consuming and does not perform very well [13]. Based on the Darwinian principle of ‘survival of the fittest’, the genetic algorithm is proposed by Holland and it has the capability to obtain the optimal parameter within a short time with some constrains [14]. As an intelligent optimization approach, the genetic algorithm is a general-purpose stochastic and parallel search method that has been successfully applied to many similarly complicated parameter search problems. However, as indicated by some researchers, in most GA applications, it is still a great challenge to keep the legality and diversity of antibodies in a population. The immune system is a basic biological defense system against bacteria, viruses and other disease-causing organisms [15]. According to the production of new antibodies and the communication of the individual in a population, the immune system has powerful capability in selection, learning and memory for elite individual [16]. Therefore it can keep the legality and diversity of chromosomes in a population. Based on the respective nature of genetic algorithms and immune systems, a novel optimization algorithm, i.e. immune genetic algorithm (IGA) is introduced in this research to optimize the parameters of the WSVM. IGA uses concentration regulation mechanism to maintain population diversity and vaccine mechanism to inhibit degeneracy during evolution. In addition, immune genetic, immune selection, and immune renewal are defined to meet large scale search for optimal solution. According to the above analysis, the proposed WSVM model is applied to fault diagnosis of a gearbox in this paper, in which IGA is used to optimize the parameters of the support vector machine. The remainder of this paper is organized as follows. Section 2 provides a brief introduction to the theory of SVM and describes how to construct wavelet kernel support vector machine. Section 3 introduces the basic idea of the recommended immune genetic algorithm and the optimization procedure to the WSVM parameters. Section 4 constructs a gearbox fault diagnosis model based on feature extraction with empirical mode decomposition. Section 5 testifies the performance of the proposed model with the experimental data sets and presents the numerical analysis procedure and the computational results for an experimental example. Finally, Section 6 provides the conclusion.

In this paper, WSVM optimized by immune genetic algorithm is applied to fault diagnosis of a gearbox. In this approach, EMD method is applied to extract features from vibration signal; immune genetic algorithm is used to select suitable parameters for WSVM classifier, which avoids over-fitting or under-fitting of the WSVM model occurring due to the improper determination of these parameters. The experimental data sets are used to evaluate its feasibility and performance in the fault diagnosis of a gearbox, and the results demonstrate that this method is effective in handle finite samples and the classification accuracies are superior to those of SVM classifiers whose parameters are randomly selected. Compared with other ordinary method, such as canonical WSVM model, canonical RBF-SVM model and RBF neural network, it is indicated that the proposed method has more excellent characters and better generalization performance. Moreover, the proposed method has strong robustness, which can effectively handle some types of unlabeled fault samples in practical application. In future research, the optimized WSVM will be made toward a higher efficient model beyond current levels, and efforts will be made toward multi-sensors information fusion fault diagnosis.