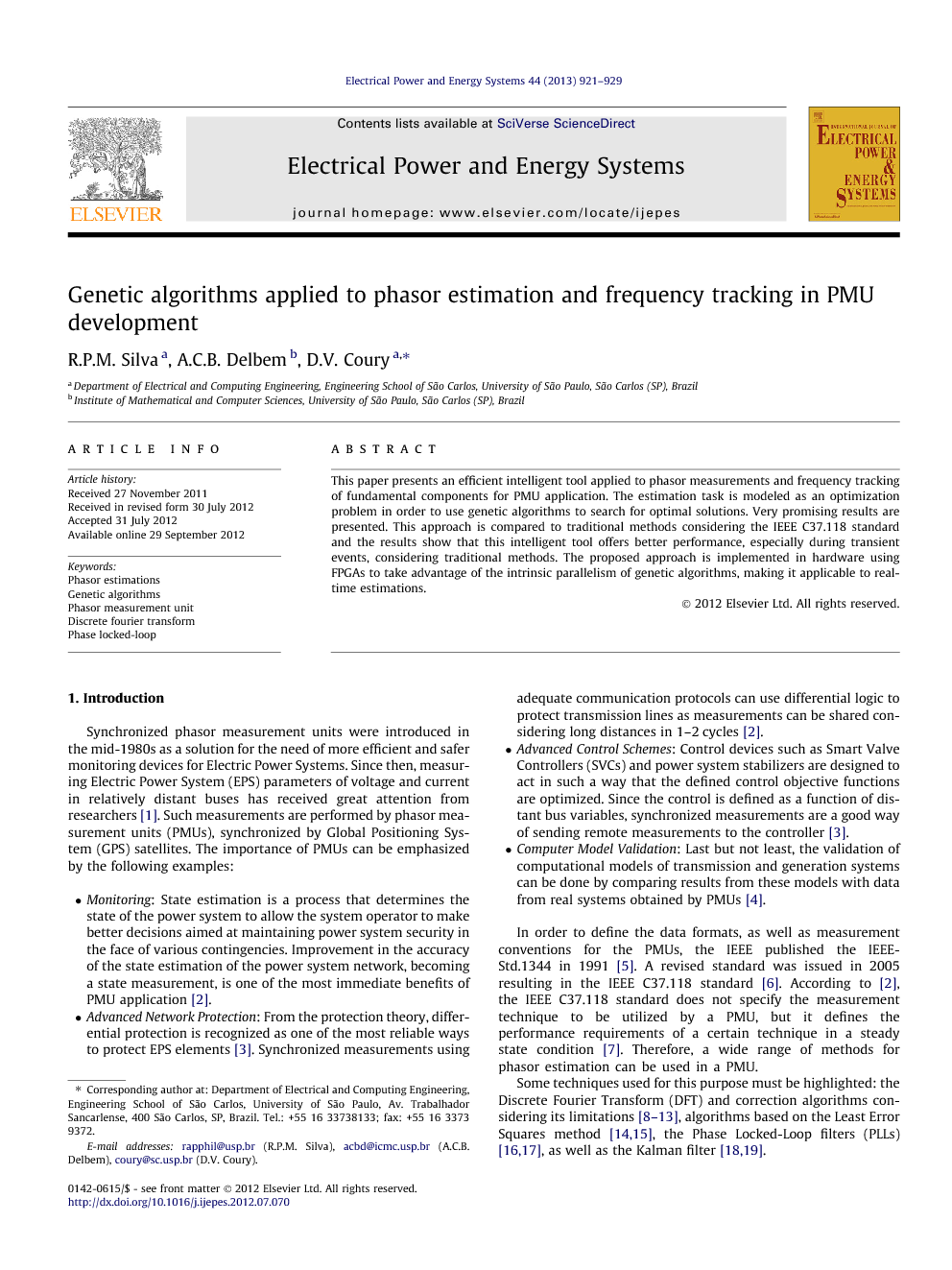 This paper presents an efficient intelligent tool applied to phasor measurements and frequency tracking of fundamental components for PMU application. The estimation task is modeled as an optimization problem in order to use genetic algorithms to search for optimal solutions. Very promising results are presented. This approach is compared to traditional methods considering the IEEE C37.118 standard and the results show that this intelligent tool offers better performance, especially during transient events, considering traditional methods. The proposed approach is implemented in hardware using FPGAs to take advantage of the intrinsic parallelism of genetic algorithms, making it applicable to real-time estimations

Synchronized phasor measurement units were introduced in the mid-1980s as a solution for the need of more efficient and safer monitoring devices for Electric Power Systems. Since then, measuring Electric Power System (EPS) parameters of voltage and current in relatively distant buses has received great attention from researchers [1]. Such measurements are performed by phasor measurement units (PMUs), synchronized by Global Positioning System (GPS) satellites. The importance of PMUs can be emphasized by the following examples: • Monitoring: State estimation is a process that determines the state of the power system to allow the system operator to make better decisions aimed at maintaining power system security in the face of various contingencies. Improvement in the accuracy of the state estimation of the power system network, becoming a state measurement, is one of the most immediate benefits of PMU application [2]. • Advanced Network Protection: From the protection theory, differential protection is recognized as one of the most reliable ways to protect EPS elements [3]. Synchronized measurements using adequate communication protocols can use differential logic to protect transmission lines as measurements can be shared considering long distances in 1–2 cycles [2]. • Advanced Control Schemes: Control devices such as Smart Valve Controllers (SVCs) and power system stabilizers are designed to act in such a way that the defined control objective functions are optimized. Since the control is defined as a function of distant bus variables, synchronized measurements are a good way of sending remote measurements to the controller [3]. • Computer Model Validation: Last but not least, the validation of computational models of transmission and generation systems can be done by comparing results from these models with data from real systems obtained by PMUs [4]. In order to define the data formats, as well as measurement conventions for the PMUs, the IEEE published the IEEE-Std.1344 in 1991 [5]. A revised standard was issued in 2005 resulting in the IEEE C37.118 standard [6]. According to [2], the IEEE C37.118 standard does not specify the measurement technique to be utilized by a PMU, but it defines the performance requirements of a certain technique in a steady state condition [7]. Therefore, a wide range of methods for phasor estimation can be used in a PMU. Some techniques used for this purpose must be highlighted: the Discrete Fourier Transform (DFT) and correction algorithms considering its limitations [8], [9], [10], [11], [12] and [13], algorithms based on the Least Error Squares method [14] and [15], the Phase Locked-Loop filters (PLLs) [16] and [17], as well as the Kalman filter [18] and [19]. According to [7], most algorithms used in commercial PMUs are based on the DFT. One of the first experiments involving synchronized measurements used the DFT filter to perform phasor calculations [20]. Concerning the DFT application, the weakness of the filters lies in the error caused when a frequency deviation exists. Phadke et al. [10] present a correction algorithm or the DFT filter results and frequency tracking based on the phase error caused by frequency deviations. Benmouyal [12] proposes an approach based on the DFT where the sampling rate is adjusted according to the frequency deviation, enabling synchronous sampling. Begovic et al. [13] present a method based on polynomial fitting of the DFT. Hart et al. [11] proposes the implementation of frequency tracking and phasor estimation for a generator relay using the adjustment of the size of the data window according to the frequency estimation. Refs. [9] and [8] also modify the DFT results. Instead of considering the partial error of the phase resultant from the DFT, this estimation process is based on the total error and consequently improves the performance of the algorithm. Another method that should be highlighted due to its simplicity is based on PLL systems. A set of non-linear differential equations governs the dynamics of the algorithm. The algorithm estimates the phasor and frequency parameters by a set of recursive equations obtained by applying the gradient descent method to the set of differential equations and they are discretized by first-order approximations for derivatives [16]. Ziarani and Konrad [17] improved this method, gaining speed of convergence. As an alternative for traditional methods, techniques such as Genetic Algorithms (GAs) have been used over the last years. The continuous development of hardware have enabled real-time implementation of complex methods for a variety of applications. El-Naggar and Youssef [21] presents a pioneer publication using GAs in estimation problems for frequency relays. Pursuing real-time applications, an optimized GA was presented in [22] and [23]. Ref. [24] presents experimental results of a GA estimating frequency effectively executed in FPGAs in real-time. This work presents an application of GAs as an alternative method to phasor estimation and frequency tracking in an electric power system. Some inherent characteristics of the GAs are explored in order to obtain a robust method when compared to traditional ones. The proposed approach leads to a more robust estimation, especially when the system is facing transient events. A good performance of the proposed algorithm is assured with the aid of computer simulations and a laboratory set-up in order to demonstrate its functionality is presented. The results are compared to two traditional techniques: Discrete Fourier Transform and Phase Locked-Loop with very promising results. Fig. 1 shows a flowchart concerning the new methodology, as well as the flowchart for the implementation of the modified DFT algorithm [8] and [9] considered as the traditional method normally used in PMU implementations. The Phase Locked-Loop algorithm was also implemented using Ref. [17]. This work is organized as follows: the GA fundamentals are described in Section 2, where the application of GA for phasor measurement is also discussed. Section 3 presents the accuracy metric and experimental results concerning the implemented methods, as well as the implementation of GA in FPGA. Finally, Section 4 presents the conclusions concerning the new technique proposed.

This work presented a methodology based on GAs applied to real-time phasor estimation and frequency tracking. The precision and response time of the GAs were evaluated using synthetic data generated according to the proposed benchmark tests described in the IEEE C37.118 standard. In order to compare the performance with traditional methods, DFT and PLL based methods were implemented. Results showed that GAs have the fastest response time when compared to other implemented methods. In addition, a GA was implemented in FPGA in order to take advantage of the intrinsic parallelism of this kind of algorithm, enabling the real-time processing of the signal. An EPS was simulated in the ATP software to provide data very close to real situations. The results were compared to a frequency reference provided by the ATP software. They show that GAs have a good precision concerning the estimations provided with the fastest response time when compared to the conventional algorithms for the same purpose. It is well known that the DFT is a widely used method with vast application in PMU equipment. This paper offers an alternative method that is faster facing transient events, it is immune against small frequency variations and responds well in the presence of noise. The paper also demonstrates that although GAs demand a bigger computational burden if compared to the other methods and involves a convergence process, they can be designed and implemented in an adequate FPGA hardware prototype for PMUs considering real-time measurement purposes.