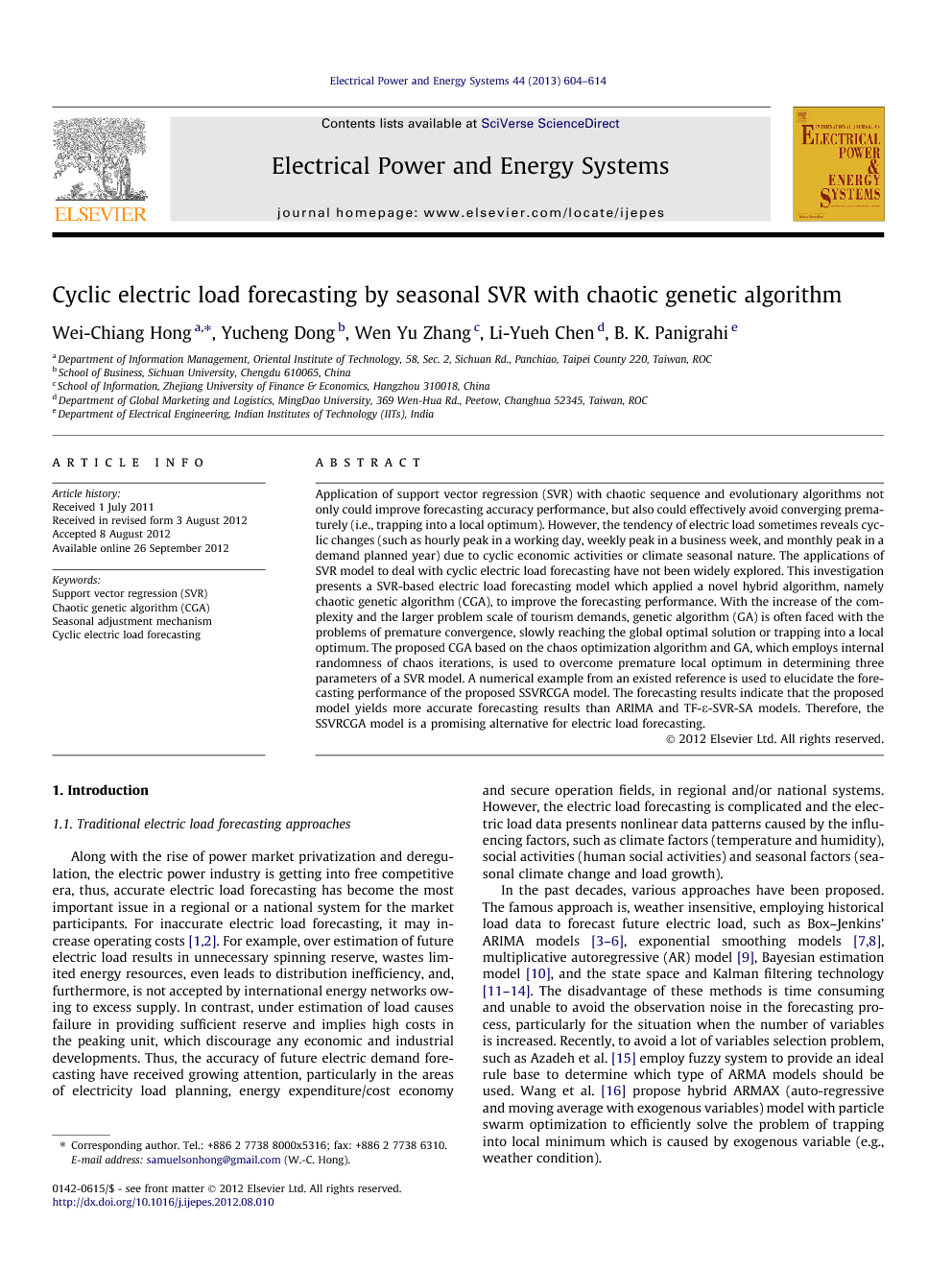 Application of support vector regression (SVR) with chaotic sequence and evolutionary algorithms not only could improve forecasting accuracy performance, but also could effectively avoid converging prematurely (i.e., trapping into a local optimum). However, the tendency of electric load sometimes reveals cyclic changes (such as hourly peak in a working day, weekly peak in a business week, and monthly peak in a demand planned year) due to cyclic economic activities or climate seasonal nature. The applications of SVR model to deal with cyclic electric load forecasting have not been widely explored. This investigation presents a SVR-based electric load forecasting model which applied a novel hybrid algorithm, namely chaotic genetic algorithm (CGA), to improve the forecasting performance. With the increase of the complexity and the larger problem scale of tourism demands, genetic algorithm (GA) is often faced with the problems of premature convergence, slowly reaching the global optimal solution or trapping into a local optimum. The proposed CGA based on the chaos optimization algorithm and GA, which employs internal randomness of chaos iterations, is used to overcome premature local optimum in determining three parameters of a SVR model. A numerical example from an existed reference is used to elucidate the forecasting performance of the proposed SSVRCGA model. The forecasting results indicate that the proposed model yields more accurate forecasting results than ARIMA and TF-ε-SVR-SA models. Therefore, the SSVRCGA model is a promising alternative for electric load forecasting.

Along with the rise of power market privatization and deregulation, the electric power industry is getting into free competitive era, thus, accurate electric load forecasting has become the most important issue in a regional or a national system for the market participants. For inaccurate electric load forecasting, it may increase operating costs [1] and [2]. For example, over estimation of future electric load results in unnecessary spinning reserve, wastes limited energy resources, even leads to distribution inefficiency, and, furthermore, is not accepted by international energy networks owing to excess supply. In contrast, under estimation of load causes failure in providing sufficient reserve and implies high costs in the peaking unit, which discourage any economic and industrial developments. Thus, the accuracy of future electric demand forecasting have received growing attention, particularly in the areas of electricity load planning, energy expenditure/cost economy and secure operation fields, in regional and/or national systems. However, the electric load forecasting is complicated and the electric load data presents nonlinear data patterns caused by the influencing factors, such as climate factors (temperature and humidity), social activities (human social activities) and seasonal factors (seasonal climate change and load growth). In the past decades, various approaches have been proposed. The famous approach is, weather insensitive, employing historical load data to forecast future electric load, such as Box–Jenkins’ ARIMA models [3], [4], [5] and [6], exponential smoothing models [7] and [8], multiplicative autoregressive (AR) model [9], Bayesian estimation model [10], and the state space and Kalman filtering technology [11], [12], [13] and [14]. The disadvantage of these methods is time consuming and unable to avoid the observation noise in the forecasting process, particularly for the situation when the number of variables is increased. Recently, to avoid a lot of variables selection problem, such as Azadeh et al. [15] employ fuzzy system to provide an ideal rule base to determine which type of ARMA models should be used. Wang et al. [16] propose hybrid ARMAX (auto-regressive and moving average with exogenous variables) model with particle swarm optimization to efficiently solve the problem of trapping into local minimum which is caused by exogenous variable (e.g., weather condition). The second approach is regression model, which is based on the cause–effect relationships between electric load and relevant independent variables (weather, holiday, temperature, wind conditions, humidity, and so on), such as linear regression, lots of explanatory variables, such as “weather” (relative humidity, heating, and cooling degree-days), “holiday”, “temperature”, and “economic and geographic” (GDP, electricity price, and population), are considered into the regression model [17], [18], [19], [20] and [21]. These forecasting approaches are difficult to take some significant improvement in terms of forecasting accuracy due to their theoretical limitations, such as unable to capture the rapid variational process changes underlying of electric load from historical data pattern. In addition, these models are based on linear assumption, however, these independent variables are unjustified to be used because of the terms are known to be nonlinear. Recently, Vilar et al. [22] introduce a nonparametric regression techniques with functional explanatory data and a semi-functional partial linear model to forecast 1-day electricity demand, by cutting the observed time series into a sample of functional trajectories and considering the past functional observation (last day trajectory) rather than multiple past time series values to incorporate vector covariates in the forecasting procedure. To improve the performance of nonlinear electric load forecasting, artificial intelligence techniques are employed. Knowledge based expert system (KBES) approach [23] extracts rules from received relevant information (e.g., daily temperature, day type, load from the previous day, and so on), then, derives training rules and transforms the information into mathematical equations. This approach has the rule-based mechanism to transform new rule from received information, i.e., the expert capability is trained and increased by the existence presuming to increase forecasting accuracy [23], [24] and [25]. This approach is derivation of the rules from on-the-job training and sometimes transforming the information logic to equations could be impractical. Recently, applications of fuzzy inference system and fuzzy theory in load forecasting to improve the shortcomings of KBES are also received attentions. Ying and Pan [26] introduce adaptive network fuzzy inference system (ANFIS), by looking for the mapping relation between the input and output data to determine the optimal distribution of membership functions, to forecast regional load. Chen and Wang [27] and Chang et al. [28] all employ fuzzy approaches to get superior performance in terms of load forecasting. Accompanying the mature nonlinear mapping capabilities and data processing characteristics, artificial neural network (ANN) has received wide successful applications in improving load forecasting accuracy [14], [29], [30], [31] and [32]. These experimental results indicate that the ANN model is superior to ARIMA and regression models in terms of forecasting accuracy. ANN-based models seem to obtain improved and acceptable performance in load forecasting issue and to provide the possible nonlinear extensions to the ARIMA models in load time series. However, the training procedure of ANNs models is not only time consuming but also possible to get trapped in local minima and subjectively in selecting the model architecture [33]. Recently, to improve the drawbacks of ANN, many applications of hybrid ANN with statistical methods or other intelligent approaches have received a lot of attentions, such as hybrid with Bayesian inference [34] and [35], self-organizing map [36] and [37], wavelet transform [38] and [39], particle swarm optimization [40], and cooperative co-evolutionary approach [41].

For a developing country, like China, or an energy-limited economy, like Taiwan, accurate electric load forecasting is a quite important guide for effective implementations/actions of energy policies. The policy makers desire to look for founded forecasts to satisfy different load demand type (cyclic type versus regular type). However, it is particularly true that highly technological changes and uncertainties of energy market make electric load forecasting difficult. Thus, it is worth analyzing where these forecasts fail and how forecasting accuracy can be improved. From the historical data, the Northern China electric load values show not only a strong growth trend but also an obvious monthly cyclic tendency. In this paper, we hybridize several novel forecasting techniques, seasonal adjustment, chaotic sequence and genetic algorithm, namely SSVRCGA model, to examine its potentiality in forecasting monthly electric loads. Three other alternative models, ARIMA, TF-ε-SVR-SA, and SVRCGA models are used to compare the forecasting performance. Experiment results indicate that the proposed SSVRCGA model has significant superiority among other alternatives in terms of forecasting accuracy. Meanwhile, this research also indicates the hybrid of seasonal adjustment and chaotic sequence is useful to improve the forecasting accuracy. This investigation attempts to integrate chaotic adjustment and the searching capability of GA into a SVR model to forecast electric load. The favorable results obtained in this investigation demonstrate that the proposed model is valid for application in electric load demand analysis fields. In the future, the parameters of CGA listed in Table 3 (such as probability of crossover, pc, the annealing operation parameter, δ, and the probability of mutation, pm) should be further determined by other evolutionary algorithms to obtain more suitable parameter combination, and possibly more accurate forecasting of electric load. Furthermore, other advanced optimization algorithms for parameters selection and other hybrid mechanism still have their potentials to be employed for a SVR-base load forecasting model to satisfy the requirement of accurate electric load forecasting.