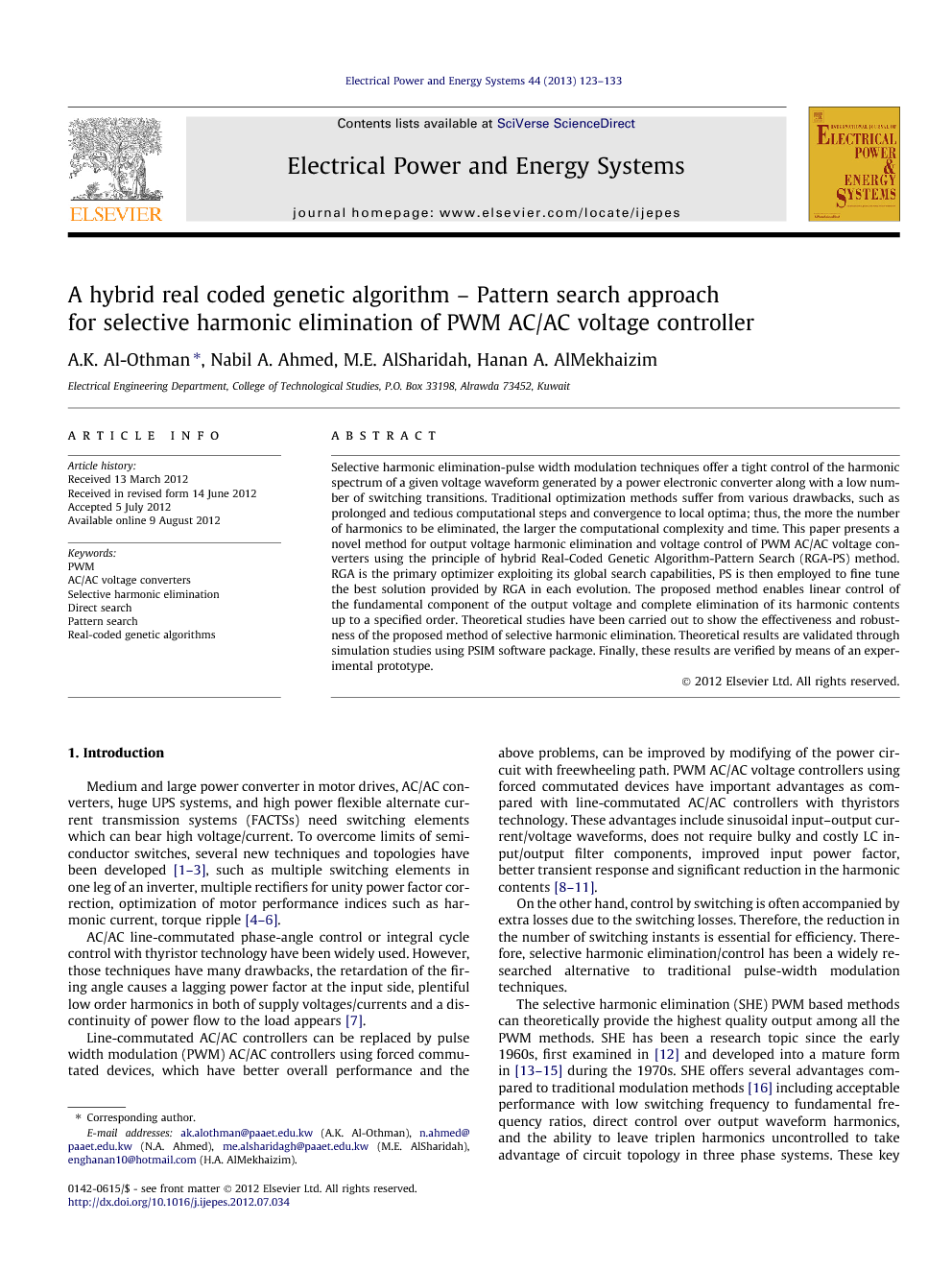 Selective harmonic elimination-pulse width modulation techniques offer a tight control of the harmonic spectrum of a given voltage waveform generated by a power electronic converter along with a low number of switching transitions. Traditional optimization methods suffer from various drawbacks, such as prolonged and tedious computational steps and convergence to local optima; thus, the more the number of harmonics to be eliminated, the larger the computational complexity and time. This paper presents a novel method for output voltage harmonic elimination and voltage control of PWM AC/AC voltage converters using the principle of hybrid Real-Coded Genetic Algorithm-Pattern Search (RGA-PS) method. RGA is the primary optimizer exploiting its global search capabilities, PS is then employed to fine tune the best solution provided by RGA in each evolution. The proposed method enables linear control of the fundamental component of the output voltage and complete elimination of its harmonic contents up to a specified order. Theoretical studies have been carried out to show the effectiveness and robustness of the proposed method of selective harmonic elimination. Theoretical results are validated through simulation studies using PSIM software package. Finally, these results are verified by means of an experimental prototype.

Medium and large power converter in motor drives, AC/AC converters, huge UPS systems, and high power flexible alternate current transmission systems (FACTSs) need switching elements which can bear high voltage/current. To overcome limits of semiconductor switches, several new techniques and topologies have been developed [1], [2] and [3], such as multiple switching elements in one leg of an inverter, multiple rectifiers for unity power factor correction, optimization of motor performance indices such as harmonic current, torque ripple [4], [5] and [6]. AC/AC line-commutated phase-angle control or integral cycle control with thyristor technology have been widely used. However, those techniques have many drawbacks, the retardation of the firing angle causes a lagging power factor at the input side, plentiful low order harmonics in both of supply voltages/currents and a discontinuity of power flow to the load appears [7]. Line-commutated AC/AC controllers can be replaced by pulse width modulation (PWM) AC/AC controllers using forced commutated devices, which have better overall performance and the above problems, can be improved by modifying of the power circuit with freewheeling path. PWM AC/AC voltage controllers using forced commutated devices have important advantages as compared with line-commutated AC/AC controllers with thyristors technology. These advantages include sinusoidal input–output current/voltage waveforms, does not require bulky and costly LC input/output filter components, improved input power factor, better transient response and significant reduction in the harmonic contents [8], [9], [10] and [11]. On the other hand, control by switching is often accompanied by extra losses due to the switching losses. Therefore, the reduction in the number of switching instants is essential for efficiency. Therefore, selective harmonic elimination/control has been a widely researched alternative to traditional pulse-width modulation techniques. The selective harmonic elimination (SHE) PWM based methods can theoretically provide the highest quality output among all the PWM methods. SHE has been a research topic since the early 1960s, first examined in [12] and developed into a mature form in [13], [14] and [15] during the 1970s. SHE offers several advantages compared to traditional modulation methods [16] including acceptable performance with low switching frequency to fundamental frequency ratios, direct control over output waveform harmonics, and the ability to leave triplen harmonics uncontrolled to take advantage of circuit topology in three phase systems. These key advantages make SHE a viable alternative to other methods of modulation in applications such as variable speed drives [17], [18], [19], [20] and [21], or dual-frequency induction heating [22]. This method is sometimes called a programmed PWM technique. However, the drawback of these methods is a heavy computational burden and a complicated hardware [15]. The main challenge of solving the associated nonlinear equations, which are transcendental in nature and therefore have multiple solutions, is the convergence. In this paper, a SHE-PWM model of an AC/AC voltage converters is developed that can be used for arbitrary number of switching angles. The paper proposes an efficient optimization technique called the hybrid Genetic Algorithm-Pattern Search (RGA-PS) method that reduces significantly the computational burden resulting in fast convergence. The feasibility and effectiveness of the proposed algorithm is evaluated with intensive simulation studies Simulation results for a 3 and 5 switching instants single-phase AC/AC voltage converters are presented. The paper is organized in the following manner. The basic principle of operation and problem formulation is presented in Section 2. Section 3 introduces an over view of GA and GA-PS algorithm. Description of numerical and simulation results of the SHE-PWM AC/AC voltage converters is introduced in Section 4. Section 5 presents experimental verification of the proposed selective harmonic elimination technique. Conclusions are given in Section5.

Selective harmonic elimination/control has been a widely researched alternative to traditional pulse-width modulation techniques. In this paper, a new selective harmonic elimination/control based on hybrid Genetic Algorithm-Pattern Search method is proposed for PWM AC/AC voltage controllers with forced commutations. The theoretical PWM pattern is found by solving the nonlinear harmonic equations which describe the suggested PWM method. The new pattern proposed in this paper has the features of complete harmonic elimination up to the specified order as well as linear voltage control and requires a low order pulse number. With the proposed hybrid RGA-PS method, complete elimination of desired harmonics is attainable in a relatively fast CPU, while with RGA method, complete elimination of desired harmonics is not possible; rather this method minimizes all desired harmonics. The feasibility and effectiveness of the proposed algorithm is evaluated with intensive simulation and experimental studies.