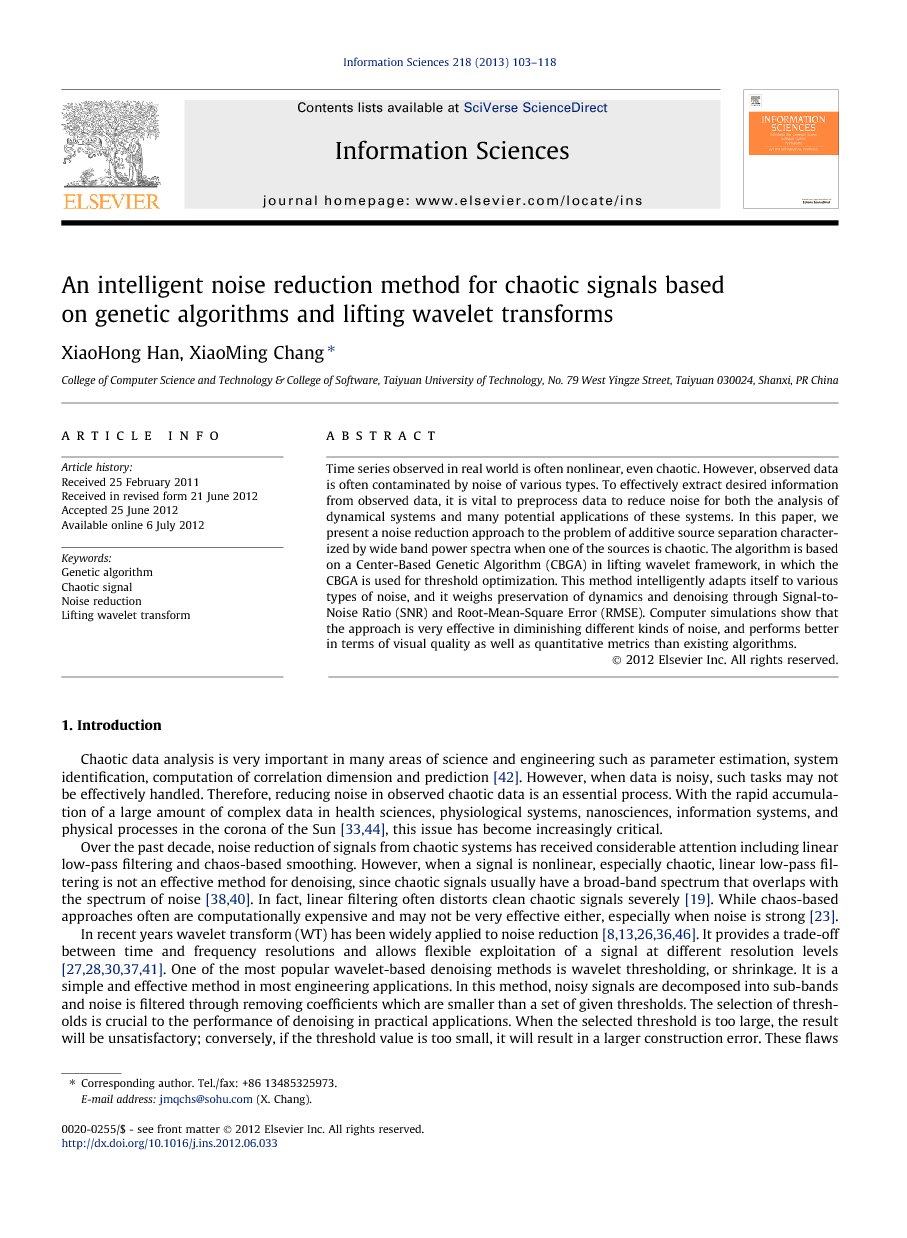 Time series observed in real world is often nonlinear, even chaotic. However, observed data is often contaminated by noise of various types. To effectively extract desired information from observed data, it is vital to preprocess data to reduce noise for both the analysis of dynamical systems and many potential applications of these systems. In this paper, we present a noise reduction approach to the problem of additive source separation characterized by wide band power spectra when one of the sources is chaotic. The algorithm is based on a Center-Based Genetic Algorithm (CBGA) in lifting wavelet framework, in which the CBGA is used for threshold optimization. This method intelligently adapts itself to various types of noise, and it weighs preservation of dynamics and denoising through Signal-to-Noise Ratio (SNR) and Root-Mean-Square Error (RMSE). Computer simulations show that the approach is very effective in diminishing different kinds of noise, and performs better in terms of visual quality as well as quantitative metrics than existing algorithms.

Chaotic data analysis is very important in many areas of science and engineering such as parameter estimation, system identification, computation of correlation dimension and prediction [42]. However, when data is noisy, such tasks may not be effectively handled. Therefore, reducing noise in observed chaotic data is an essential process. With the rapid accumulation of a large amount of complex data in health sciences, physiological systems, nanosciences, information systems, and physical processes in the corona of the Sun [33] and [44], this issue has become increasingly critical. Over the past decade, noise reduction of signals from chaotic systems has received considerable attention including linear low-pass filtering and chaos-based smoothing. However, when a signal is nonlinear, especially chaotic, linear low-pass filtering is not an effective method for denoising, since chaotic signals usually have a broad-band spectrum that overlaps with the spectrum of noise [38] and [40]. In fact, linear filtering often distorts clean chaotic signals severely [19]. While chaos-based approaches often are computationally expensive and may not be very effective either, especially when noise is strong [23]. In recent years wavelet transform (WT) has been widely applied to noise reduction [8], [13], [26], [36] and [46]. It provides a trade-off between time and frequency resolutions and allows flexible exploitation of a signal at different resolution levels [27], [28], [30], [37] and [41]. One of the most popular wavelet-based denoising methods is wavelet thresholding, or shrinkage. It is a simple and effective method in most engineering applications. In this method, noisy signals are decomposed into sub-bands and noise is filtered through removing coefficients which are smaller than a set of given thresholds. The selection of thresholds is crucial to the performance of denoising in practical applications. When the selected threshold is too large, the result will be unsatisfactory; conversely, if the threshold value is too small, it will result in a larger construction error. These flaws decrease its performance in practical applications. To overcome these shortcomings, there have been tremendous efforts to contribute to the adaptive ability of threshold selection [1], [4], [5] and [24]. Chang et al. [4] proposed an adaptive data-driven threshold via wavelet soft thresholding, which is adaptive to each sub-band due to depending on data-driven parameter estimation. Liu and Liao [24] presented an adaptive threshold based on a gradient descent algorithm for chaotic signals. This method adjusts the parameters of sigmoid threshold filtering using the gradient descent algorithm for the adaptive choice of wavelet coefficients. More similar wavelet-based noise reduction methods have been proposed in [1] and [5]. However, through careful analysis we can find that the above mentioned propositions only consider the impact of additive white noise [3]1 on the chaotic signals. Unfortunately, in the context of practical applications, chaotic signals are often corrupted by different types of noise, such as white noise and colored noise [32].2 Therefore, an ideal method should do the denoising by intelligently learning the noise type from signals themselves without any prior knowledge about the kind of noise. In light of these considerations, we present an innovative approach for denoising in the context of different types of noise, in which an optimal threshold is selected for each sub-band at different scales through a Center-Based Genetic Algorithm (CBGA) [2], [10], [18], [39] and [48]. This new method utilizes second-generation wavelets. Compared with the classical wavelets, the second-generation wavelets allow a faster implementation of wavelet transforms and provide a great deal of flexibility in the construction of biorthogonal wavelets [34] and [35]. After describing the method, we demonstrate its use on two familiar chaotic systems in three dimensions: first, an example of the noisy chaotic signals generated by a Lorenz system [22] and then the noisy chaotic signals generated by a Rossler system [7]. To compare the denoising performance between our approach and other wavelet-based methods, we also perform the soft threshold wavelet method [13] and the adaptive dual lifting wavelet method [24] on the same noisy chaotic signals. The remainder of this paper is organized as follows. In Section 2, we provide the formulation of the optimization problem. Section 3 describes our CBGA-based threshold selection and the proposed denoising method. In Sections 4 and 5, we compare the effectiveness between our algorithm and other approaches in reducing noise on the chaotic Lorenz data and Rossler data. Finally, we provide a few concluding remarks in Section 6.

In this paper, we propose a new denoising method based on a Center-Based Genetic Algorithm (CBGA) for chaotic signals, where the CBGA is used to obtain the optimal threshold in lifting wavelet framework. The distinctions between the CBGA-based method and two other methods are investigated from the following perspectives. (1) For noisy chaotic signals generated by Lorenz and Rossler systems, our method has more improvement than the soft threshold method and the adaptive method in removing noise while preserving the dynamics of signals. (2) The proposed method can suppress both Gaussian white noise and Gaussian colored noise in chaotic signals; however, the soft threshold method and the adaptive noise reduction method can only suppress Gaussian white noise while producing a degree of distortion. (3) The proposed method can adaptively obtain the optimal threshold value through the CBGA; however, the soft threshold method and the adaptive method have to determine the threshold value through a shrinkage function or hand tuning of the parameters. Yet there are essential issues regarding the proposed method. In our method, there are some additional parameters need to set in the CBGA apart from the parameters of classical GA. So, the computational complexity is higher than that of classical GA in the selection of optimal threshold. In general, the time complexity is evaluated by counting the number of arithmetic operations required for wavelet transformation and genetic optimization of thresholds. For the purpose of comparison, we compute the overall computational time taken by the above three methods. The time of these three methods is plotted in Fig. 12 for signals of size 128, 256 and 512. From Fig. 12, we can see the computation time is influenced by signal size and increases significantly with signal size. The time of the soft threshold only includes wavelet transformation while both the adaptive method and the CBGA-based method have to spend time on learning the noise parameters. Therefore, the overall computational complexity of both the adaptive method and the CBGA-based method is higher than the soft threshold method for the same signal. Hence, in future studies, the computational expense of the proposed method will be addressed with the development of parallel processing algorithms. In addition, we will develop adaptive algorithms where the parameters are controlled adaptively to alleviate the parameter setting