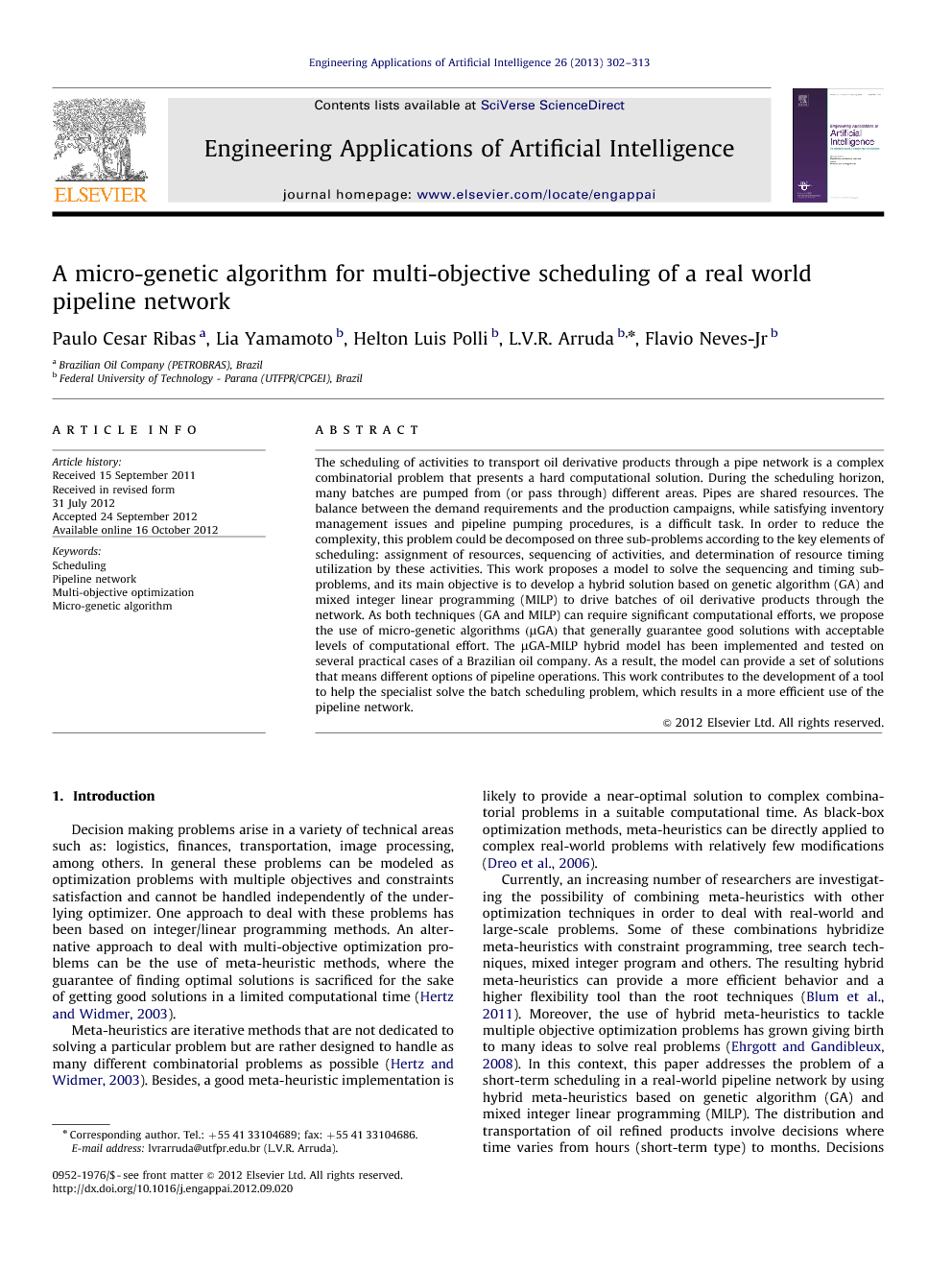 The scheduling of activities to transport oil derivative products through a pipe network is a complex combinatorial problem that presents a hard computational solution. During the scheduling horizon, many batches are pumped from (or pass through) different areas. Pipes are shared resources. The balance between the demand requirements and the production campaigns, while satisfying inventory management issues and pipeline pumping procedures, is a difficult task. In order to reduce the complexity, this problem could be decomposed on three sub-problems according to the key elements of scheduling: assignment of resources, sequencing of activities, and determination of resource timing utilization by these activities. This work proposes a model to solve the sequencing and timing sub-problems, and its main objective is to develop a hybrid solution based on genetic algorithm (GA) and mixed integer linear programming (MILP) to drive batches of oil derivative products through the network. As both techniques (GA and MILP) can require significant computational efforts, we propose the use of micro-genetic algorithms (μGA)(μGA) that generally guarantee good solutions with acceptable levels of computational effort. The μGA-MILPμGA-MILP hybrid model has been implemented and tested on several practical cases of a Brazilian oil company. As a result, the model can provide a set of solutions that means different options of pipeline operations. This work contributes to the development of a tool to help the specialist solve the batch scheduling problem, which results in a more efficient use of the pipeline network.

We have developed a μGA-MILPμGA-MILP hybrid model for sequencing batches in a pipeline network scheduling problem. The proposed approach has been tested with real-world scenarios from Brazilian Oil Company. The case studies cover time horizons over a period of a month and involve scenarios with 48 batches, as well as complex scenarios containing 367 batches. The several criteria (objective functions) used to put the batches in order take operational characteristics of the network into account, such as inventory constraints and production/demand profiles (associated to time windows), presence of interface among products, and others. Since the ordered sequence of pumped products has an important impact over the final short-term scheduling, the heuristic used by the expert to put the batches in order can fail for particular cases. This way, the solutions computed by the μGAμGA model can be an alternative to support scheduler's decisions. In general, the μGAμGA model has obtained satisfactory solutions with a reduction in the number of time window violations at a low computational cost. Furthermore, the results of the model can present a better level of inventory during the time horizon or reduced product interfaces when compared to the expert solution. When compared to other MOGA model, the results computed by the developed μGAμGA model are similar in terms of quality of solutions, total number of computed non-dominated solutions and solution spread over the Pareto frontier. The computational time of the μGAμGA model is much smaller than the MOGA model for all studied scenarios. However, the fitness function used by both models is based on the solution of a MILP model whose computational time grows with the scenario complexity. This fact may prevent the use of GA models by the company schedulers, even those with small populations such as the model proposed in this work. Nevertheless, the presented results enable the combination of a MILP model with μGAμGA model to deal with real-world and large-scale problems. This is only possible due to three factors. First, the fitness assignment of the hybrid model is based on the weighted sum method that converts a multi-objective problem into a single-objective one. Second, the proposed μGAμGA model has a small population that reduces the computational burden of the ranking procedure. Finally, the use of a reset mechanism combined with niche techniques and elitist strategies assures the convergence of the μGA-MILPμGA-MILP hybrid model to the Pareto frontier and the quality of the obtained solutions. In conclusion, for future reference, a more detailed study and formulation will be carried out according to two guidelines. The first one has the main goal to obtain optimized sequences with other operational criteria such as “minimizing the time delay of batches” or “minimizing pipeline breaks”. The other guideline is related to the computational burden. We are looking for a new way to compute fitness functions in order to reduce the computational time without loss of quality of solutions. In fact, we are looking for a way to parallelize the computation of the MILP timing model associated to each individual in the μGAμGA population.