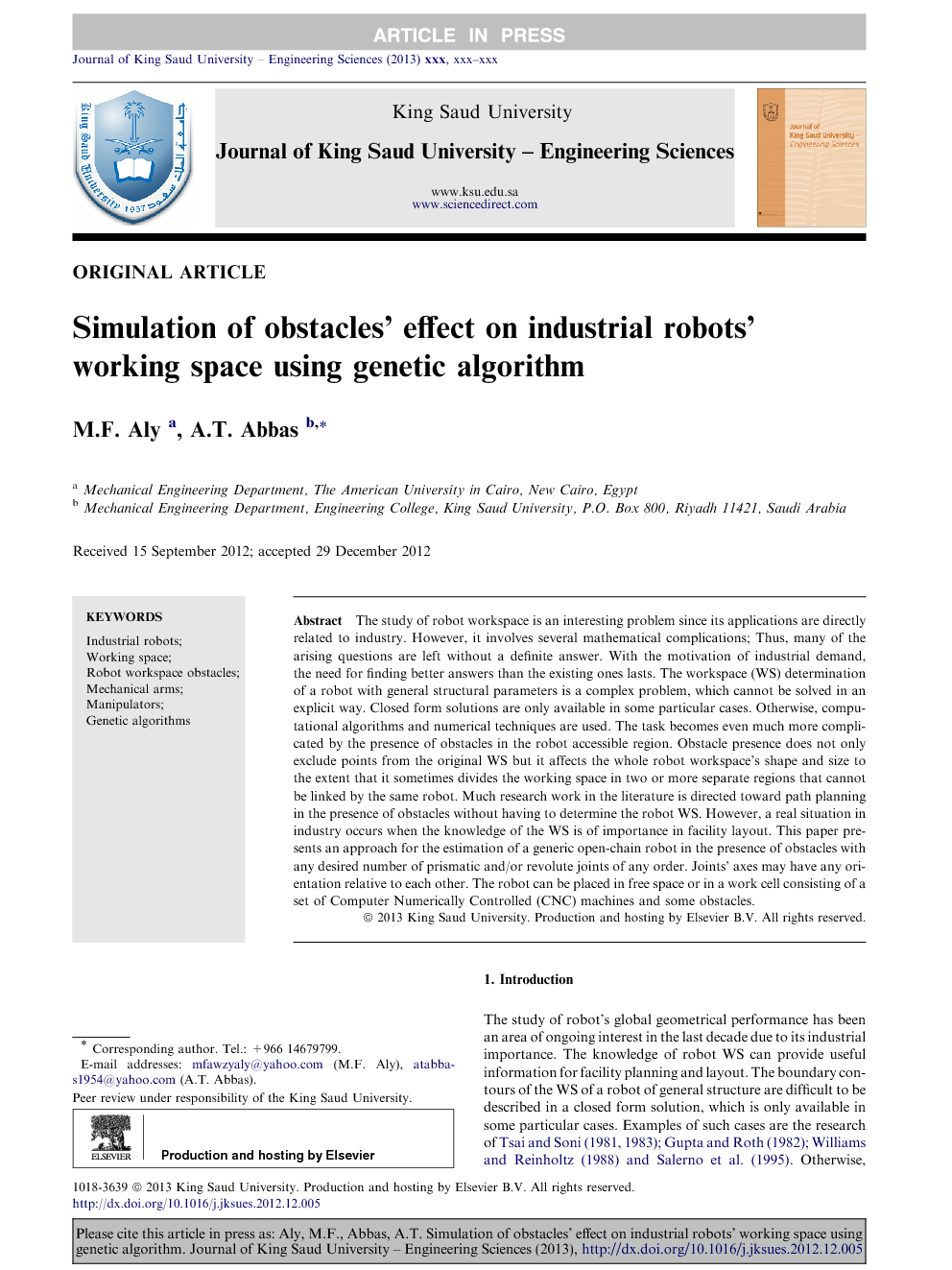 The study of robot workspace is an interesting problem since its applications are directly related to industry. However, it involves several mathematical complications; Thus, many of the arising questions are left without a definite answer. With the motivation of industrial demand, the need for finding better answers than the existing ones lasts. The workspace (WS) determination of a robot with general structural parameters is a complex problem, which cannot be solved in an explicit way. Closed form solutions are only available in some particular cases. Otherwise, computational algorithms and numerical techniques are used. The task becomes even much more complicated by the presence of obstacles in the robot accessible region. Obstacle presence does not only exclude points from the original WS but it affects the whole robot workspace’s shape and size to the extent that it sometimes divides the working space in two or more separate regions that cannot be linked by the same robot. Much research work in the literature is directed toward path planning in the presence of obstacles without having to determine the robot WS. However, a real situation in industry occurs when the knowledge of the WS is of importance in facility layout. This paper presents an approach for the estimation of a generic open-chain robot in the presence of obstacles with any desired number of prismatic and/or revolute joints of any order. Joints’ axes may have any orientation relative to each other. The robot can be placed in free space or in a work cell consisting of a set of Computer Numerically Controlled (CNC) machines and some obstacles.

The study of robot’s global geometrical performance has been an area of ongoing interest in the last decade due to its industrial importance. The knowledge of robot WS can provide useful information for facility planning and layout. The boundary contours of the WS of a robot of general structure are difficult to be described in a closed form solution, which is only available in some particular cases. Examples of such cases are the research of Tsai and Soni, 1981, Tsai and Soni, 1983, Gupta and Roth, 1982, Williams and Reinholtz, 1988 and Salerno et al., 1995. Otherwise, numerical techniques and computational algorithms are used such as the work of Liegeois et al., 1986, Kumar and Patel, 1986, Riley and Torfason, 1994, Wang and Hsieh, 1998 and Megahed and S.M., 2001. Other researchers resorted to experimental design for workspace estimation as in the work of Chen et al. (2007). One of the major factors that affect the geometry and size of the robot WS is the presence of obstacles in its accessible region. (Wenger, 1989) studied the influence of obstacles represented by different constituents of a work cell on the robot WS. His work aimed to characterize the free WS of a robot and the changes that occur in the presence of obstacles. However, the methodology used by Wenger was based on an exhaustive search, in which the computational effort increases with the increase in the number of actuated axes. Trials of such methodology show that exhaustive search is not suited for robots with more than three joints. A lot of up to date research is oriented toward planning of robot motions in the presence of stationary and moving obstacles in its accessible region (Marchis et al., 1994, Kavraki, 1995, Curto and B., 1997, Huang and Lawrence, 1999, Kyatkin and Chirikjian, 1999 and Abdel-Malik and Yang, 2005). Some of this work uses visual tracking for robot control and path planning such as the work of Tsai (Tsai and Song, 2009) while others use PLC coding and model generation for collision detection within a workcell (Flordal et al., 2007). Estimation of the full WS of a robot of a general structure in the presence of obstacles is an under-explored topic, which needs more study and investigation. This paper presents a technique for approximate estimation of the WS of a simple chain robot of general structure having any number of joints in the presence of obstacles in its accessible region. These joints may be of revolute (R) and/or prismatic (P) type. Robot type may be represented by a series of letters R and/or P starting from its base.

This paper presents a new and efficient numerical technique for the estimation of the working space of any open chain robot arms with different types of joints and orientations. Also, a computational algorithm for the robot workspace estimation in presence of obstacles is developed. The numerical technique proposed is based on a new approach. This approach suggests the discretization of the search volume into a finite number of points in order to minimize the computational time. This discretization is performed according to the desired accuracy and search volume size. A sweeping process of an existing surface through the active joint range of motion is then performed. The closest point in the discretized search volume to the swept one is added to the WS and this procedure is repeated for all points on the existing surface to obtain a new one. An incremental increase in the joint position from its initial value to the final one creates the final WS. This sweeping process is then repeated for all the robot joints beginning from the last one till the ground to obtain the whole WS of the robot. Two industrial robots of different configurations are used for the verification of the developed technique and show the similarity between the estimated WS obtained by the algorithm and the WS provided by the robot manufacturer. For the same problem in the presence of obstacles, judgment of search volume points as accessible or inaccessible is formulated as an optimization problem that is solved using genetic search. The genetic search is thus used to classify the points in this search volume into accessible points and inaccessible points which cannot be reached by the robot without one of the robot links interfering with any of the present obstacles. Two case studies are presented to demonstrate the effectiveness of the proposed technique. The proposed technique is tested for the cases of single open chain robot arms but can be generalized to more complex robot configurations. The generalization however, requires the methodology of computing the position and orientation of all the robot links to be available. The major advantage of the proposed algorithm is that it provides detailed information about the whole robot WS and not only the outer work envelop as provided by the robot manufacturers. Most of the available software provides only means of path planning of robot arms in the presence of obstacles which no robot manufacturer offers. The proposed algorithm is generalized in the means that it can adapt to obstacles geometry changes as well as obstacle position changes relative to the robot base which can alter the resulting robot accessible region drastically and change the WS shape. Robot manufacturers do not offer this type of information and the available software will only provide a path plan for the arm movements and will need to be checked every time the robot is required to perform a different task or go to new positions (Delphi, 1997). Path planning is an important step but it becomes next to selecting the suitable robot for a certain job. In order to do so, we have to provide the end-user with the robot type and the corresponding working space to determine if it can serve in a certain location with some constraints or not. Robots provider provides only the working envelop of each industrial robot that consists of the maximum reach in the 3 main planes. They do not provide software or a method for altering the workspace in the presence of obstacles. Our paper provides a method for the users to produce the working space and the changes that happen to it when changing the obstacle position and/or shape. Some limitations are induced by the genetic search. Genetic search generally requires a large number of objective function evaluations which is time consuming especially if the required accuracy level demands the discretization of the search volume to produce a large number of finite points. A key factor in the genetic search is the choice of population size and maximum number of generations till convergence (Goldberg, 1989). Choice of a relatively large number for both population size and number of generations produces better optimization accuracy at the expense of longer computational time. While using relatively small population size and number of generations reduces the computational time but can lead to some faulty results; difficult locations to reach (such as at the boundary or close to obstacles) may be incorrectly judged as inaccessible. On an average scale, the modified technique can result in reduction of the total computational time to less than half.