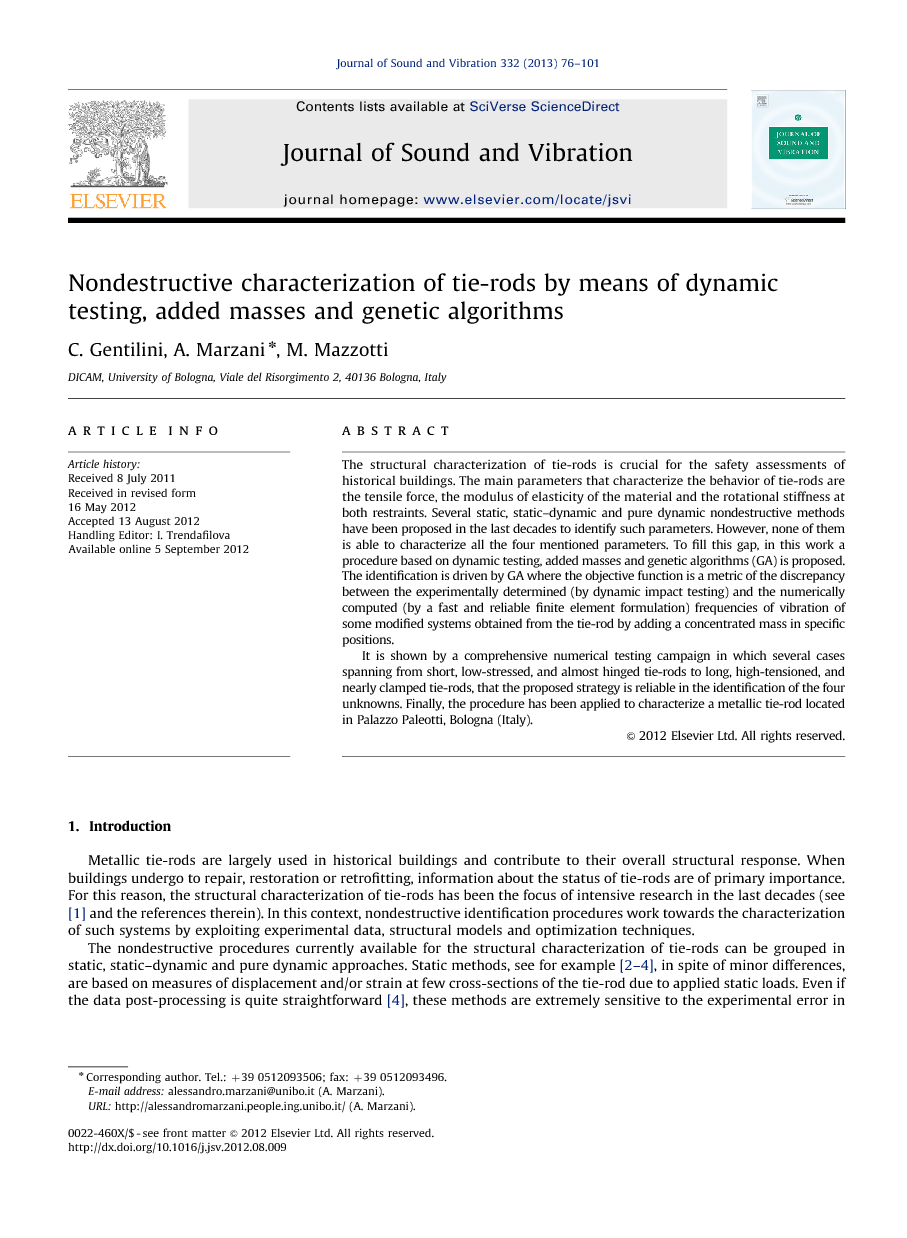 The structural characterization of tie-rods is crucial for the safety assessments of historical buildings. The main parameters that characterize the behavior of tie-rods are the tensile force, the modulus of elasticity of the material and the rotational stiffness at both restraints. Several static, static–dynamic and pure dynamic nondestructive methods have been proposed in the last decades to identify such parameters. However, none of them is able to characterize all the four mentioned parameters. To fill this gap, in this work a procedure based on dynamic testing, added masses and genetic algorithms (GA) is proposed. The identification is driven by GA where the objective function is a metric of the discrepancy between the experimentally determined (by dynamic impact testing) and the numerically computed (by a fast and reliable finite element formulation) frequencies of vibration of some modified systems obtained from the tie-rod by adding a concentrated mass in specific positions. It is shown by a comprehensive numerical testing campaign in which several cases spanning from short, low-stressed, and almost hinged tie-rods to long, high-tensioned, and nearly clamped tie-rods, that the proposed strategy is reliable in the identification of the four unknowns. Finally, the procedure has been applied to characterize a metallic tie-rod located in Palazzo Paleotti, Bologna (Italy).

In this paper a numerical procedure based on genetic algorithms aimed at identifying Young's modulus, the tensile force, and different stiffnesses at the rotational restraints of tie-rods has been proposed. In particular, it has been shown that GA fed with the first few frequencies of vibration of tie-rod systems obtained from the original one by adding a concentrated mass at various locations along the length, allow to identify the target parameters. The required data are the frequencies of vibration that can be obtained in a total nondestructive manner from dynamic testing. Once the testing phase is completed, the added mass is simply removed and the structure comes back to its original state. For this reason, the required equipment is not more cumbersome than that of a typical dynamic test (impact hammer, accelerometers, PC for data acquisition). The only difference is that an added mass should be considered in the experimental apparatus; however, this does not increase the complexity of the instrumentation. The wide numerical identification campaign has revealed that the procedure is reliable also considering very high levels of noise in the pseudo-experimental frequencies. In addition, it has been shown that the fitness function could be strengthened by adding experimental measures obtained from additional tests. Finally, the proposed technique has been applied to characterize a metallic tie-rod located in Palazzo Paleotti, Bologna (Italy). Among the specific benefits of the proposed identification strategy are (i) the use of the added mass in a non-symmetric position allows to identify two different values of the ends rotational stiffness that in literature are generally assumed to be identical; (ii) GA provide convergence regardless the initial guess on the target parameters while sensitivity or gradient based identification schemes do not; (iii) the adopted FEM formulation and the GA scheme are easy to implement especially by using software package like MATLAB where the main GA functions are coded and open-ended to address the user needs.