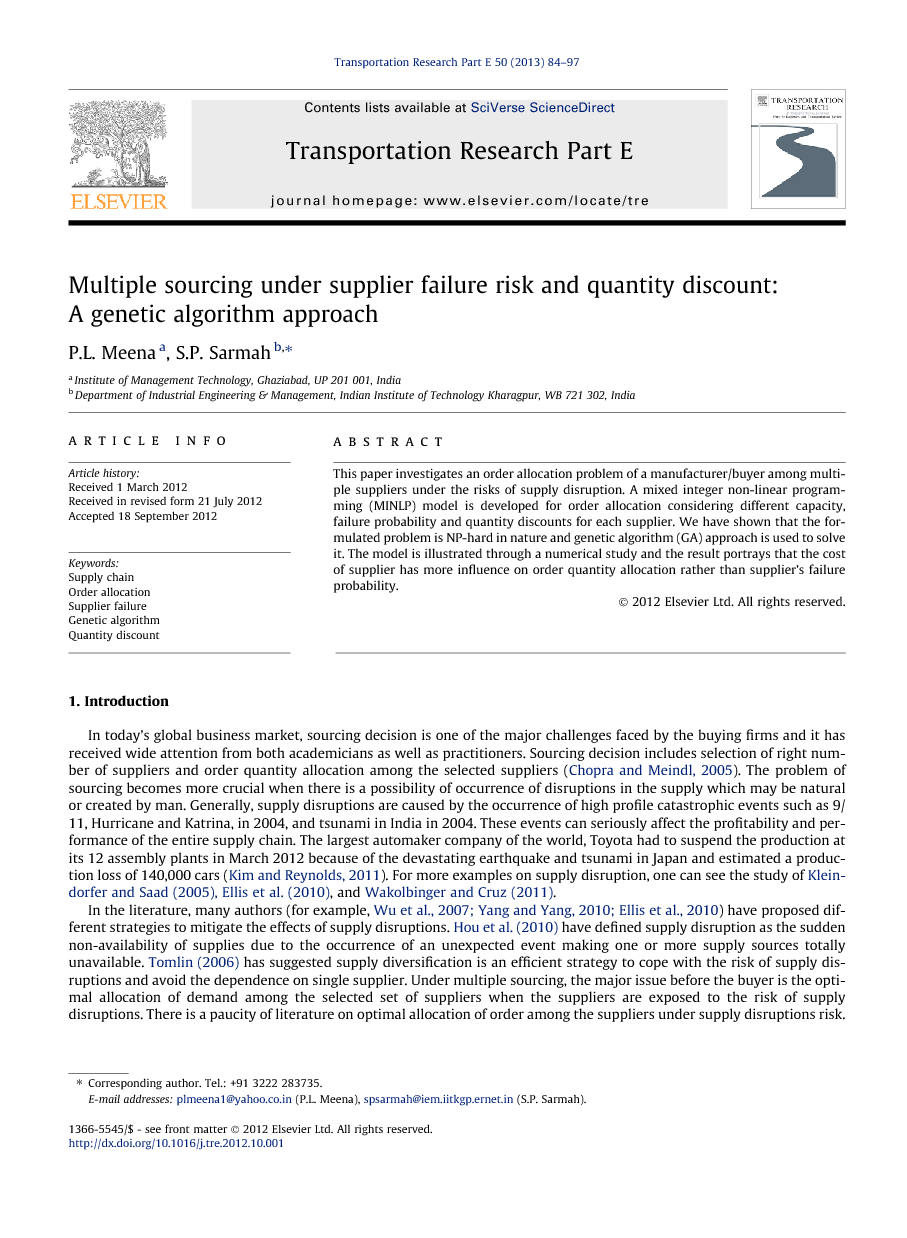 This paper investigates an order allocation problem of a manufacturer/buyer among multiple suppliers under the risks of supply disruption. A mixed integer non-linear programming (MINLP) model is developed for order allocation considering different capacity, failure probability and quantity discounts for each supplier. We have shown that the formulated problem is NP-hard in nature and genetic algorithm (GA) approach is used to solve it. The model is illustrated through a numerical study and the result portrays that the cost of supplier has more influence on order quantity allocation rather than supplier’s failure probability

In today’s global business market, sourcing decision is one of the major challenges faced by the buying firms and it has received wide attention from both academicians as well as practitioners. Sourcing decision includes selection of right number of suppliers and order quantity allocation among the selected suppliers (Chopra and Meindl, 2005). The problem of sourcing becomes more crucial when there is a possibility of occurrence of disruptions in the supply which may be natural or created by man. Generally, supply disruptions are caused by the occurrence of high profile catastrophic events such as 9/11, Hurricane and Katrina, in 2004, and tsunami in India in 2004. These events can seriously affect the profitability and performance of the entire supply chain. The largest automaker company of the world, Toyota had to suspend the production at its 12 assembly plants in March 2012 because of the devastating earthquake and tsunami in Japan and estimated a production loss of 140,000 cars (Kim and Reynolds, 2011). For more examples on supply disruption, one can see the study of Kleindorfer and Saad, 2005 and Ellis et al., 2010, and Wakolbinger and Cruz (2011). In the literature, many authors (for example, Wu et al., 2007, Yang and Yang, 2010 and Ellis et al., 2010) have proposed different strategies to mitigate the effects of supply disruptions. Hou et al. (2010) have defined supply disruption as the sudden non-availability of supplies due to the occurrence of an unexpected event making one or more supply sources totally unavailable. Tomlin (2006) has suggested supply diversification is an efficient strategy to cope with the risk of supply disruptions and avoid the dependence on single supplier. Under multiple sourcing, the major issue before the buyer is the optimal allocation of demand among the selected set of suppliers when the suppliers are exposed to the risk of supply disruptions. There is a paucity of literature on optimal allocation of order among the suppliers under supply disruptions risk. In this paper, we have developed a mixed integer non-liner programming (MINLP) model to determine the optimal order allocation among multiple suppliers when the suppliers are exposed to the risk of failure due to man-made or natural disruptions. We have shown here that the formulated problem is NP-hard in nature, and genetic algorithm (GA) is used to solve it. The reason of using GA is that it has been proven to excel in solving combinatorial optimization problems in comparison to traditional optimization techniques ( Goldberg, 1998 and Steiner and Hruschka, 2002). The remainder of the paper is organized as follows: Section 2 provides a brief review of literature related to order allocation problem. Description of the problem and development of the model are presented in Section 3. The problem complexity is discussed in Section 4. Section 5 presents the GA approach to find the solution. Numerical experiments are conducted in Section 6 and sensitivity analysis of different parameters is performed in Section 7. Finally, conclusions and future scope of the work are presented in Section 8.

In this paper, we studied the optimal order allocation problem under supplier failure risk and quantity based price discounts. The specific contributions of this paper to the relevant literature are as follows. First, a mixed integer non-linear programming (MINLP) problem is developed considering different capacity, failure probability, price discounts and compensation potential for each supplier. As far as we are aware, no such study is present in the literature that has considered all the aforementioned parameters together. Consideration of all these parameters together has made the problem more realistic but also at the same time more complex. Next, we have proved that the formulated problem is NP-hard in nature. This type of problems is difficult to solve with any exact method for optimality. Therefore, non-traditional optimization technique genetic algorithm (GA) is used here to solve the problem. Finally, different numerical experiments are conducted to illustrate the model and GA to find the solution of the problem. The results of numerical study portray that the cost of supplier has more influence on order quantity allocation rather than supplier’s failure probability. The supplier’s with high discount receives more order quantity as compared to other suppliers. Further, it is found that if the price discounts of all suppliers are equal then the supplier with less failure probability will get the maximum order quantity. The results suggest that allocation of maximum order quantity to one supplier of high price discount and allocation of minimum order quantity to rest of the suppliers is the best strategy. Allocation of maximum order quantity to the high discount providing supplier will reduce the cost and the buyer can keep lesser failure probability suppliers as backup for emergency. The results of sensitivity analysis depict that as the value of price discount increases, the allocation of order quantity among all suppliers comes closer or equal in-spite of higher difference in failure probabilities of suppliers. It is found that when a supplier has large capacity, it is efficient to order more quantity from one supplier. The results also reveal that when all the suppliers have same price break quantity, the supplier with higher capacity receives maximum order quantity in spite of its higher failure probability. Further, it is observed that management cost and loss per unit have no impact on demand allocation decision. In future, several interesting extensions are possible of this paper. Here, it is assumed that demand is deterministic. Consideration of stochastic demand will be an interesting problem for future study. Further, it is assumed that the compensation (i.e. extra quantity) provided by the supplier comes at no extra cost. However, in reality, supplier may charge higher cost for supplying extra quantity. Finally, one can extend the model developed here for multi-periods and multi-items environment.