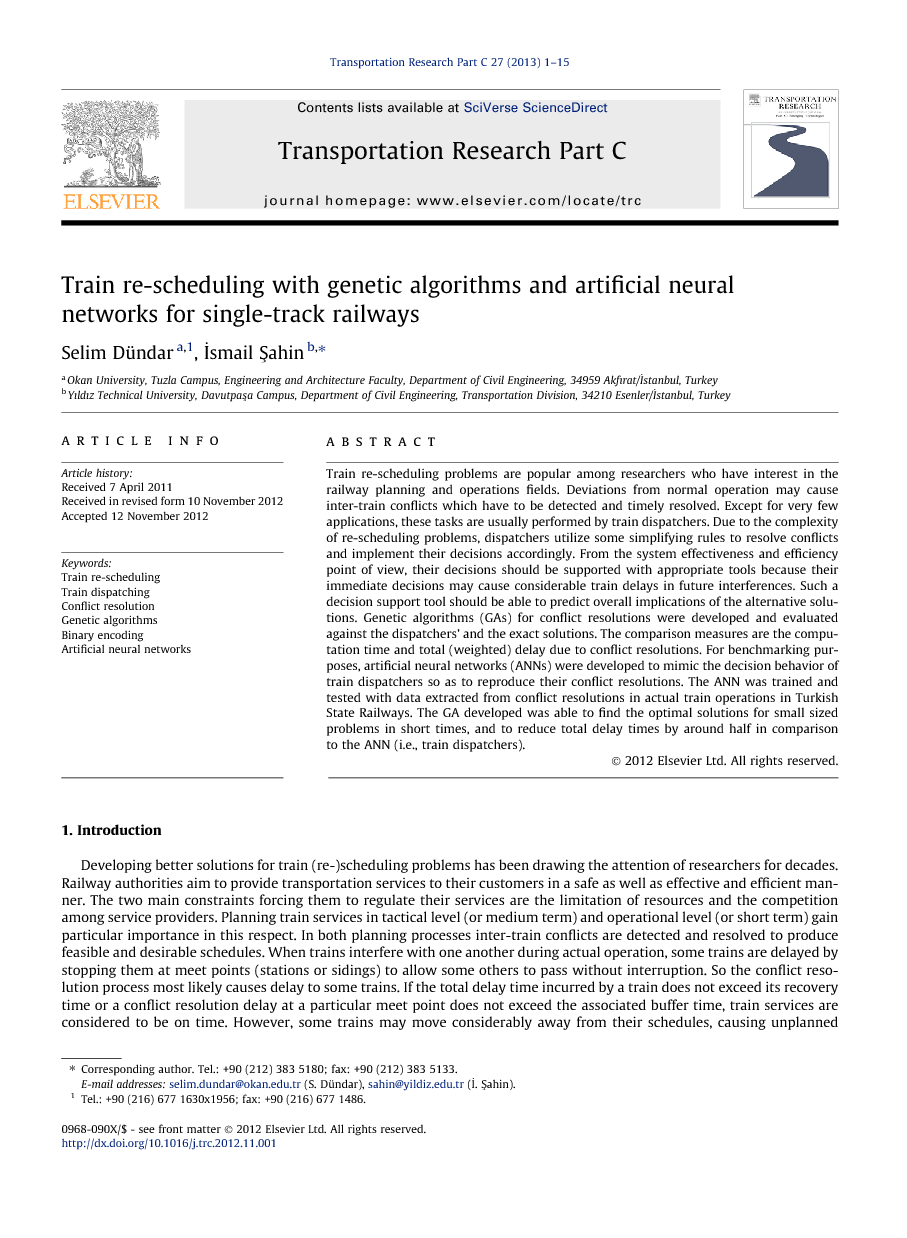 Train re-scheduling problems are popular among researchers who have interest in the railway planning and operations fields. Deviations from normal operation may cause inter-train conflicts which have to be detected and timely resolved. Except for very few applications, these tasks are usually performed by train dispatchers. Due to the complexity of re-scheduling problems, dispatchers utilize some simplifying rules to resolve conflicts and implement their decisions accordingly. From the system effectiveness and efficiency point of view, their decisions should be supported with appropriate tools because their immediate decisions may cause considerable train delays in future interferences. Such a decision support tool should be able to predict overall implications of the alternative solutions. Genetic algorithms (GAs) for conflict resolutions were developed and evaluated against the dispatchers’ and the exact solutions. The comparison measures are the computation time and total (weighted) delay due to conflict resolutions. For benchmarking purposes, artificial neural networks (ANNs) were developed to mimic the decision behavior of train dispatchers so as to reproduce their conflict resolutions. The ANN was trained and tested with data extracted from conflict resolutions in actual train operations in Turkish State Railways. The GA developed was able to find the optimal solutions for small sized problems in short times, and to reduce total delay times by around half in comparison to the ANN (i.e., train dispatchers)

A genetic algorithm (GA) for single-track railway train re-scheduling is developed and tested for 51 hypothetical problem instances. To evaluate the effectiveness of solutions provided by the GA, the results are compared with those obtained by two different supplementary solution methods, namely the artificial neural network (ANN) of train dispatchers and the exact model. The test outcomes show that the GA is superior in terms of computation time and total delay (as a measure of effectiveness) with respect to the exact model, and in terms of total delay with respect to the ANN. The GA is able to find optimal solutions for small-sized problems (up to 6 trains, 2 × 4) in about 81 s. For the rest of the problem instances (up to 17 trains, 8 × 9), the GA is able to reach solutions the same as or better than those of the ANN, the mimic model of train dispatchers. The GA can provide up to twice as better solutions in terms of total delay than those of the ANN. With respect to computation times, the GA can give better solutions in 331 s for the large problem instances tested. The GA is terminated when some stopping criteria is reached even if the convergence continues. The termination occurs when an acceptable limit for generation number, computation time, or goodness of total delay is reached. Although the GA can provide better solutions than the ANN mimicking the dispatchers, this does not mean that the models developed replace train dispatchers. On the contrary, such tools can and should only support decisions of the train dispatchers on duty. On the other hand, we can infer from the comparisons that their decisions are usually “good enough” given the complex nature of the conflict resolution problem. The GA shows us the existence of better conflict resolutions. Therefore, further investigation of train dispatchers’ decision could be made for both examining possible measures they employ but may have overlooked and finding ways to improve their decisions towards optimal decisions. It should be noted that we did not notice any specific circumstances in the train-graphs (actual schedules) that we extracted the data for ANN training and testing. But all these issues deserve further investigations. The performance of the GA developed could be improved in terms of computation time and measure of effectiveness by introducing some instrumental rules to the algorithm. The binary GA modeling approach of train re-scheduling is a simple and efficient method compared to another coding scheme in the literature implemented in this study. Eliminating the unnecessary conflicts (associated with non-interfering trains) in the individual (chromosome) representation may shorten computation time. Starting the GA with a better initial feasible schedule representation instead of a completely random one may also contribute to the increase of convergence speed. Introducing some intelligence to the crossover operator may also improve the performance of the GA.