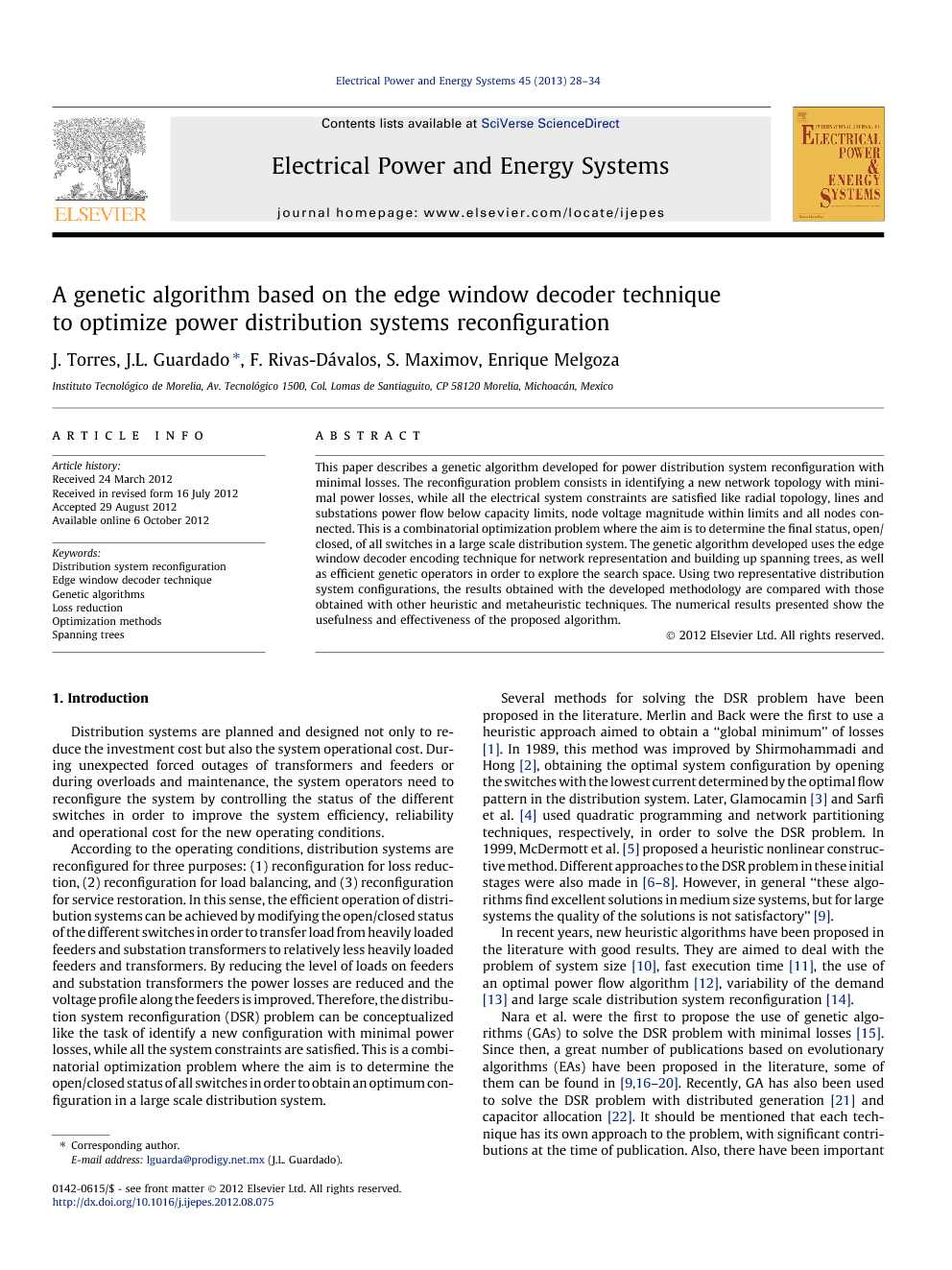 This paper describes a genetic algorithm developed for power distribution system reconfiguration with minimal losses. The reconfiguration problem consists in identifying a new network topology with minimal power losses, while all the electrical system constraints are satisfied like radial topology, lines and substations power flow below capacity limits, node voltage magnitude within limits and all nodes connected. This is a combinatorial optimization problem where the aim is to determine the final status, open/closed, of all switches in a large scale distribution system. The genetic algorithm developed uses the edge window decoder encoding technique for network representation and building up spanning trees, as well as efficient genetic operators in order to explore the search space. Using two representative distribution system configurations, the results obtained with the developed methodology are compared with those obtained with other heuristic and metaheuristic techniques. The numerical results presented show the usefulness and effectiveness of the proposed algorithm

Distribution systems are planned and designed not only to reduce the investment cost but also the system operational cost. During unexpected forced outages of transformers and feeders or during overloads and maintenance, the system operators need to reconfigure the system by controlling the status of the different switches in order to improve the system efficiency, reliability and operational cost for the new operating conditions. According to the operating conditions, distribution systems are reconfigured for three purposes: (1) reconfiguration for loss reduction, (2) reconfiguration for load balancing, and (3) reconfiguration for service restoration. In this sense, the efficient operation of distribution systems can be achieved by modifying the open/closed status of the different switches in order to transfer load from heavily loaded feeders and substation transformers to relatively less heavily loaded feeders and transformers. By reducing the level of loads on feeders and substation transformers the power losses are reduced and the voltage profile along the feeders is improved. Therefore, the distribution system reconfiguration (DSR) problem can be conceptualized like the task of identify a new configuration with minimal power losses, while all the system constraints are satisfied. This is a combinatorial optimization problem where the aim is to determine the open/closed status of all switches in order to obtain an optimum configuration in a large scale distribution system. Several methods for solving the DSR problem have been proposed in the literature. Merlin and Back were the first to use a heuristic approach aimed to obtain a “global minimum” of losses [1]. In 1989, this method was improved by Shirmohammadi and Hong [2], obtaining the optimal system configuration by opening the switches with the lowest current determined by the optimal flow pattern in the distribution system. Later, Glamocamin [3] and Sarfi et al. [4] used quadratic programming and network partitioning techniques, respectively, in order to solve the DSR problem. In 1999, McDermott et al. [5] proposed a heuristic nonlinear constructive method. Different approaches to the DSR problem in these initial stages were also made in [6], [7] and [8]. However, in general “these algorithms find excellent solutions in medium size systems, but for large systems the quality of the solutions is not satisfactory” [9]. In recent years, new heuristic algorithms have been proposed in the literature with good results. They are aimed to deal with the problem of system size [10], fast execution time [11], the use of an optimal power flow algorithm [12], variability of the demand [13] and large scale distribution system reconfiguration [14]. Nara et al. were the first to propose the use of genetic algorithms (GAs) to solve the DSR problem with minimal losses [15]. Since then, a great number of publications based on evolutionary algorithms (EAs) have been proposed in the literature, some of them can be found in [9], [16], [17], [18], [19] and [20]. Recently, GA has also been used to solve the DSR problem with distributed generation [21] and capacitor allocation [22]. It should be mentioned that each technique has its own approach to the problem, with significant contributions at the time of publication. Also, there have been important contributions to the DSR problem by using other metaheuristics techniques like plant growth [23], particle swarm optimization [24], tabu search [25] and ant colony search [26] and [27], among others. One of the main difficulties for solving the DSR problem using evolutionary algorithms is the radiality constraint. This constraint not only creates difficulties in the formation of the initial population but also during intermediate stages of the evolutionary process. Also, a proper selection of the encoding strategy and genetic operators is a key factor for solving efficiently the DSR problem. In this sense, new encoding strategies and genetic operators for evolutionary techniques have been proposed by researchers in the EA community. In general, these techniques have attempted to find a way to reach a balance between the encoding properties of locality, heritability and diversity. The locality property is defined as how well neighboring genotypes correspond to neighboring phenotypes. Therefore, the locality of an EA is high if small changes in the genotype result in small changes in the corresponding phenotype. Mutation operators are usually responsible for small changes in a phenotype space. The heritability property means how many structures belonging to parent solutions are transferred to new offspring. This property is determined by the crossover operator and it is desirable that key features can be propagated from one generation to the next one. Equally important is a population with high diversity in order to avoid a premature convergence and local optima. In sum, all these properties are strongly dependent on the encoding strategy and the genetic operators used. In Ref. [28] it is presented an assessment of several encoding strategies and genetic operators representative of the state of the art. In several tests using the Optimum Communication Spanning Tree (OCST) problem as a base case, eight encoding strategies and their genetic operators were compared. According to [28], the results shown that the edge window decoder (EWD) [29] and the edge set (ES) [30] encoding strategies seems to have a good performance for solving the OCST problem, and potentially other spanning tree based problems. Since a power distribution system in operation is basically a spanning tree, the DSR problem can be solved by using a minimum spanning tree formulation where evolutionary algorithms search efficiently for the optimal reconfiguration. The approach used in this paper for representing the distribution system is based on the EWD technique which ensures radiality and facilitates the use of efficient genetic operators for crossing and mutation. The EWD technique is modified and embedded in a genetic algorithm specially designed to deal with the DSR problem.

In this paper a genetic algorithm for solving the DSR problem has been presented. The codification strategy is based on the EWD encoding technique, which leads only to radial configurations. The crossover and mutation operators for the proposed encoding technique are described and they offer a strong heritability and computational efficiency. The EWD-Reconfig algorithm has been also successfully tested on several distribution systems achieving the configuration with minimal losses, two of these systems are presented in the paper. The results have shown that the proposed encoding strategy is an effective alternative for the solution of the DSR problem, and all of the descendants generated represent a topological valid solution (radial configuration). Also, the descendants generated by the crossing operators consist mostly of substructures of their parents, which allow that good properties of the parents being passed to the descendants, and this can yields a smaller number of generations and individuals to be evaluated (power flows solved) in order to obtain the best solution. The sensitivity study carried out shows that the performance of the EWD-Reconfig algorithm developed is dependent on the genetic parameters values like many metaheuristic methods. Thus, a compromise must be established between accuracy and computational effort, like in many engineering problems. Based in our experience with the EWD-Reconfig algorithm, for an optimal solution on DSR problems an initial population size of around the total number of system branches can be considered as suitable. On the other hand, crossing and mutation rates of 0.8 are also recommended. For a less accurate but faster solution, lower population sizes and small crossing and mutation rates can be used. The comparison with published results using other techniques indicates that the EWD-Reconfig algorithm shows acceptable levels of accuracy (power losses) and computational effort (power flows runs). It can be said that the EWD-Reconfig algorithm is suitable to solve the reconfiguration problem in large-scale power distribution systems. Future works should address the problem of improving the genetic operators in order to accelerate and facilitate the search of feasible solutions.