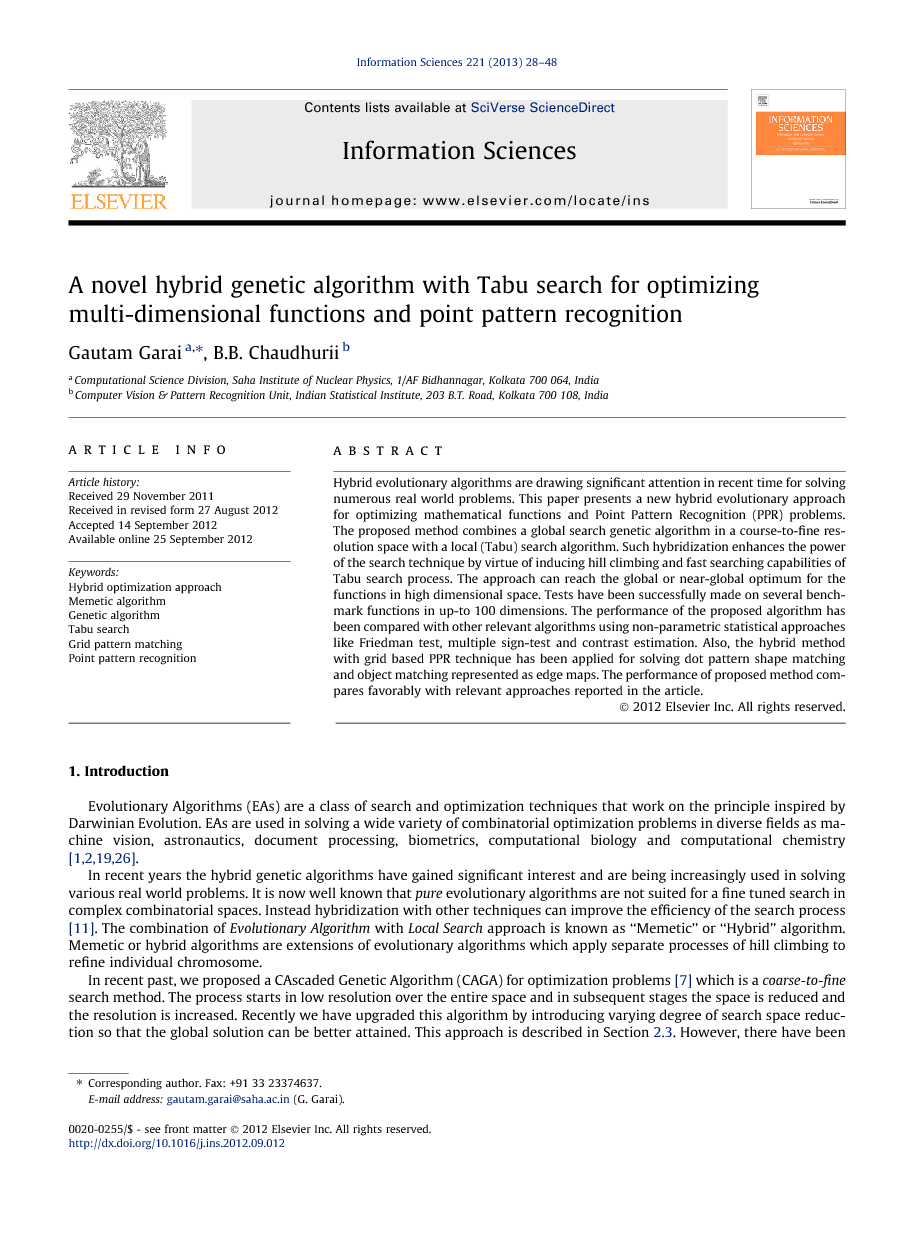 Hybrid evolutionary algorithms are drawing significant attention in recent time for solving numerous real world problems. This paper presents a new hybrid evolutionary approach for optimizing mathematical functions and Point Pattern Recognition (PPR) problems. The proposed method combines a global search genetic algorithm in a course-to-fine resolution space with a local (Tabu) search algorithm. Such hybridization enhances the power of the search technique by virtue of inducing hill climbing and fast searching capabilities of Tabu search process. The approach can reach the global or near-global optimum for the functions in high dimensional space. Tests have been successfully made on several benchmark functions in up-to 100 dimensions. The performance of the proposed algorithm has been compared with other relevant algorithms using non-parametric statistical approaches like Friedman test, multiple sign-test and contrast estimation. Also, the hybrid method with grid based PPR technique has been applied for solving dot pattern shape matching and object matching represented as edge maps. The performance of proposed method compares favorably with relevant approaches reported in the article.

The performance of H-CAGA on twenty high and low dimensional benchmark functions shows its improvement over other relevant methods. It has the capability to reach the global optimum for most of the problems having dimension 100 by slowing down the partitioning process. On the other hand, the non-parametric test for statistical analysis also shows that H-CAGA performs better than the other optimizing methods. The point pattern matching approach depends on the matching score of two point patterns by finding an optimal transformation. The efficiency of the proposed pattern matching technique (GOPM) is enhanced with the dual applications of hybrid cascaded GA and grid based approach. The grid based approach helps to match much lesser number of points for entire pattern matching. In the experiment it was noticed that the success rate of the genetic techniques for pattern matching improves with the increase of the degree of overlapping objects in the pattern. The best result is usually achieved by any of these techniques for the centrally located P1 pattern. We have performed our pattern matching experiment on some synthetic point patterns except the image of Lena. We can extend our test for some real point patterns in future. There is also a scope for future work to increase the dimension of the mathematical functions beyond 100 to examine the limits of the slow partitioning process.