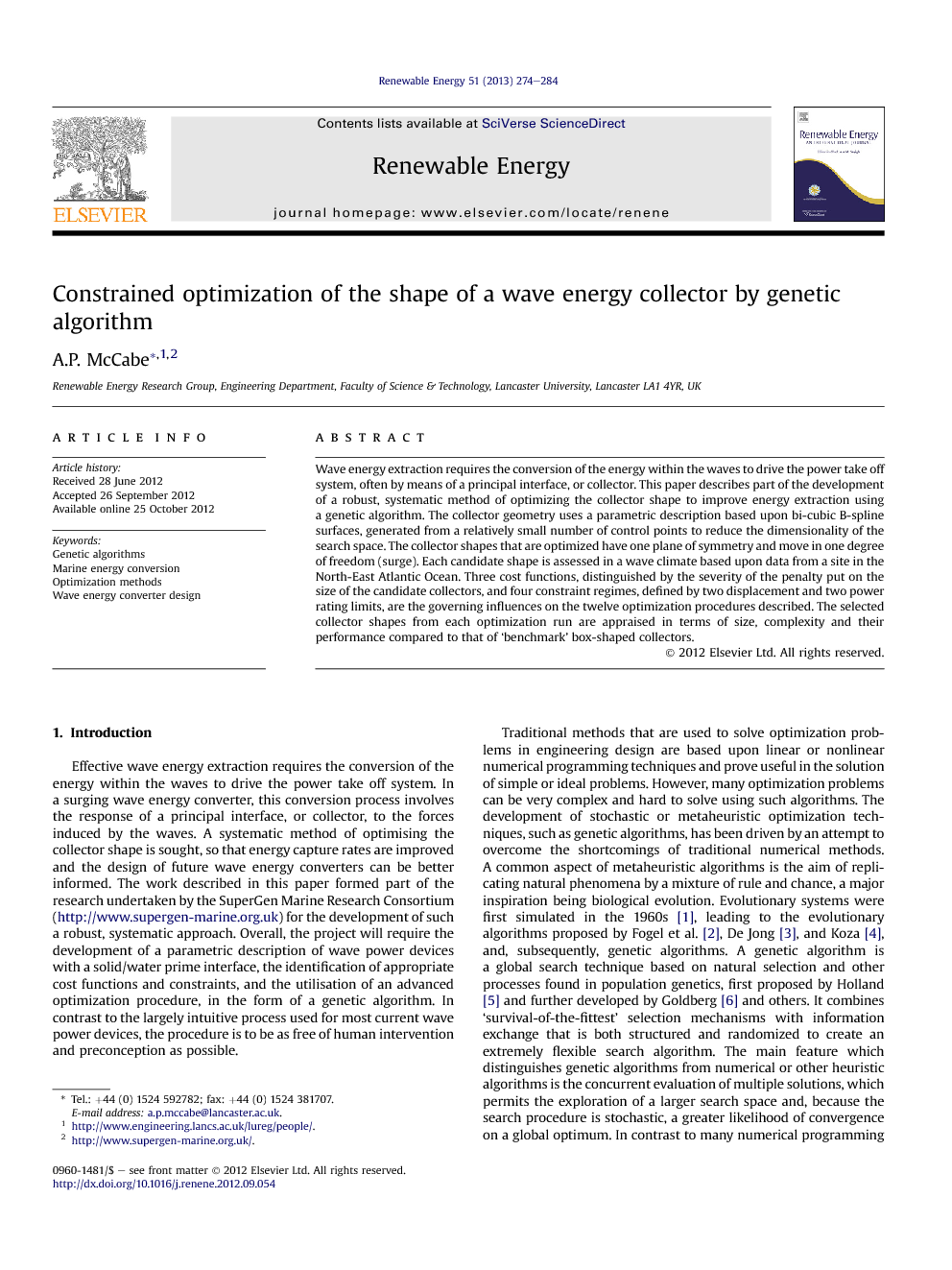 Wave energy extraction requires the conversion of the energy within the waves to drive the power take off system, often by means of a principal interface, or collector. This paper describes part of the development of a robust, systematic method of optimizing the collector shape to improve energy extraction using a genetic algorithm. The collector geometry uses a parametric description based upon bi-cubic B-spline surfaces, generated from a relatively small number of control points to reduce the dimensionality of the search space. The collector shapes that are optimized have one plane of symmetry and move in one degree of freedom (surge). Each candidate shape is assessed in a wave climate based upon data from a site in the North-East Atlantic Ocean. Three cost functions, distinguished by the severity of the penalty put on the size of the candidate collectors, and four constraint regimes, defined by two displacement and two power rating limits, are the governing influences on the twelve optimization procedures described. The selected collector shapes from each optimization run are appraised in terms of size, complexity and their performance compared to that of ‘benchmark’ box-shaped collectors.

Effective wave energy extraction requires the conversion of the energy within the waves to drive the power take off system. In a surging wave energy converter, this conversion process involves the response of a principal interface, or collector, to the forces induced by the waves. A systematic method of optimising the collector shape is sought, so that energy capture rates are improved and the design of future wave energy converters can be better informed. The work described in this paper formed part of the research undertaken by the SuperGen Marine Research Consortium (http://www.supergen-marine.org.uk) for the development of such a robust, systematic approach. Overall, the project will require the development of a parametric description of wave power devices with a solid/water prime interface, the identification of appropriate cost functions and constraints, and the utilisation of an advanced optimization procedure, in the form of a genetic algorithm. In contrast to the largely intuitive process used for most current wave power devices, the procedure is to be as free of human intervention and preconception as possible. Traditional methods that are used to solve optimization problems in engineering design are based upon linear or nonlinear numerical programming techniques and prove useful in the solution of simple or ideal problems. However, many optimization problems can be very complex and hard to solve using such algorithms. The development of stochastic or metaheuristic optimization techniques, such as genetic algorithms, has been driven by an attempt to overcome the shortcomings of traditional numerical methods. A common aspect of metaheuristic algorithms is the aim of replicating natural phenomena by a mixture of rule and chance, a major inspiration being biological evolution. Evolutionary systems were first simulated in the 1960s [1], leading to the evolutionary algorithms proposed by Fogel et al. [2], De Jong [3], and Koza [4], and, subsequently, genetic algorithms. A genetic algorithm is a global search technique based on natural selection and other processes found in population genetics, first proposed by Holland [5] and further developed by Goldberg [6] and others. It combines ‘survival-of-the-fittest’ selection mechanisms with information exchange that is both structured and randomized to create an extremely flexible search algorithm. The main feature which distinguishes genetic algorithms from numerical or other heuristic algorithms is the concurrent evaluation of multiple solutions, which permits the exploration of a larger search space and, because the search procedure is stochastic, a greater likelihood of convergence on a global optimum. In contrast to many numerical programming methods, a genetic algorithm does not require the cost function to be smooth (that is, continuously differentiable up to some desired order over some domain), since the operation of the algorithm is based only on the cost function values themselves. Efficiency in the search process of a genetic algorithm is a balance between the exploitation of the best current resources (by retention of the best individuals) and exploration for new, possibly better resources (by recombination or mutation). The relative emphasis on exploitation and exploration, therefore, determines the rate of convergence on the solution and the diversity of the population evaluated during the search. Genetic algorithms and other evolutionary computation methods have recently been applied in several areas of structural design optimization. A popular subject for study is the optimal design of steel frame structures, for example [7] and [8], while some have concentrated upon optimizing the design of planar structures, for example [9] and [10]. Many have also studied the use of genetic algorithms in the optimization of solid structures, mainly to improve the bearing of loads. Various geometric representations have been used, both for defining the surface of the structure and for the cost function analysis. The definition of the search space, by selection of the right representation of the geometry, is a crucial factor in the success of the optimization [11]. In many cases, surfaces are discretized for analysis, in the form of meshes, which are then represented as a bit-array in the genetic algorithm. A major shortcoming of the bit-array representation is that, with fine surface discretization meshes, the array size and the associated computational effort required becomes impracticably large [12]. To alleviate this complexity, several methods which disconnect the representation from the surface mesh used in the computation of the cost function have been introduced. For example, boundary element analysis methods have been used in [13] with a free form deformation technique to control the mesh. Another example is the integrated approach for 2-D and 3-D structural shape optimization used in [14], employing a β-spline surface representation, along with a genetic algorithm optimization process and boundary element method to calculate the structural stresses. A rare example of the use of a genetic algorithm in the optimization of the design of a wave energy converter is that of Babarit et al. [15], for the SEAREV device. The procedure adopted is a hybrid genetic/gradient-descent method. Patel et al. [16], suggest a method which may be applied to the control of devices similar to Pelamis [17] using an artificial neural network, optimized by genetic algorithms. This paper describes the use of a genetic algorithm to optimize the shape of a wave energy collector with different cost functions under a range of constraint conditions. The type and structure of the genetic algorithm used is given in Section 2. The conversion of the geometric description of the collector shapes into a form suitable for use by the genetic algorithm is described in Section 3. Section 4 covers the formulation of the cost functions. The results are described and discussed in Section 5, and conclusions are presented in Section 6.

A study into the optimization of the shape of a wave energy collector operating in a realistic wave climate has been described. The shape is optimized by an advanced metaheuristic optimization procedure, in the form of a genetic algorithm. A parametric description of the wave energy collector geometry, based upon bi-cubic B-spline surfaces, is used. The candidate collectors move in one degree of freedom (surge). Assessment of the shapes is made using three different cost functions, each in four different constraint regimes defined by two displacement and two power delivery limits. The cost functions are formulated using estimates of the weighted mean power delivered in a wave climate based upon data from a site on the West Shetland Shelf in the North-East Atlantic Ocean. For each sea state the mean power is the average of ten estimates made with ten waves, synthesized from the same spectrum, but having different phase characteristics to give different patterns of conflict with the constraints. Four independent runs of the algorithm are performed, each of fifty generations, after which the ‘best’ shapes initiate a final run of fifty generations. The cost function values of the selected collectors are compared with those of ‘benchmark’ box-shaped collectors. The different cost functions have a far greater effect on the resulting shape than either the displacement or power rating constraints. Different penalties on the size of the collector produces great differences in size and complexity in the selected shapes. With no penalty on size, large, simple collector shapes that are virtually hemispheres are selected. When there are penalties on size, smaller, more complicated collector shapes are selected. The four shapes selected by the cost function with the heaviest penalty on size are particularly complex, although still described by a relatively small number of control points. The smaller shapes show pronounced asymmetry in the direction of wave propagation with distinct, pointed prows and sterns, the two optimized under the more stringent displacement constraint exhibiting distinct ‘wing’ features. Although a handful of collector shapes produced exceptional results, the vast majority that were assessed were quite similar in performance, because of the more realistic, constrained regime that was imposed on the optimization. Nevertheless, all of the selected shapes can be shown to perform better than a comparable box-shaped collector, with the performance difference increasing dramatically as the size decreases. Even assuming optimistic estimates from the computer models, the results suggest that optimizing the collector shape with regard to size as well as overall mean power delivery can improve its performance substantially.