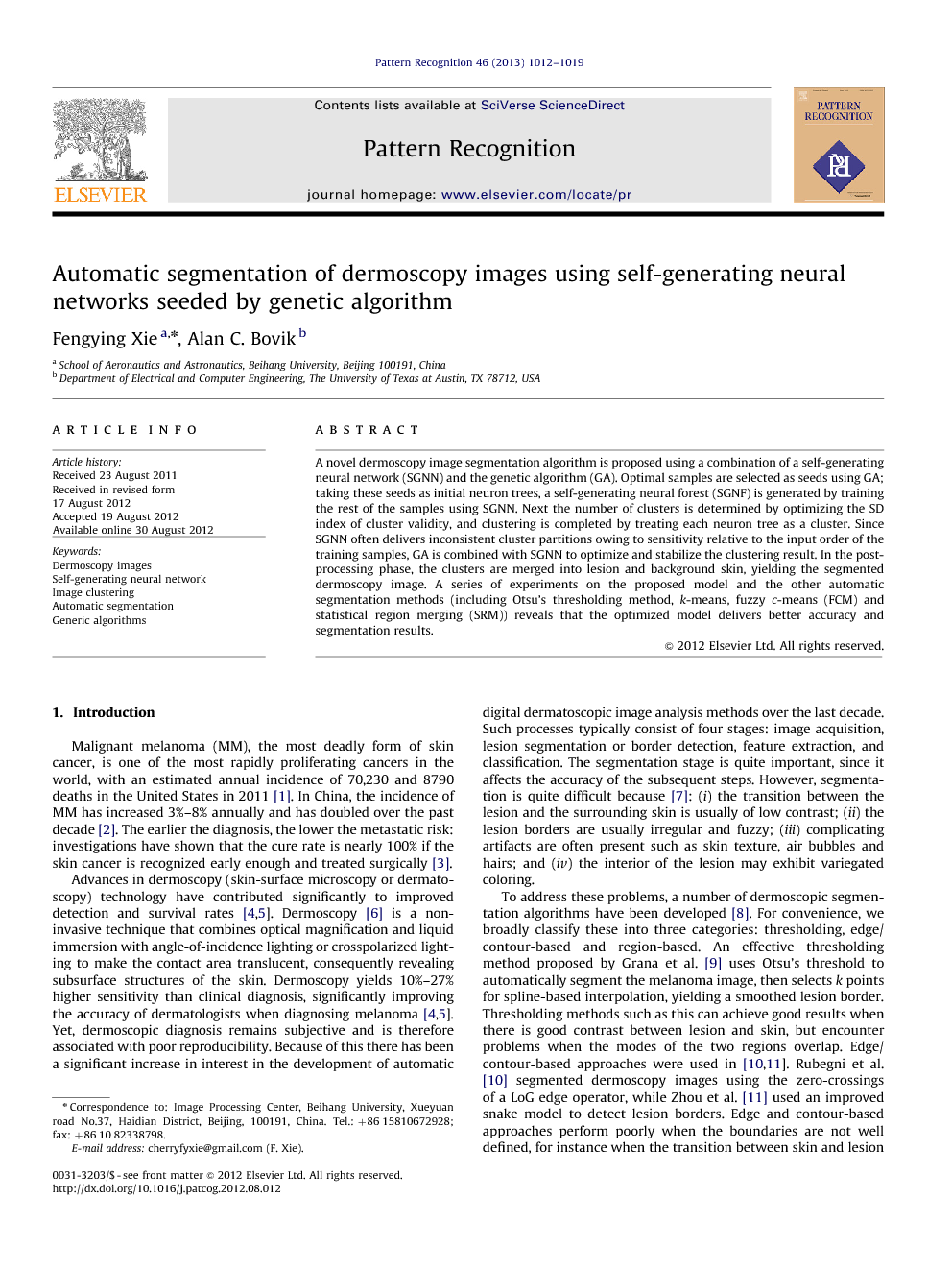 A novel dermoscopy image segmentation algorithm is proposed using a combination of a self-generating neural network (SGNN) and the genetic algorithm (GA). Optimal samples are selected as seeds using GA; taking these seeds as initial neuron trees, a self-generating neural forest (SGNF) is generated by training the rest of the samples using SGNN. Next the number of clusters is determined by optimizing the SD index of cluster validity, and clustering is completed by treating each neuron tree as a cluster. Since SGNN often delivers inconsistent cluster partitions owing to sensitivity relative to the input order of the training samples, GA is combined with SGNN to optimize and stabilize the clustering result. In the post-processing phase, the clusters are merged into lesion and background skin, yielding the segmented dermoscopy image. A series of experiments on the proposed model and the other automatic segmentation methods (including Otsu's thresholding method, k-means, fuzzy c-means (FCM) and statistical region merging (SRM)) reveals that the optimized model delivers better accuracy and segmentation results.

Malignant melanoma (MM), the most deadly form of skin cancer, is one of the most rapidly proliferating cancers in the world, with an estimated annual incidence of 70,230 and 8790 deaths in the United States in 2011 [1]. In China, the incidence of MM has increased 3%–8% annually and has doubled over the past decade [2]. The earlier the diagnosis, the lower the metastatic risk: investigations have shown that the cure rate is nearly 100% if the skin cancer is recognized early enough and treated surgically [3]. Advances in dermoscopy (skin-surface microscopy or dermatoscopy) technology have contributed significantly to improved detection and survival rates [4] and [5]. Dermoscopy [6] is a non-invasive technique that combines optical magnification and liquid immersion with angle-of-incidence lighting or crosspolarized lighting to make the contact area translucent, consequently revealing subsurface structures of the skin. Dermoscopy yields 10%–27% higher sensitivity than clinical diagnosis, significantly improving the accuracy of dermatologists when diagnosing melanoma [4] and [5]. Yet, dermoscopic diagnosis remains subjective and is therefore associated with poor reproducibility. Because of this there has been a significant increase in interest in the development of automatic digital dermatoscopic image analysis methods over the last decade. Such processes typically consist of four stages: image acquisition, lesion segmentation or border detection, feature extraction, and classification. The segmentation stage is quite important, since it affects the accuracy of the subsequent steps. However, segmentation is quite difficult because [7]: (i) the transition between the lesion and the surrounding skin is usually of low contrast; (ii) the lesion borders are usually irregular and fuzzy; (iii) complicating artifacts are often present such as skin texture, air bubbles and hairs; and (iv) the interior of the lesion may exhibit variegated coloring. To address these problems, a number of dermoscopic segmentation algorithms have been developed [8]. For convenience, we broadly classify these into three categories: thresholding, edge/contour-based and region-based. An effective thresholding method proposed by Grana et al. [9] uses Otsu's threshold to automatically segment the melanoma image, then selects kk points for spline-based interpolation, yielding a smoothed lesion border. Thresholding methods such as this can achieve good results when there is good contrast between lesion and skin, but encounter problems when the modes of the two regions overlap. Edge/contour-based approaches were used in [10] and [11]. Rubegni et al. [10] segmented dermoscopy images using the zero-crossings of a LoG edge operator, while Zhou et al. [11] used an improved snake model to detect lesion borders. Edge and contour-based approaches perform poorly when the boundaries are not well defined, for instance when the transition between skin and lesion is smooth. In such situations, the edges have gaps and the contour may leak through them. Region-based approaches have also been used. Some examples include multi-scale region growing [12], fuzzy c-means based on anisotropic mean shift [13], multi-resolution markov random fields [14] and statistical region merging (SRM) [7]. Region-based approaches have difficulties when the lesion or the skin region are textured, or have different colors present, which can lead to over-segmentation. With the increasing availability of methods for segmenting dermoscopic images of skin lesions, the relative performances of the various models are of interest. In [15], four widely used color clustering algorithms were compared: median cut, k-means, fuzzy c-means and mean shift, without employing any spatial constraint. The mean shift algorithm gave the best results. In [16], six methods were compared: gradient vector flow (GVF), a level set method of Chan (C-LS), adaptive thresholding (AT), adaptive snakes (AS), EM level sets (EM-LS), and a fuzzy-based split-and-merge algorithm (FBSM). The authors concluded that the best semi-supervised methods are AS and EM-LS, while the best fully automatic method is FBSM. Color is a significant feature for image segmentation and unsupervised color clustering has been successfully used for region-based segmentation [17]. Such data-driven methods have great potential for dealing with varied imaging situations, provided that an accurate model that is flexible enough to span the space of possible lesion image environments can be found. Since modeling such a high-dimensional complex space of possibilities is quite difficult, learning-based methods that can be trained on large datasets are of interest. Towards this end, we study and develop a color clustering model for dermoscopic images that combines the technique of the self-generating neural network (SGNN) [18] with genetic algorithms (GA). Using a measure of cluster validity, the clustering algorithm that we develop automatically determines an appropriate number of clusters. By merging the clustering regions into lesion and background skin, segmentation of dermoscopic images is achieved. When compared with other segmentation algorithms that use Otsu's thresholding method, k-means, fuzzy c-means and SRM, our model is shown to deliver high-quality segmentation results.

We developed a model for the automatic segmentation of dermoscopic images based on a combination of SGNN and GA. SGNN is a competitive learning neural network which features simplicity in network design, fast learning and automatic organization capability. However, conventional SGNN is sensitive to the input order of the training samples, often delivering inconsistent cluster partitions. To optimize the clustering result GA is combined with SGNN in our model. SGNN is generalized from SGNT to SGNF, then a group of optimal seed samples is selected by GA. These seeds are used by SGNN to generate an optimal clustering partitioning of the dermoscopy images. The clustering regions can be used to analyze the color and texture of lesions; and they can also be used to extract the lesion border, which is important for skin cancer diagnosis. The post-processing in our model entails merging the clustered regions into background skin and lesion objects, yielding a complete segmentation from which the border can be extracted. The overall ASegment-GA-SGNN model conducts an automatic and complete segmentation without manual interaction, and delivers more accurate segmentations as compared with other automatic methods. Because of the complexity of skin lesions, it is difficult to obtain a priori information about the number of clusters in dermoscopy images. In the clustering phase, the SD validity index is used to automatically determine the number of clusters. Although the SD index is quite adaptable compared with two other popular indices, the error can still be large (25.6%for the caucasian and 23.2% for xanthous in our experiments). Clearly, more research is needed towards developing better cluster validity indices for dermoscopy images.