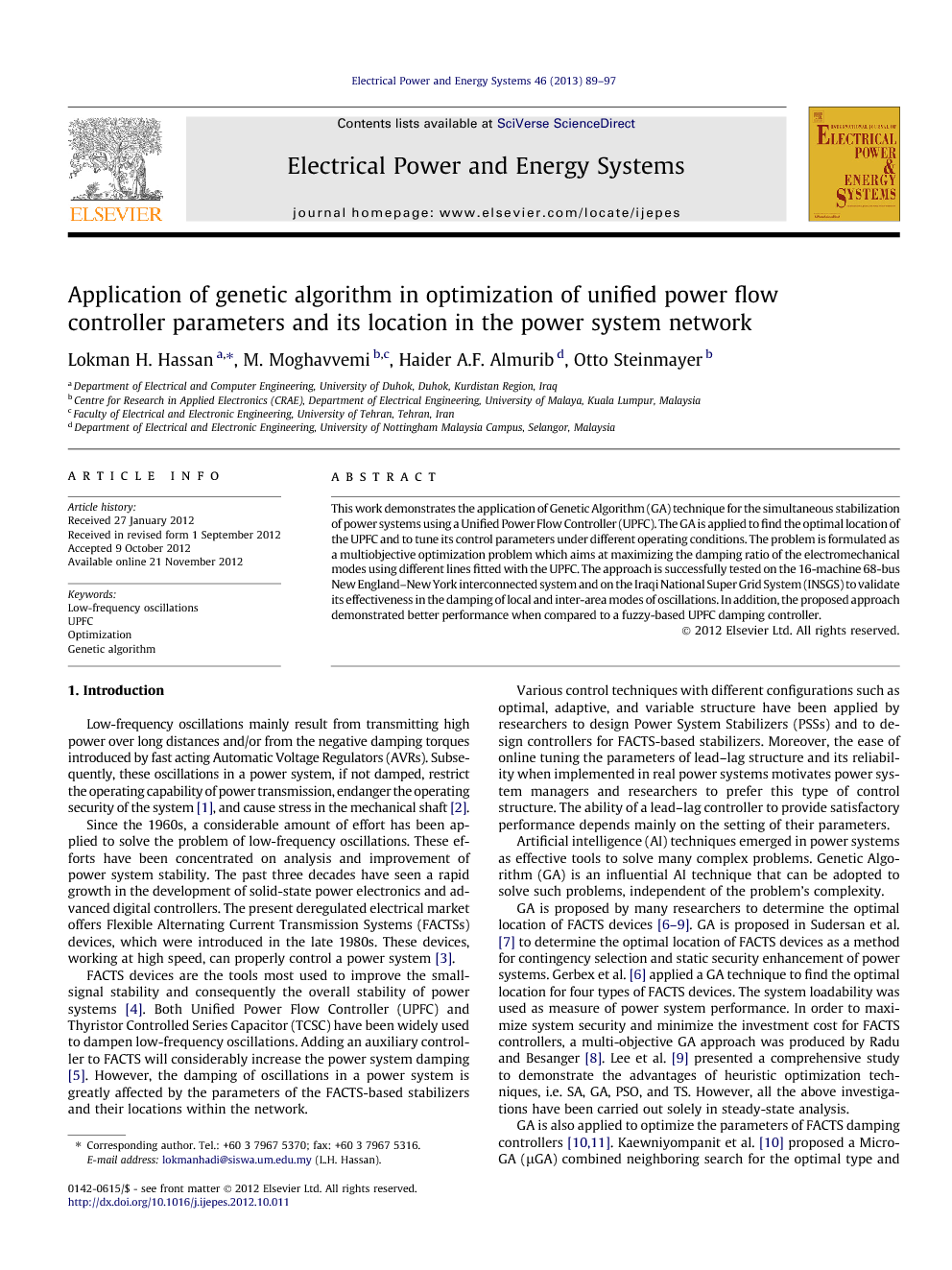 This work demonstrates the application of Genetic Algorithm (GA) technique for the simultaneous stabilization of power systems using a Unified Power Flow Controller (UPFC). The GA is applied to find the optimal location of the UPFC and to tune its control parameters under different operating conditions. The problem is formulated as a multiobjective optimization problem which aims at maximizing the damping ratio of the electromechanical modes using different lines fitted with the UPFC. The approach is successfully tested on the 16-machine 68-bus New England–New York interconnected system and on the Iraqi National Super Grid System (INSGS) to validate its effectiveness in the damping of local and inter-area modes of oscillations. In addition, the proposed approach demonstrated better performance when compared to a fuzzy-based UPFC damping controller.

Low-frequency oscillations mainly result from transmitting high power over long distances and/or from the negative damping torques introduced by fast acting Automatic Voltage Regulators (AVRs). Subsequently, these oscillations in a power system, if not damped, restrict the operating capability of power transmission, endanger the operating security of the system [1], and cause stress in the mechanical shaft [2]. Since the 1960s, a considerable amount of effort has been applied to solve the problem of low-frequency oscillations. These efforts have been concentrated on analysis and improvement of power system stability. The past three decades have seen a rapid growth in the development of solid-state power electronics and advanced digital controllers. The present deregulated electrical market offers Flexible Alternating Current Transmission Systems (FACTSs) devices, which were introduced in the late 1980s. These devices, working at high speed, can properly control a power system [3]. FACTS devices are the tools most used to improve the small-signal stability and consequently the overall stability of power systems [4]. Both Unified Power Flow Controller (UPFC) and Thyristor Controlled Series Capacitor (TCSC) have been widely used to dampen low-frequency oscillations. Adding an auxiliary controller to FACTS will considerably increase the power system damping [5]. However, the damping of oscillations in a power system is greatly affected by the parameters of the FACTS-based stabilizers and their locations within the network. Various control techniques with different configurations such as optimal, adaptive, and variable structure have been applied by researchers to design Power System Stabilizers (PSSs) and to design controllers for FACTS-based stabilizers. Moreover, the ease of online tuning the parameters of lead–lag structure and its reliability when implemented in real power systems motivates power system managers and researchers to prefer this type of control structure. The ability of a lead–lag controller to provide satisfactory performance depends mainly on the setting of their parameters. Artificial intelligence (AI) techniques emerged in power systems as effective tools to solve many complex problems. Genetic Algorithm (GA) is an influential AI technique that can be adopted to solve such problems, independent of the problem’s complexity. GA is proposed by many researchers to determine the optimal location of FACTS devices [6], [7], [8] and [9]. GA is proposed in Sudersan et al. [7] to determine the optimal location of FACTS devices as a method for contingency selection and static security enhancement of power systems. Gerbex et al. [6] applied a GA technique to find the optimal location for four types of FACTS devices. The system loadability was used as measure of power system performance. In order to maximize system security and minimize the investment cost for FACTS controllers, a multi-objective GA approach was produced by Radu and Besanger [8]. Lee et al. [9] presented a comprehensive study to demonstrate the advantages of heuristic optimization techniques, i.e. SA, GA, PSO, and TS. However, all the above investigations have been carried out solely in steady-state analysis. GA is also applied to optimize the parameters of FACTS damping controllers [10] and [11]. Kaewniyompanit et al. [10] proposed a Micro-GA (μGA) combined neighboring search for the optimal type and placement of FACTS devices. Small signal analysis was used to find the fitness function. However, this approach was tested only on a three-machine nine-bus system, a simplified general model was used to represent FACTS devices, and a high number of generations was used as a stop criterion. In addition, shunt-series configuration is not considered in the design of the FACTS. Hence, they (including devices such as UPFC) can independently and simultaneously control both the real and reactive power flow in the transmission line [12] and [13]. As for Mok et al. [11], GA was used for optimizing only the parameters of UPFC damping controller. To avoid the other drawbacks of the approach proposed by Kaewniyompanit et al. [10], the flux-decay model, which has been widely applied to study low-frequency oscillations, is utilized for the modeling of a UPFC-based stabilizer into power systems. In order to improve the approach proposed by Mok et al. [11], GA is applied in this paper to both design an optimal UPFC-based stabilizer and determine its optimal location under different operating conditions simultaneously. With this optimal design, system damping can be improved considerably. A multiobjective function is adopted to formulate the problem whose solution aims to maximize the damping ratios of the electromechanical modes over a wide range of operating conditions. Each component of the function represents the system with the UPFC located on a different line. After optimization, the proposed technique is tested on the 16-machine and 68-bus New England–New York interconnected system and to the Iraqi National Super Grid System (INSGS). Eigenvalue analysis and nonlinear simulation results are used to prove the effectiveness of the approach in the damping of electromechanical oscillation modes (i.e. local and inter-area).

A method for determining simultaneously the optimal location of UPFC-based stabilizer and the optimal parameters of its controller using Genetic Algorithm (GA) at different operating conditions was presented in this paper. The problem was formulated as a multi-objective function to maximize the damping ratios of the oscillation modes using different lines fitted with the UPFC. The approach was applied to the 16-machine 68-bus New England–New York interconnected system and the Iraqi National Super Grid System (INSGS). The effectiveness of the proposed optimization algorithm in finding the optimal location of UPFC-based stabilizer with optimal parameters for its controller at the same time was established during Eigenvalue analysis and nonlinear simulation results.