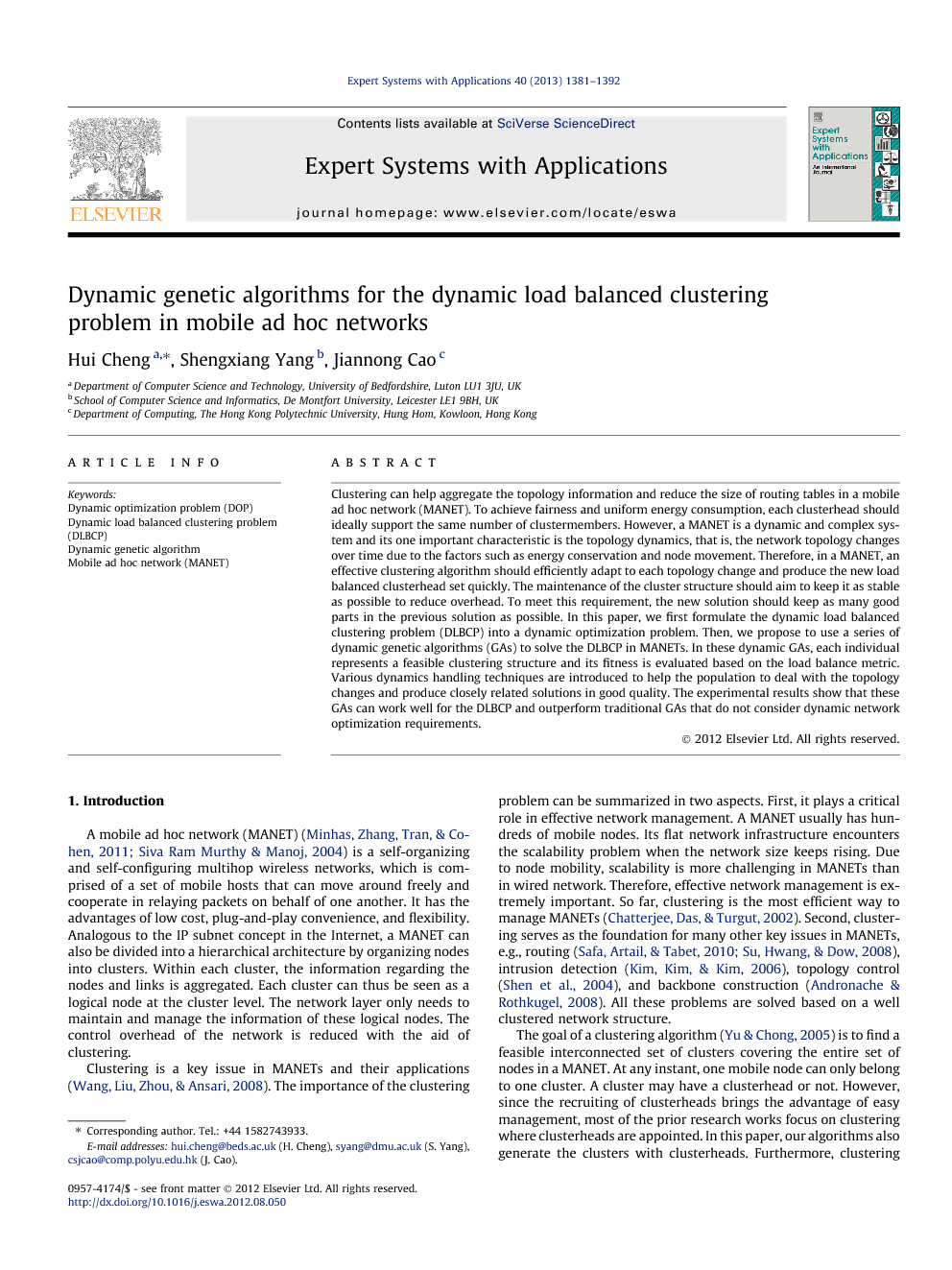 Clustering can help aggregate the topology information and reduce the size of routing tables in a mobile ad hoc network (MANET). To achieve fairness and uniform energy consumption, each clusterhead should ideally support the same number of clustermembers. However, a MANET is a dynamic and complex system and its one important characteristic is the topology dynamics, that is, the network topology changes over time due to the factors such as energy conservation and node movement. Therefore, in a MANET, an effective clustering algorithm should efficiently adapt to each topology change and produce the new load balanced clusterhead set quickly. The maintenance of the cluster structure should aim to keep it as stable as possible to reduce overhead. To meet this requirement, the new solution should keep as many good parts in the previous solution as possible. In this paper, we first formulate the dynamic load balanced clustering problem (DLBCP) into a dynamic optimization problem. Then, we propose to use a series of dynamic genetic algorithms (GAs) to solve the DLBCP in MANETs. In these dynamic GAs, each individual represents a feasible clustering structure and its fitness is evaluated based on the load balance metric. Various dynamics handling techniques are introduced to help the population to deal with the topology changes and produce closely related solutions in good quality. The experimental results show that these GAs can work well for the DLBCP and outperform traditional GAs that do not consider dynamic network optimization requirements.

A MANET is a self-organizing and self-configuring multihop wireless network, which has a wide usage nowadays. The clustering problem in MANETs aims to organize the network into a hierarchy structure, i.e., dividing the nodes into different clusters. In each cluster, a node acting as the clusterhead will serve all the other clustermembers as a local coordinator. A fair cluster structure requires that each clusterhead serves the same number of clustermembers, thereby achieving the load balance. This problem has been addressed in MANETs. However, previous works do not pay much attention to the continuous topology changes, which are actually the inherent characteristics of MANETs. Intuitively, it is much more challenging to deal with the dynamic clustering problem in a continuously changing network than to solve the quasi-static one in a quasi-static infrastructure, where only local small modifications are introduced after clustering. In recent years, there has been a growing interest in studying GAs for DOPs. Typical approaches to enhancing the performance of GAs for DOPs include the immigrants schemes, memory schemes, multi-population schemes, and their combinations. In this paper, we term the GAs based on these schemes as dynamic GAs. We develop seven dynamic GAs to solve the DLBCP in a large scale MANET. The GA components for the clustering problem are also specifically designed. To encourage the load balance, we use the standard deviation of clusterhead degrees to evaluate the performance of the clustering results. For comparison purposes, we also implement two traditional GAs and one common non-GA technique. Simulation experiments show that these dynamic GAs are powerful techniques for solving the DLBCP while the traditional GAs cannot deal with the practical DLBCP. The non-GA technique also shows much worse performance than dynamic GAs. Remarkably, EIGA and MEGA outperform other dynamic GAs significantly for the DLBCP tested in this paper. In summary, the major contributions of this paper are as follows. First, a novel general model of dynamic network optimization problem is developed. The DLBCP model has captured the fundamental characteristics of MANETs, i.e., the topology changes in a continuous way. The load balance metric is also accurately formulated. This model could be used by a wide range of AI methods, e.g., ant colony optimization, and artificial immune algorithm. Second, dynamic GAs are developed and it has been shown that they are capable of providing good solutions for the DLBCP. How to solve the DLBCP is an important and challenging problem. By considering the domain knowledge of network clustering, we develop a few dynamics handling schemes and incorporate them into GAs to form the dynamic GAs. This is a novel way to solve the DLBCP and has been proved successful. The efficiency and effectiveness of dynamic GAs have also been verified in practical problem solving. Our work can inspire other researchers to utilize dynamic GAs to solve other DOPs in practice. Third, dynamic network environment and dynamic test environment are constructed. They play important roles in solving dynamic network optimization problems. Our network environment and test environment consider the features of network dynamics and represent them by adjustable parameters. The parameters can be tailored for simulating specific dynamic networks. Therefore, they can be widely used and benefit other research works. We believe that this is the first work to investigate the efficiency and effectiveness of GAs for solving the DLBCP in the real-world wireless networks, i.e., MANETs. Although all the experiment results and analysis are based on simulated environments, the research provides useful guidelines for deploying the methods in a real situation. In our dynamic GAs, the node degree and the number of clustermembers are used for calculating the fitness. In a real situation, these parameters are still the same as in simulated environment and will not be affected by other environmental factors. Therefore, all the algorithms will show similar performance even in real situations. However, slight overall performance degradation should be expected due to the possible inference in topology collection. Since the practical clustering problem may have more than one clustering metrics, one interesting future work will be to investigate GAs for solving dynamic multi-metric clustering problem in MANETs.