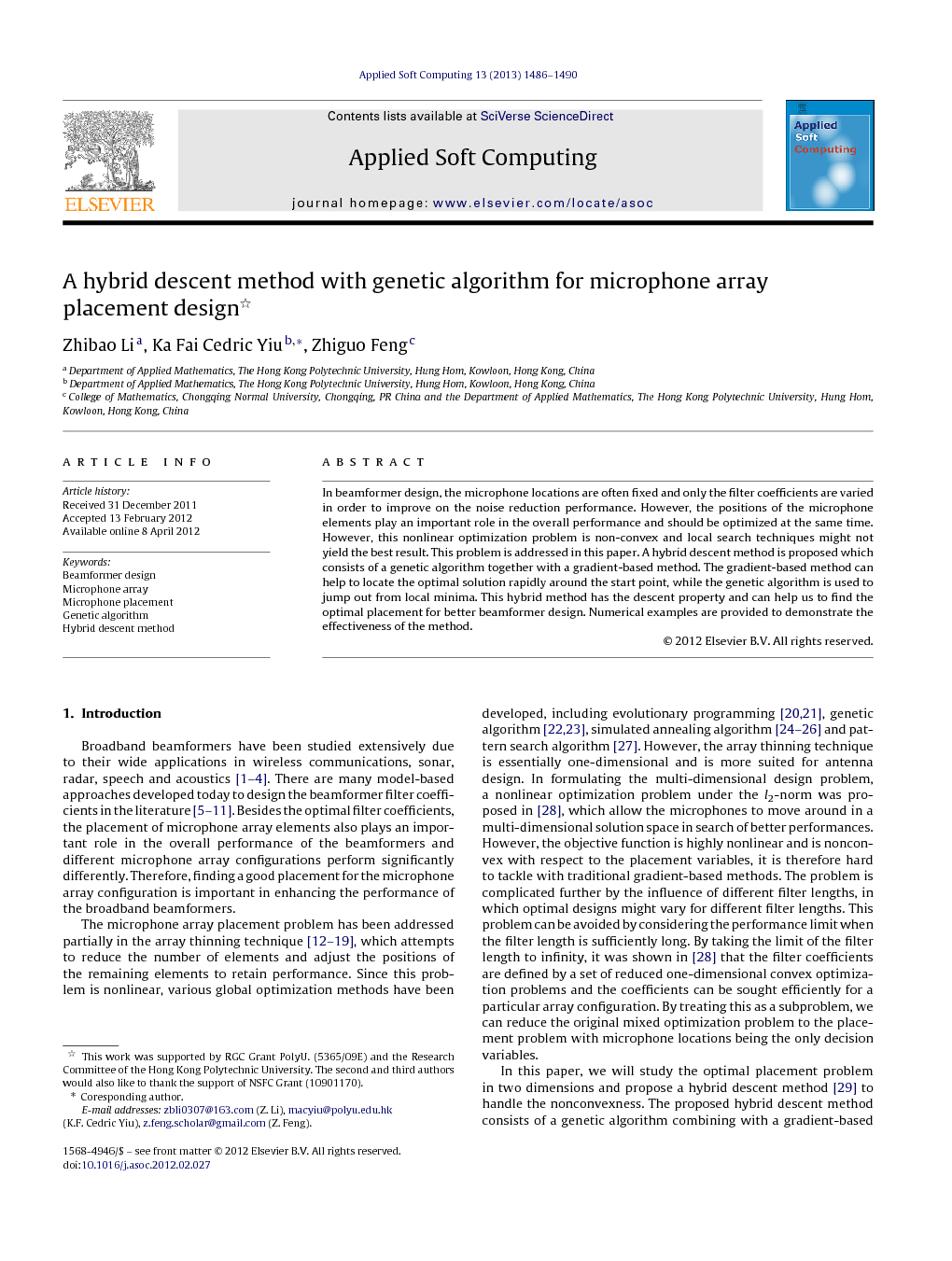 In beamformer design, the microphone locations are often fixed and only the filter coefficients are varied in order to improve on the noise reduction performance. However, the positions of the microphone elements play an important role in the overall performance and should be optimized at the same time. However, this nonlinear optimization problem is non-convex and local search techniques might not yield the best result. This problem is addressed in this paper. A hybrid descent method is proposed which consists of a genetic algorithm together with a gradient-based method. The gradient-based method can help to locate the optimal solution rapidly around the start point, while the genetic algorithm is used to jump out from local minima. This hybrid method has the descent property and can help us to find the optimal placement for better beamformer design. Numerical examples are provided to demonstrate the effectiveness of the method.

Broadband beamformers have been studied extensively due to their wide applications in wireless communications, sonar, radar, speech and acoustics [1], [2], [3] and [4]. There are many model-based approaches developed today to design the beamformer filter coefficients in the literature [5], [6], [7], [8], [9], [10] and [11]. Besides the optimal filter coefficients, the placement of microphone array elements also plays an important role in the overall performance of the beamformers and different microphone array configurations perform significantly differently. Therefore, finding a good placement for the microphone array configuration is important in enhancing the performance of the broadband beamformers. The microphone array placement problem has been addressed partially in the array thinning technique [12], [13], [14], [15], [16], [17], [18] and [19], which attempts to reduce the number of elements and adjust the positions of the remaining elements to retain performance. Since this problem is nonlinear, various global optimization methods have been developed, including evolutionary programming [20] and [21], genetic algorithm [22] and [23], simulated annealing algorithm [24], [25] and [26] and pattern search algorithm [27]. However, the array thinning technique is essentially one-dimensional and is more suited for antenna design. In formulating the multi-dimensional design problem, a nonlinear optimization problem under the l2-norm was proposed in [28], which allow the microphones to move around in a multi-dimensional solution space in search of better performances. However, the objective function is highly nonlinear and is nonconvex with respect to the placement variables, it is therefore hard to tackle with traditional gradient-based methods. The problem is complicated further by the influence of different filter lengths, in which optimal designs might vary for different filter lengths. This problem can be avoided by considering the performance limit when the filter length is sufficiently long. By taking the limit of the filter length to infinity, it was shown in [28] that the filter coefficients are defined by a set of reduced one-dimensional convex optimization problems and the coefficients can be sought efficiently for a particular array configuration. By treating this as a subproblem, we can reduce the original mixed optimization problem to the placement problem with microphone locations being the only decision variables. In this paper, we will study the optimal placement problem in two dimensions and propose a hybrid descent method [29] to handle the nonconvexness. The proposed hybrid descent method consists of a genetic algorithm combining with a gradient-based method. The literature in genetic algorithm is vast and it has been employed for beamformer design recently [30] to enhance speech recognition accuracy. Since the formulated nonlinear optimization problem will have many local minima, we employ the genetic algorithm here to generate the new feasible solutions in order to jump out from the local minima while retaining previous useful information. Once a descent point is identified, the gradient-based method is executed to descend to the nearest local minimum rapidly. This method has a nice descent property and the objective function is improved monotonically. Numerical experiments will be given to demonstrate that much better placements can be found. The rest of this paper is organized as follows. In Section 2, we formulate the placement problem and discuss the performance limit of the filter length. In Section 3, we propose the hybrid descent method with a genetic algorithm for solving the placement problem. A two-dimensional numerical example will be used to demonstrate the proposed method and the performance of the designed beamformer will be given and compared in Section 4.

In this paper, the microphone array placement problem for broadband beamformer design has been studied. Due to the nonconvex property of the placement optimization problem, a hybrid descent method has been proposed. The hybrid descent method employs a gradient-based technique for local neighbourhood improvement and a genetic algorithm to escape from local minima. Numerical examples have demonstrated the proposed hybrid descent method can design better beamformers by comparing with other standard configurations. As a future extension, it is of interest to investigate similar mechanisms of integrating the gradient-based method with the particle swarm optimization algorithm [36]. Also, higher dimensional design of beamformers could also be considered.