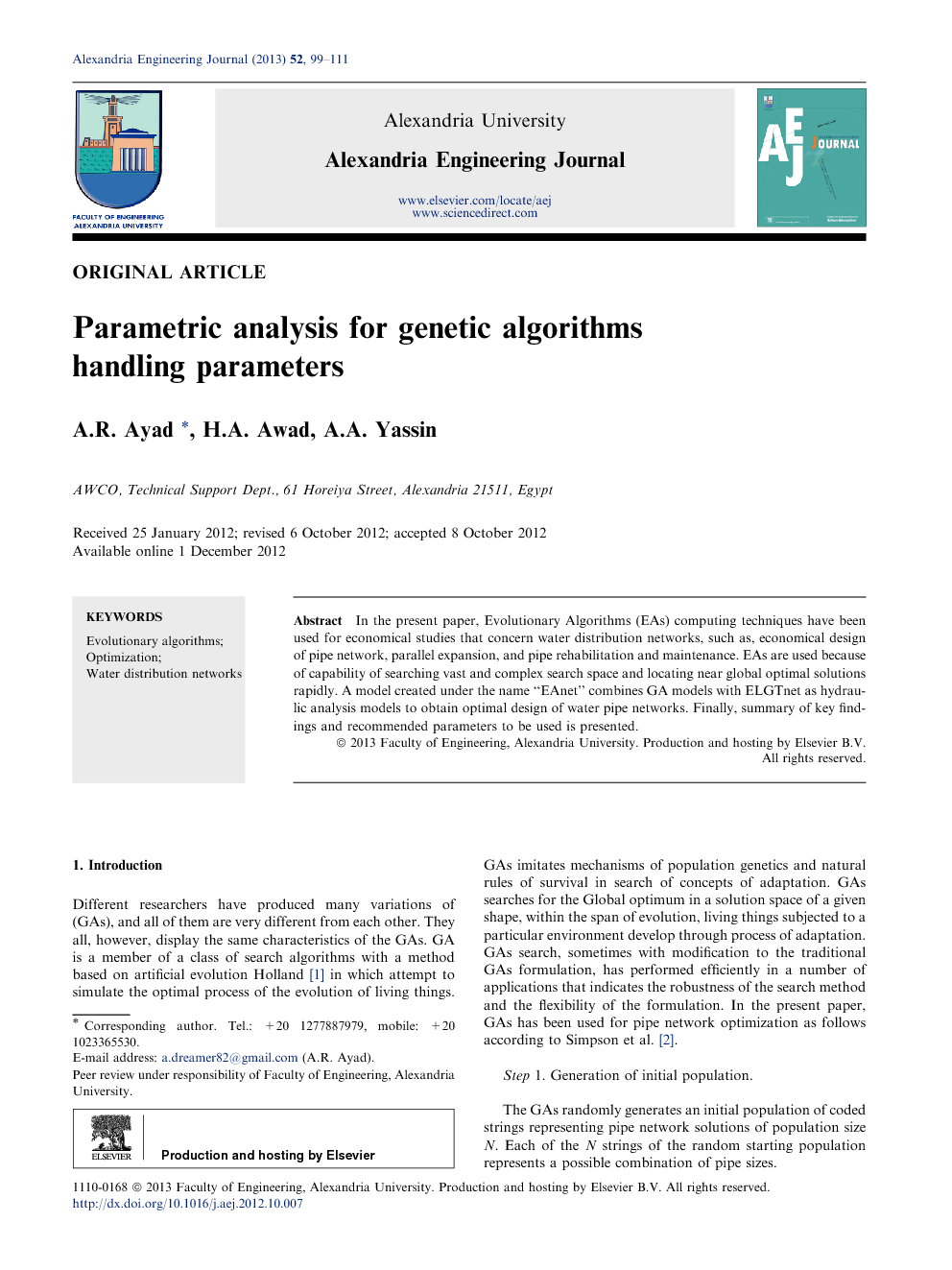 In the present paper, Evolutionary Algorithms (EAs) computing techniques have been used for economical studies that concern water distribution networks, such as, economical design of pipe network, parallel expansion, and pipe rehabilitation and maintenance. EAs are used because of capability of searching vast and complex search space and locating near global optimal solutions rapidly. A model created under the name “EAnet” combines GA models with ELGTnet as hydraulic analysis models to obtain optimal design of water pipe networks. Finally, summary of key findings and recommended parameters to be used is presented.

Different researchers have produced many variations of (GAs), and all of them are very different from each other. They all, however, display the same characteristics of the GAs. GA is a member of a class of search algorithms with a method based on artificial evolution Holland [1] in which attempt to simulate the optimal process of the evolution of living things. GAs imitates mechanisms of population genetics and natural rules of survival in search of concepts of adaptation. GAs searches for the Global optimum in a solution space of a given shape, within the span of evolution, living things subjected to a particular environment develop through process of adaptation. GAs search, sometimes with modification to the traditional GAs formulation, has performed efficiently in a number of applications that indicates the robustness of the search method and the flexibility of the formulation. In the present paper, GAs has been used for pipe network optimization as follows according to Simpson et al. [2]. Step 1. Generation of initial population. The GAs randomly generates an initial population of coded strings representing pipe network solutions of population size N. Each of the N strings of the random starting population represents a possible combination of pipe sizes. Step 2. Computation of network cost. The GAs considers each of the N strings in the population in turn. It decodes each substring into the corresponding pipe size and computes the total cost. Step 3. Hydraulic analysis of each network. A steady state hydraulic network solver computes the heads and discharges for each of the network designs in the population. Step 4. Computation of penalty cost. The GA assigns a penalty cost for each demand pattern if a pipe network design does not satisfy the minimum pressure constraints. Step 5. Computation of total network cost. The total cost of each network in the current population is taken as the sum of the network cost (Step 2) plus the penalty cost (Step 4). Step 6. Computation of the fitness. The fitness of the coded string is taken as some function of the total network cost. The GAs computes the fitness for each proposed pipe network in the current population as the inverse of the total network cost from Step 5. The use of the inverse was found to be the most effective in the GAs search. Step 7. Generation of a new population using the selection operator. GAs generates new members of the next generation by a selection scheme. The probabilities of selection for string i, (pi) to go into the next generation of N members using a proportionate selection method given by (Eq. (1)). equation(1) View the MathML sourcepi=fi∑J=1Nfi where fi is the fitness of string i (determined in Step 6), N = Population number (number of available solution per generation). Step 8. The crossover operator. Crossover is the partial exchange of bits between two parent strings to form two offspring strings. Crossover occurs with some specified probability of crossover Pc for each pair of parent strings selected in Step 7. Step 9. The mutation operator. Mutation children are generated by applying random changes to a single individual in the current generation to create a child. Step 10. Production of successive generations. The use of the three operators described above produces a new generation of pipe network designs using Steps 2–9. The GA repeats the process to generate successive generations. A number of best cost strings are stored and updated as cheaper cost alternatives. Fig. 1 shows a flow chart of GAs procedures

Evolutionary Algorithms “EAs” describe a class of techniques that closely mimic the evolutionary process in nature. A principle difference between optimization using an evolutionary algorithm Vs more traditional methods is that in an evolutionary algorithm, an entire population of potential solutions searches the solution space (as opposed to a point-by-point search). The “EA-NET” uses evolutionary algorithms for the least-cost and expansion of water distribution network. The model was tested with several problems from the literate, obtaining near-optimal solutions in relatively few iterations with the aid of newly introduced adaptive constraint handling functions that requires no pre tuning or pre feasible solution. Thus is most suitable in real water distribution networks. The key findings for the parametric analysis are as follows. Firstly, for representation code is clear that using real coding produce best values and in least number of function evaluations. While, for initial seed number there no clear selection for a specific seed number could be made as it differ by the changing of parameters and network size. The recommendation is to apply different seed numbers for same parameters to reach results that are more refined. As for crossover rate it is recommended use a guiding value from 0.7 to 0.9. meanwhile, as for mutation rate it was noticed that reaching optimal solution could occur using both ascending or descending mutation techniques depending on population diversity as it is noticed that increasing the diversity of population along with using a suitable fitness scaling technique that do not allow a gene to dominate the population (e.g., shift linear fitness scaling) is best, while in case of decreasing mutation rate it is advised to used a fitness scaling scale that identify the small differences between individuals (e.g., proportional fitness scaling). In crossover functions It is clearly advised that when using a real representation to use crossover function that is based on such representation such as (e.g., arithmetic, heuristic) to obtain optimal values in least number of evaluations. While, in mutation Function it is concluded that, single mutation functions such as (e.g., invert, swap, etc.) do not apply well in design functions as they only shuffle or switch genome positions rather than introducing new genomes to solution space that limits the ability of exploration, yet they seem more affective in other types of functions (such as travelling salesman, best route, and network calibration). Bitwise mutation reaches the optimal solution and outperforms most of other mutation function, yet it needs to be internally tuned by adjusting an appropriate mutation rate. As for fitness scaling function its is noticed that shift linear fitness scaling appear to be the best fitness scaling function as it scales the raw scores so that the expectation of the fittest individual is equal to a constant multiplied by the average score so no dominance of a certain parent occur although it require a relatively large population to operate well. In the selection function parameter, it is recommended to use tournament function. In most networks and benchmarks applied, the value of number of players (2–4) was found suitable to start with. It was found that when increasing the population size it is better to increase the number of player at Tournament function. While, for population size it was found that the least suitable population size equals to number of parameters to be optimized, yet it is advised to set the minimum population size to twice the parameter size especially if it is less than 50. For the penalty function the newly adaptive penalty function suggested seems to outperform other penalty functions as it converge faster to optimal results and even posses a less standard deviation score which indicate its less reliance to initial seed number, requires no parameter tuning and can be used with any evolutionary algorithm, thus near-optimum solution with considerably less computational effort can be found. Finally, it can be concluded that single crossover offers a better chance of reproduction especially for more fitted individuals thus increasing the chance of finding better individuals.