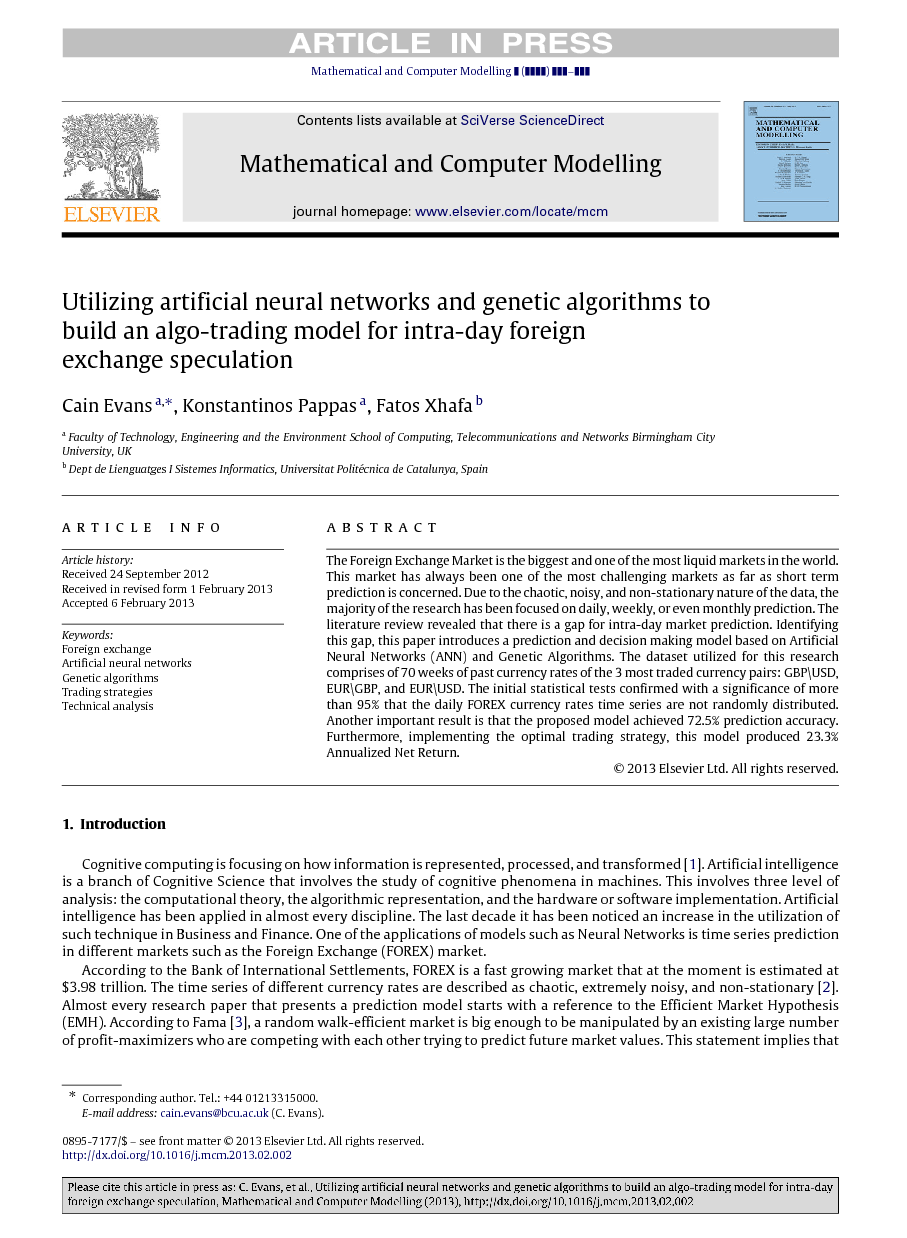 The Foreign Exchange Market is the biggest and one of the most liquid markets in the world. This market has always been one of the most challenging markets as far as short term prediction is concerned. Due to the chaotic, noisy, and non-stationary nature of the data, the majority of the research has been focused on daily, weekly, or even monthly prediction. The literature review revealed that there is a gap for intra-day market prediction. Identifying this gap, this paper introduces a prediction and decision making model based on Artificial Neural Networks (ANN) and Genetic Algorithms. The dataset utilized for this research comprises of 70 weeks of past currency rates of the 3 most traded currency pairs: GBP∖USD, EUR∖GBP, and EUR∖USD. The initial statistical tests confirmed with a significance of more than 95% that the daily FOREX currency rates time series are not randomly distributed. Another important result is that the proposed model achieved 72.5% prediction accuracy. Furthermore, implementing the optimal trading strategy, this model produced 23.3% Annualized Net Return.

Cognitive computing is focusing on how information is represented, processed, and transformed [1]. Artificial intelligence is a branch of Cognitive Science that involves the study of cognitive phenomena in machines. This involves three level of analysis: the computational theory, the algorithmic representation, and the hardware or software implementation. Artificial intelligence has been applied in almost every discipline. The last decade it has been noticed an increase in the utilization of such technique in Business and Finance. One of the applications of models such as Neural Networks is time series prediction in different markets such as the Foreign Exchange (FOREX) market. According to the Bank of International Settlements, FOREX is a fast growing market that at the moment is estimated at $3.98 trillion. The time series of different currency rates are described as chaotic, extremely noisy, and non-stationary [2]. Almost every research paper that presents a prediction model starts with a reference to the Efficient Market Hypothesis (EMH). According to Fama [3], a random walk-efficient market is big enough to be manipulated by an existing large number of profit-maximizers who are competing with each other trying to predict future market values. This statement implies that the price of an asset reflects all the information that can be obtained at that time and that due to conflicting incentives of the participants the price will reach its equilibrium despite temporal disturbances due to market noise. While the theory seems to be correct for the time it was published, with the passing of time and due to future developments, especially in the area of communication and its impact on a globalized market, there is always the possibility that some areas or instances of the markets may be inefficient. Today the world is highly interconnected and it takes a fraction of a second to transmit financial news around the globe. The reaction by the markets to market news tends to have an impact on the financial time series. The sequence of those reactions creates patterns that some practitioners believe that, as history repeats itself, so the market reaction does [4]. For instance, Azzof [5] provided evidence that there are cases where markets appear to be inefficient. Furthermore, Scabar [6] developed a hybrid prediction model based on an ANN and a Genetic Algorithm (GA) which gives evidence that financial time series are not entirely random. Future market forecasting techniques can be classified into two major categories: fundamental analysis, and technical analysis. Fundamental analysis is based on macro-economic data such as Purchasing Power Parity (PPP), Gross Domestic Product (GDP), Balance of Payments (BOP), Purchasing Manager Index (PMI), Central Bank outcomes, etc. It is obvious that this kind of analysis has a more long term prediction spectrum and it is not the case for this paper. On the other hand, technical analysis focuses on past data and potential repeated patterns within those data. The major point here is that the history tends to repeat itself. As opposed to fundamental analysis, technical analysis makes short term predictions such as weekly, daily, or even hourly predictions. There is a conglomeration of available tools suitable for technical analysis such as ANN, GA, Genetic Programming (GP), Econometrics tools, technical indicators, etc. Hirabayashi [7] introduces a forecasting optimization model that is based on a genetic algorithm that automatically generates trading rules based on technical indexes such as Moving Average (MA), and Relative Strength Index (RSI). Tulson [8] utilizes wavelet analysis to feed an ANN that predicts FTSE 100 index time series. Butler [9] developed an Evolutionary ANN (EANN) that makes future predictions based on macro-economic data. Tay [10] proposes a Support Vector Machine (SVM) regression approximation model. The literature has revealed that there are cases where the combination of two or more techniques offers a better result. Yu [11] introduced an online learning algorithm to accelerate the learning process of the neural network. The results revealed that the algorithm outperformed other algorithms such as batch learning and Levenberg–Marquardt algorithm. Yao [12] use MA5, MA10, MA20, MA60, and MA120 to feed a Feed Forward Neural Network that forecasts several currency rates. The weekly based results are evaluated as positive. Selecting the proper tool depend on many factors, such as the nature of data and the adopted methodology. Econometrics tools seem to have an adequate performance when data exhibit linear dependency as opposed when data are non-linearly correlated. On the other hand, neural networks provide generalization and mathematical function approximation to reveal or associate relations between input and target data in the case of supervised learning [13]. The main purpose of this paper is to confirm the hypothesis that intra-day FX market prediction is possible. To achieve this goal, four basic objectives should be satisfied. The first objective is to define the trading strategies and to develop the algorithms that Implements those strategies. The second goal is to detect instances of the market that show an inefficient behaviour. The third goal is to develop the forecasting model based on ANN and GA and the last objective is to test the developed model and evaluate the performance of the introduced trading strategies. The remainder of the paper has the following structure. Section 2 presents the materials and the methods that formulate this research. It is separated into two main parts namely the trading strategy and the forecasting model. Section 3 presents the results of the data analysis as well as the performance of the forecasting model. Finally, Section 4 concludes the paper and presents some future work.

The main purpose of this paper was to introduce a prediction and decision making model that produces profitable intra-day FOREX transactions. The paper has shown that, despite the highly noisy nature of the tick FOREX data, proper analysis and pre-processing can identify repeatable patterns that provide a source for developing a forecasting model. The developed forecasting model is based on Feed Forward Neural Networks with Back-Propagation architecture. Furthermore, a GA was developed to search for the optimal network topology. Several experiments identified the topology 20-9-8-1 as the one that provides the network with better approximation and generalization. Additionally, the proposed trading strategies were able to produce a promising annualized net profit of 23.3% which makes FOREX algorithmic trading an appealing choice. It is important though to mention that in general, the developed financial markets are efficient due to the fact that the large number of participants as well as the huge number of transactions tend to push the prices towards their equilibrium. However, although the overall market seems to be efficient at least to its semi-strong form, this particular research, as well as other research mentioned throughout this paper has shown that even in mature and well developed financial markets there are pockets of inefficiencies that can be exploited. Furthermore, once those inefficiencies have been identified, and the deployed methodology is being made available publicly, those pockets of inefficiencies will cease to exist as the exploitation of those inefficiencies will push the prices towards their equilibrium. Last but not least, Back-propagation is a well implemented technique that has dominated the prediction models over the previous many years. Since the introduction by Vapnik in 1995, many argue that Support Vector Machines (SVM) are more robust and tend to provide more accurate models. Considering the market prediction problem as a classification problem where the question is whether the market goes up or down, an interesting question is what the performance of SVM would be in comparison with a back-propagation model both operating in a highly noisy data environment such as the FX market.