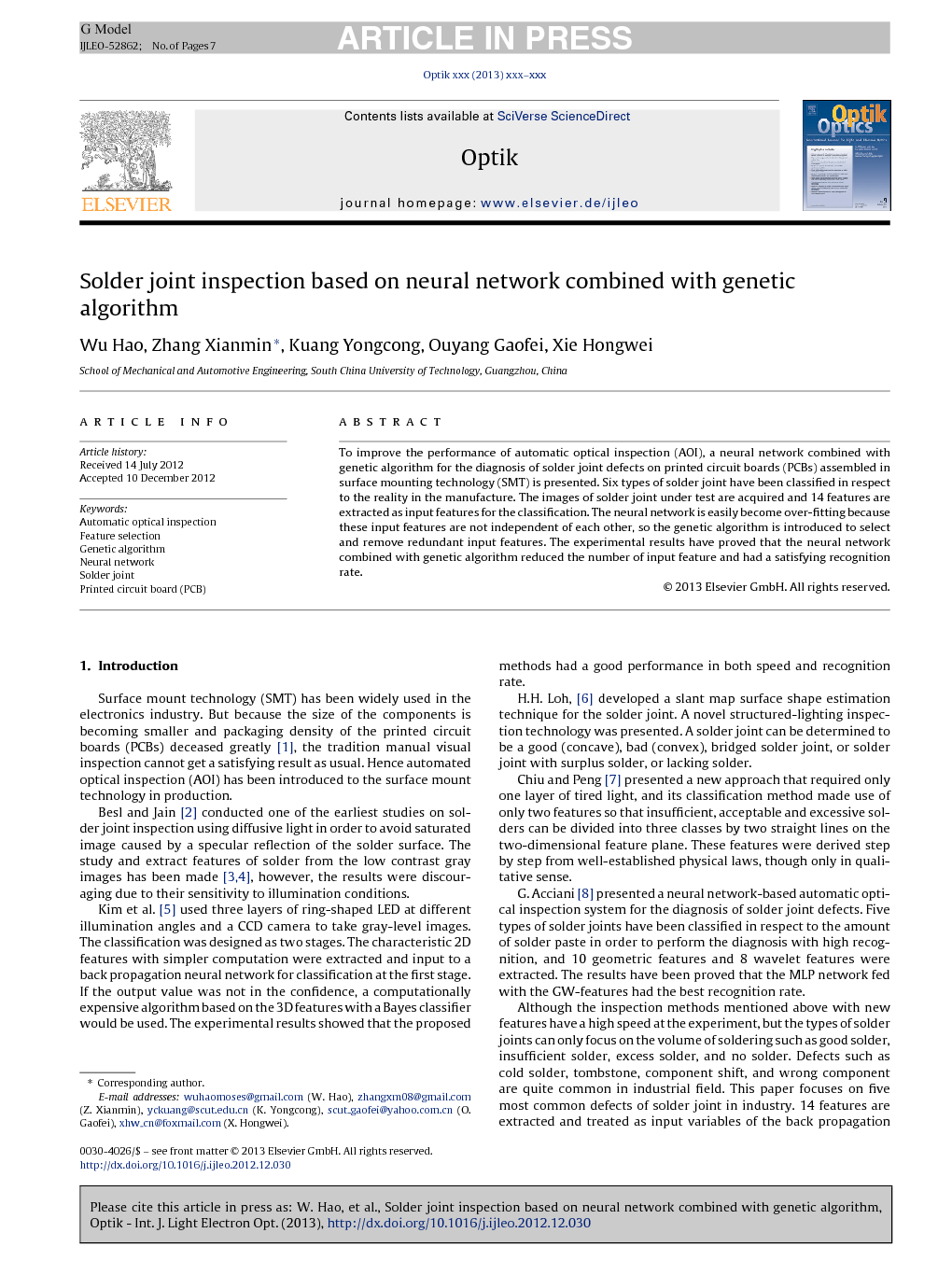 Surface mount technology (SMT) has been widely used in the electronics industry. But because the size of the components is becoming smaller and packaging density of the printed circuit boards (PCBs) deceased greatly [1], the tradition manual visual inspection cannot get a satisfying result as usual. Hence automated optical inspection (AOI) has been introduced to the surface mount technology in production. Besl and Jain [2] conducted one of the earliest studies on solder joint inspection using diffusive light in order to avoid saturated image caused by a specular reflection of the solder surface. The study and extract features of solder from the low contrast gray images has been made [3] and [4], however, the results were discouraging due to their sensitivity to illumination conditions. Kim et al. [5] used three layers of ring-shaped LED at different illumination angles and a CCD camera to take gray-level images. The classification was designed as two stages. The characteristic 2D features with simpler computation were extracted and input to a back propagation neural network for classification at the first stage. If the output value was not in the confidence, a computationally expensive algorithm based on the 3D features with a Bayes classifier would be used. The experimental results showed that the proposed methods had a good performance in both speed and recognition rate. H.H. Loh, [6] developed a slant map surface shape estimation technique for the solder joint. A novel structured-lighting inspection technology was presented. A solder joint can be determined to be a good (concave), bad (convex), bridged solder joint, or solder joint with surplus solder, or lacking solder. Chiu and Peng [7] presented a new approach that required only one layer of tired light, and its classification method made use of only two features so that insufficient, acceptable and excessive solders can be divided into three classes by two straight lines on the two-dimensional feature plane. These features were derived step by step from well-established physical laws, though only in qualitative sense. G. Acciani [8] presented a neural network-based automatic optical inspection system for the diagnosis of solder joint defects. Five types of solder joints have been classified in respect to the amount of solder paste in order to perform the diagnosis with high recognition, and 10 geometric features and 8 wavelet features were extracted. The results have been proved that the MLP network fed with the GW-features had the best recognition rate. Although the inspection methods mentioned above with new features have a high speed at the experiment, but the types of solder joints can only focus on the volume of soldering such as good solder, insufficient solder, excess solder, and no solder. Defects such as cold solder, tombstone, component shift, and wrong component are quite common in industrial field. This paper focuses on five most common defects of solder joint in industry. 14 features are extracted and treated as input variables of the back propagation (BP) network in the beginning. Since these input variables are not independent to each other, the BP network easily becomes over-fitting, both the correct accuracy and modeling time cannot get a satisfying result, so the genetic algorithm is introduced to remove redundant input features. This paper is organized as following. In Section 2, the overall proposed method is described. In Section 3, the illumination system and the image of solder joint with different defects are presented. In Section 4, feature extraction, feature selection and the classification are described. Experimental results are obtained with the proposed method using a set of solder images in Section 5. Finally, the conclusions are made at the end of this paper.

In this paper, the AOI system for solder joint inspection on PCBs in SMT has been described. Solder joint defects are classified according to the inspection industry. Genetic algorithm is applied to select the optimal features. The experimental results show that the proposed method has a well performance on solder joint classification.