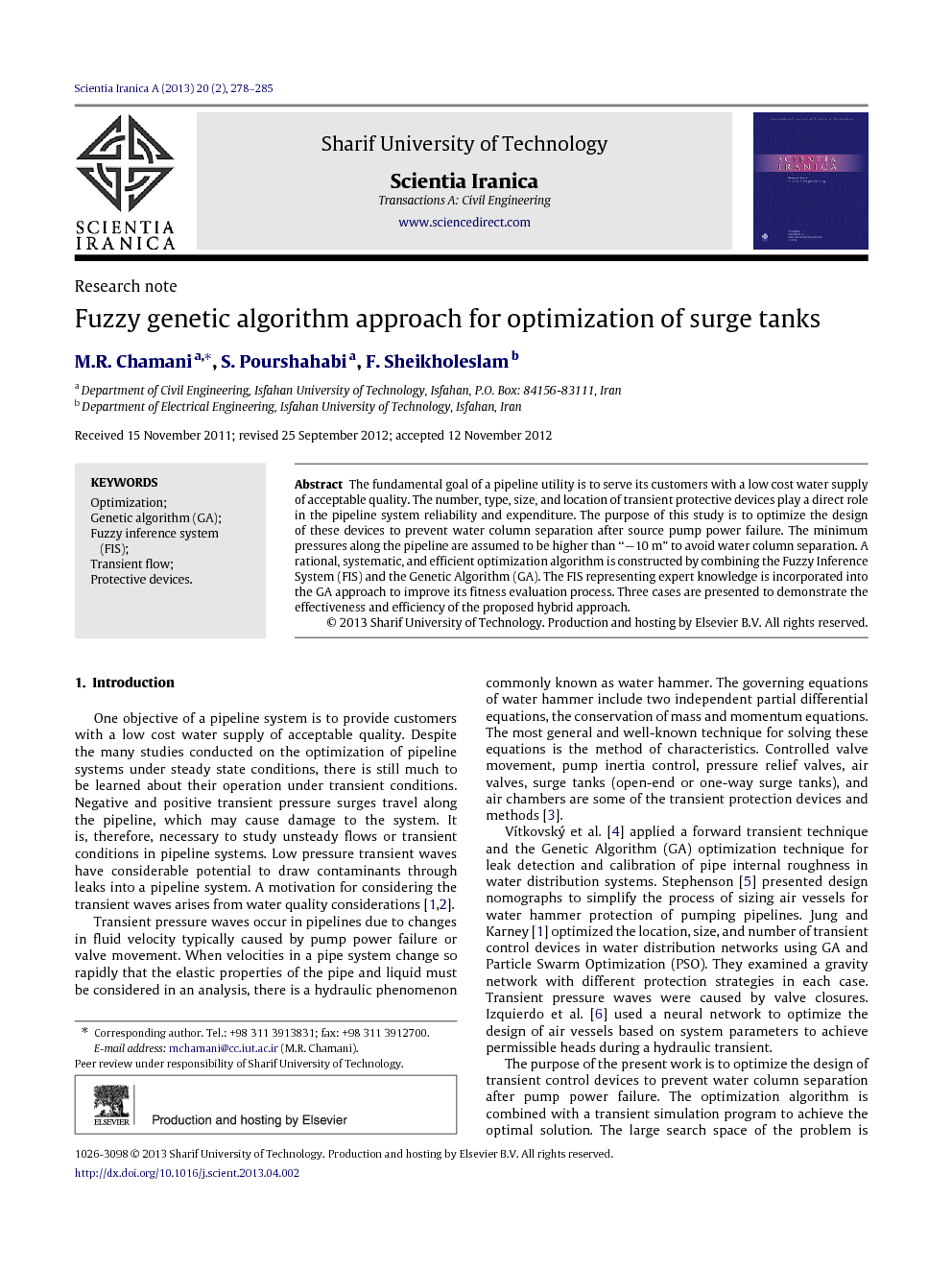 The fundamental goal of a pipeline utility is to serve its customers with a low cost water supply of acceptable quality. The number, type, size, and location of transient protective devices play a direct role in the pipeline system reliability and expenditure. The purpose of this study is to optimize the design of these devices to prevent water column separation after source pump power failure. The minimum pressures along the pipeline are assumed to be higher than “−10 m” to avoid water column separation. A rational, systematic, and efficient optimization algorithm is constructed by combining the Fuzzy Inference System (FIS) and the Genetic Algorithm (GA). The FIS representing expert knowledge is incorporated into the GA approach to improve its fitness evaluation process. Three cases are presented to demonstrate the effectiveness and efficiency of the proposed hybrid approach.

This paper applies Genetic Algorithms (GA) combined with Fuzzy Inference Systems (FIS) for optimization of the location and size of surge tanks in a water system consisting of a series of pipes. The fitness evaluation in this paper does not incorporate cost directly. Minimizing the size of the surge tanks results in minimized costs. Maintaining the desirable final liquid height in the surge tanks leads to a least cost design (the least volume of material used in the walls, bottom, and roof) for these devices. The results obtained from the present work indicate that determination of the fitness value for each chromosome and satisfaction of the constraints can be simply accomplished using the fuzzy inference system. A generalized method is developed for evaluating the fitness value that does not change with dimensional characteristics, time (implying inflation and discount rates in costs), and location. The stopping criteria of the optimization algorithm become rational, and local optimum solutions are avoided by normalizing the fitness value in the range [0, 1]. The number, size, and location of the surge tanks have no significant effects on the volume of consumed water to overcome water column separation. In other words, the amount of water consumed by one-way surge tanks to effectively handle water column separation is approximately constant and does not change with changes in surge tank geometry or location. Mamdani and Sugeno methods yield similar results for the demonstrated cases. Fulfillment of the minimum pressure constraint and critical submergence shows the effectiveness of the fuzzy-genetic method proposed.