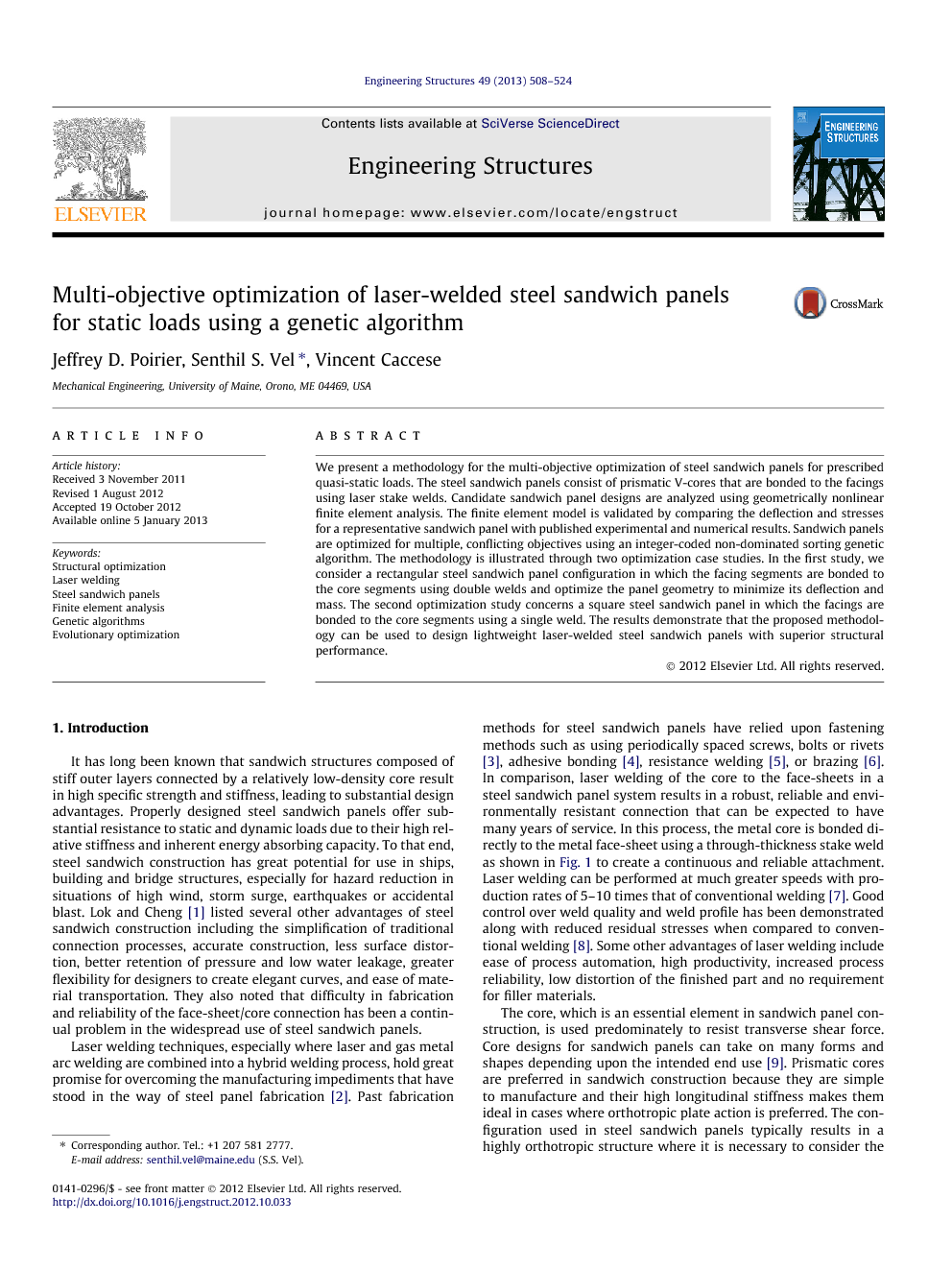 A methodology has been presented for the multi-objective optimization of laser-welded steel sandwich panels under quasi-static loads. Candidate designs are analyzed using a geometrically non-linear finite element analysis via ABAQUS [30]. The finite element analysis is validated by comparing the displacements and stresses for the sandwich panel geometry studied by Tan et al. [15] against their experimental and numerical results. The geometry and plate thicknesses of the core and facings are optimized using an integer-coded version of the elitist non-domination sorting genetic algorithm. The genetic algorithm is interfaced with ABAQUS using a custom interfacing routine. The proposed methodology is illustrated through two multi-objective optimization studies. In the first study, we consider rectangular steel sandwich panels that have the same overall length, width and height as the reference sandwich panel analyzed by Tan et al. [15]. Each segment of the core is bonded to the facings through a pair of laser welds similar to the double spot weld configuration used by Tan et al. [15]. The goal of the study is to obtain Pareto-optimal designs that minimize the deflection and areal density of the panel under prescribed loads. Constraints are set on the peak von Mises stress to ensure that the resulting sandwich panels do not exhibit plastic yielding. The geometry, thicknesses of the facings and core plate elements, number of prismatic cores, weld locations and the variable that specifies the loading surface are treated as optimization parameters. The algorithm generates a large number of Pareto-optimal designs that the designer can choose from ranging in areal mass density from 17.2 kg/m2 to 154.9 kg/m2. The Pareto-optimal front exhibits a distinct knee in the objective space. The designs close to the knee of the Pareto-optimal curve offer a good balance between stiffness and mass. In the second study, we optimize 2 m × 2 m square sandwich panels for mass and deflection. The optimized designs, which converge to a clearly defined Pareto-optimal front within 50 generations, range in mass from 24.2 kg/m2 to 160.8 kg/m2 for a design load of 80 kPa. Optimization studies are also performed for 40 kPa and 160 kPa loads. It is shown that the designs obtained for a particular load are not necessarily optimal designs for other loads. In other words, sandwich panels need to be optimized for a specific design load. When the number of prismatic cores is treated as an optimization variable, the resulting optimized sandwich panel designs are essentially truss core sandwich panels with continuous corrugations and core angle, α, that lies in the range of 60–65°. However, in the case of fixed number of cores, the optimal core angle depends on the number of cores.