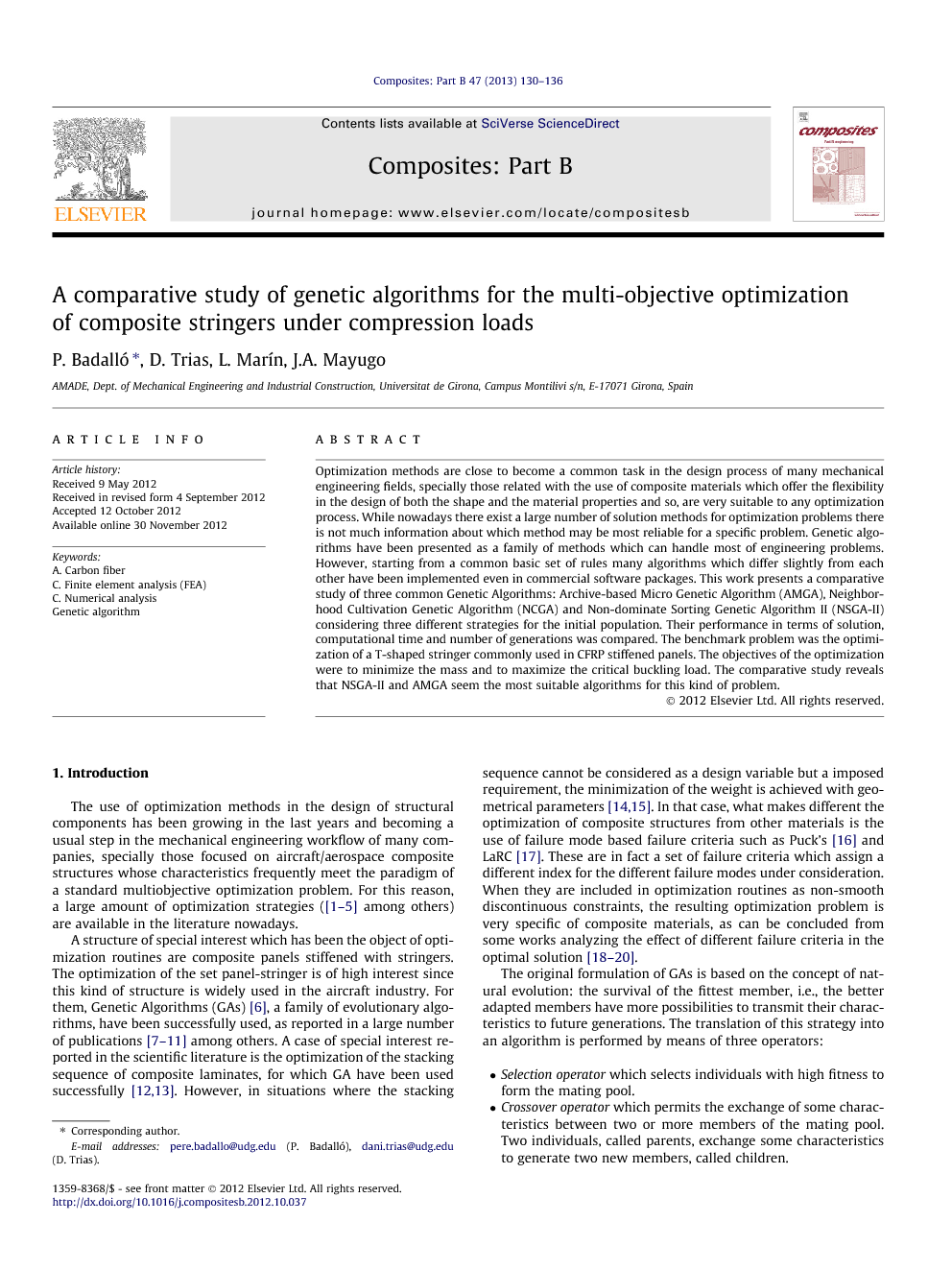 Optimization methods are close to become a common task in the design process of many mechanical engineering fields, specially those related with the use of composite materials which offer the flexibility in the design of both the shape and the material properties and so, are very suitable to any optimization process. While nowadays there exist a large number of solution methods for optimization problems there is not much information about which method may be most reliable for a specific problem. Genetic algorithms have been presented as a family of methods which can handle most of engineering problems. However, starting from a common basic set of rules many algorithms which differ slightly from each other have been implemented even in commercial software packages. This work presents a comparative study of three common Genetic Algorithms: Archive-based Micro Genetic Algorithm (AMGA), Neighborhood Cultivation Genetic Algorithm (NCGA) and Non-dominate Sorting Genetic Algorithm II (NSGA-II) considering three different strategies for the initial population. Their performance in terms of solution, computational time and number of generations was compared. The benchmark problem was the optimization of a T-shaped stringer commonly used in CFRP stiffened panels. The objectives of the optimization were to minimize the mass and to maximize the critical buckling load. The comparative study reveals that NSGA-II and AMGA seem the most suitable algorithms for this kind of problem.

A process to compare three GAs for the solution of multi-objective optimization problem of a simple composite material structure has been presented. A T-shape composite stringer under compression loads has been used as a benchmark for three different GA: AMGA, NCGA and NSGA-II. Moreover, a preliminary study of the specimen has been carried out to demonstrate that all the GAs reach the optimal solution. An analysis of the results aids to recognize the first differences between the GAs. Therefore, a lower value of Fobj is observed in NCGA. A non-parametric test (Mann–Whitney U-test) has been used to compare the equality or inequality of the results. This test evidences that the computing time is independent on the GA used for the calculation because all the time values are similar. This conclusion might be affected by the use of a reduced number of design variables. On the other hand, both the AMGA and the NSGA-II achieve a high and similar value of Fobj. The lowest number of generations is obtained by NCGA and NSGA-II. Finally, the different initiation mode (DP, R and IS) has been analyzed to appreciate the differences among them. In conclusion, the results of Fobj and the number of generations indicate that the most recommended GAs for similar structural cases are NSGA-II and AMGA, because they give similar results.