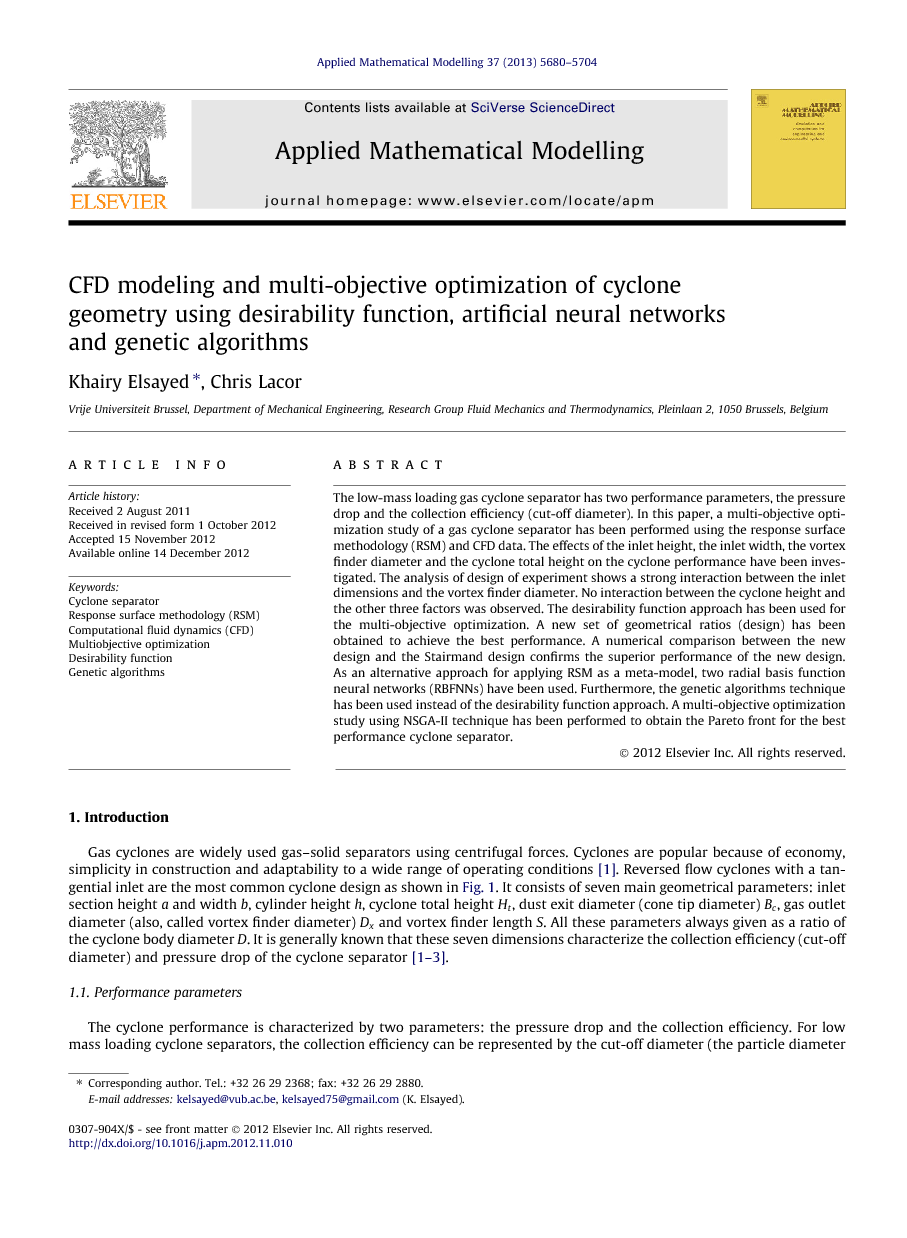 The low-mass loading gas cyclone separator has two performance parameters, the pressure drop and the collection efficiency (cut-off diameter). In this paper, a multi-objective optimization study of a gas cyclone separator has been performed using the response surface methodology (RSM) and CFD data. The effects of the inlet height, the inlet width, the vortex finder diameter and the cyclone total height on the cyclone performance have been investigated. The analysis of design of experiment shows a strong interaction between the inlet dimensions and the vortex finder diameter. No interaction between the cyclone height and the other three factors was observed. The desirability function approach has been used for the multi-objective optimization. A new set of geometrical ratios (design) has been obtained to achieve the best performance. A numerical comparison between the new design and the Stairmand design confirms the superior performance of the new design. As an alternative approach for applying RSM as a meta-model, two radial basis function neural networks (RBFNNs) have been used. Furthermore, the genetic algorithms technique has been used instead of the desirability function approach. A multi-objective optimization study using NSGA-II technique has been performed to obtain the Pareto front for the best performance cyclone separator.

Gas cyclones are widely used gas–solid separators using centrifugal forces. Cyclones are popular because of economy, simplicity in construction and adaptability to a wide range of operating conditions [1]. Reversed flow cyclones with a tangential inlet are the most common cyclone design as shown in Fig. 1. It consists of seven main geometrical parameters: inlet section height a and width b, cylinder height h, cyclone total height HtHt, dust exit diameter (cone tip diameter) BcBc, gas outlet diameter (also, called vortex finder diameter) DxDx and vortex finder length S. All these parameters always given as a ratio of the cyclone body diameter D. It is generally known that these seven dimensions characterize the collection efficiency (cut-off diameter) and pressure drop of the cyclone separator [1], [2] and [3].The cyclone performance is characterized by two parameters: the pressure drop and the collection efficiency. For low mass loading cyclone separators, the collection efficiency can be represented by the cut-off diameter (the particle diameter which produces 50% collection efficiency). Elsayed and Lacor [1] classified the different approaches to model the cyclone performance into four classes. 1. The theoretical and semi-empirical models, e.g., Shepherd and Lapple [4], Alexander [5], First [6], Stairmand [7], Barth [8], Avci and Karagoz [9] and Zhao [10]. 2. Statistical models through multiple regression analysis, e.g., Casal and Martinez-Benet [11], Dirgo [12] and Ramachandran et al. [13]. 3. Computational fluid dynamics (CFD) approach, e.g., Gimbun et al. [14], Zhao [15], Elsayed and Lacor [1], [3] and [16]. 4. Artificial neural networks come into picture as an efficient approach to model the cyclone performance, e.g., Zhao and Sub [17] and Elsayed and Lacor [18] and [19].

CFD simulations data have been used to understand the effect of four geometrical parameters on the cyclone performance and to optimize the cyclone geometry. Two meta-models have been used viz., the response surface and the radial basis function neural network approaches. Two optimization techniques have been applied, the desirability function with Nelder–Mead technique and the non-sorted dominated genetic algorithm NSGA-II. • The response surface methodology has been used to fit two second-order polynomials to the Euler number and cut-off diameter obtained from CFD simulations. The analysis of variance of the Euler number indicates a strong interaction between DxDx with (a,ba,b) and between DxDx with b only for the cut-off diameter. • The bi-objective functions have been converted to single-objective function using the desirability function approach. A new optimal design has been obtained using the Nelder–Mead technique available in Statgraphics commercial software. The ratio of inlet width to height b/a=0.589b/a=0.589 lays in the optimal cyclone lies in the recommended range of b/ab/a from 0.5 to 0.7 proposed by Elsayed and Lacor [3]. The new design and the Stairmand design have been computationally compared to get a clear vision for the differences between the flow field pattern and performance in the two designs. The CFD simulations results and four mathematical models confirmed the better performance of the new design in comparison with the Stairmand design. • The result demonstrates that artificial neural networks can offer an alternative and powerful approach to model the cyclone performance better than the response surface methodology. The used RBFNN presented zero mean squared error and almost unity coefficient of determination. • The analysis indicates the significant effect of the vortex finder diameter DxDx and the inlet dimensions a and b on the cyclone performance. Moreover, the range of high influence is given for each geometrical parameters using the trained RBFNNs. • The trained RBFNN for the Euler number has been used to get a new optimized cyclone for minimum pressure drop (Euler number) using the genetic algorithm optimization technique. The new cyclone design is very close to the Stairmand high efficiency design in the geometrical parameter ratio, and superior in low pressure drop at nearly the same cut-off diameter. But, the optimal design obtained from the desirability function results in a better collection efficiency (smaller cut-off diameter) as is clear from Table 8 because there the cut-off diameter is included in the desirability function, whereas, the obtained result are for single objective (Euler number). • The two trained RBFNNs have been used in a multi-objective optimization process using NSGA-II technique. The Pareto front is presented for the designer with a wide choice for selection. • A second-order polynomial has been fitted between the logarithms of Euler number and Stokes number to obtain a general formula, View the MathML sourceStk50=100.3533log10(Eu)2-1.1645log10(Eu)-2.3198 with a coefficient of determination R2=0.99613R2=0.99613. This formula can be used to obtain the Stokes number if the Euler number is known at View the MathML sourceh=1.5,S=0.5 and Bc=0.375Bc=0.375. As a recommendation for future work, the CFD simulations results given in Table 2 can be used with Kriging or gradient-enhanced Kriging [89] and [90] to obtain two surrogate models (for both the Euler number and the cut-off diameter using the available data). The resulting meta-model can be used for performance prediction for new cyclone designs or to calculate the objective functions in optimization instead of the RBFNN models used in the current study. Moreover, Co-Kriging [91] can be used to fit a surrogate model using multi-fidelity data. The CFD data can be considered as high-fidelity data and the low fidelity data can be obtained from some robust mathematical models, e.g., Ramachandran et al. model [13] for pressure drop calculations and Rietema model [78] for cut-off diameter estimation. Alternatively, if some experimental data are available, it can serve as a high-fidelity data whereas, the CFD data given in Table 2 will be the source of the low-fidelity data.