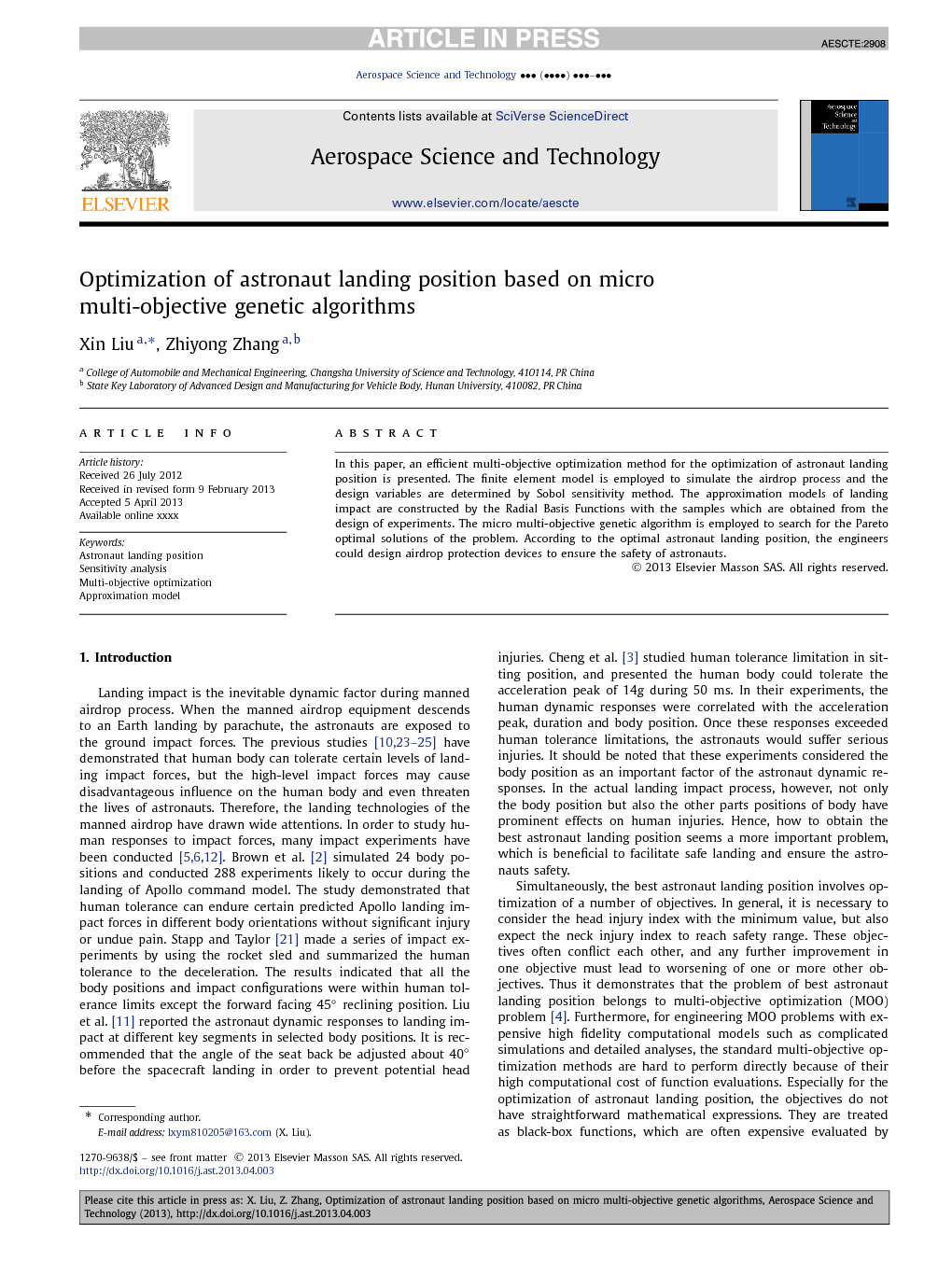 In this paper, an efficient multi-objective optimization method for the optimization of astronaut landing position is presented. The finite element model is employed to simulate the airdrop process and the design variables are determined by Sobol sensitivity method. The approximation models of landing impact are constructed by the Radial Basis Functions with the samples which are obtained from the design of experiments. The micro multi-objective genetic algorithm is employed to search for the Pareto optimal solutions of the problem. According to the optimal astronaut landing position, the engineers could design airdrop protection devices to ensure the safety of astronauts.

Landing impact is the inevitable dynamic factor during manned airdrop process. When the manned airdrop equipment descends to an Earth landing by parachute, the astronauts are exposed to the ground impact forces. The previous studies [10], [23], [24] and [25] have demonstrated that human body can tolerate certain levels of landing impact forces, but the high-level impact forces may cause disadvantageous influence on the human body and even threaten the lives of astronauts. Therefore, the landing technologies of the manned airdrop have drawn wide attentions. In order to study human responses to impact forces, many impact experiments have been conducted [5], [6] and [12]. Brown et al. [2] simulated 24 body positions and conducted 288 experiments likely to occur during the landing of Apollo command model. The study demonstrated that human tolerance can endure certain predicted Apollo landing impact forces in different body orientations without significant injury or undue pain. Stapp and Taylor [21] made a series of impact experiments by using the rocket sled and summarized the human tolerance to the deceleration. The results indicated that all the body positions and impact configurations were within human tolerance limits except the forward facing 45° reclining position. Liu et al. [11] reported the astronaut dynamic responses to landing impact at different key segments in selected body positions. It is recommended that the angle of the seat back be adjusted about 40° before the spacecraft landing in order to prevent potential head injuries. Cheng et al. [3] studied human tolerance limitation in sitting position, and presented the human body could tolerate the acceleration peak of 14g during 50 ms. In their experiments, the human dynamic responses were correlated with the acceleration peak, duration and body position. Once these responses exceeded human tolerance limitations, the astronauts would suffer serious injuries. It should be noted that these experiments considered the body position as an important factor of the astronaut dynamic responses. In the actual landing impact process, however, not only the body position but also the other parts positions of body have prominent effects on human injuries. Hence, how to obtain the best astronaut landing position seems a more important problem, which is beneficial to facilitate safe landing and ensure the astronauts safety. Simultaneously, the best astronaut landing position involves optimization of a number of objectives. In general, it is necessary to consider the head injury index with the minimum value, but also expect the neck injury index to reach safety range. These objectives often conflict each other, and any further improvement in one objective must lead to worsening of one or more other objectives. Thus it demonstrates that the problem of best astronaut landing position belongs to multi-objective optimization (MOO) problem [4]. Furthermore, for engineering MOO problems with expensive high fidelity computational models such as complicated simulations and detailed analyses, the standard multi-objective optimization methods are hard to perform directly because of their high computational cost of function evaluations. Especially for the optimization of astronaut landing position, the objectives do not have straightforward mathematical expressions. They are treated as black-box functions, which are often expensive evaluated by complex simulation software tools. Direct coupling black-box functions with multi-objective optimization method usually need unacceptable computation cost. For this reason, the use of approximation models [18], which are the corresponding low fidelity models, becomes more attractive in these problems. There are many techniques for constructing the approximation models, Response Surface Approximations (RSA), Kriging, Radial Basis Functions (RBF), etc. Based on these methods, many engineering optimization problems have been solved [8], [9], [14] and [26]. Furthermore, the approximation models can also provide fast estimations of the objective and constraints at new design points. In this paper, an efficient multi-objective optimization method based on the approximation model technique is presented for obtaining the best astronaut landing position. The finite element model is employed to simulate the airdrop process and the design variables are determined by Sobol method. Two objective functions are created to minimize the human neck injury index and head injury index. Then the micro multi-objective genetic algorithm is employed to search for the Pareto optimal solutions of the problem. According to the optimal astronaut landing position, the engineers could design airdrop protection devices to ensure the safety of astronauts.

In this paper, an efficient multi-objective optimization method is given to optimize the astronaut landing position in manned airdrop. The sensitivity analysis of design variables is performed in terms of Sobol method. The results indicate that head–neck angle and body angle have prominent effects on human injuries. Simultaneously, the approximation models technology based on Radial Basis Functions is used to mathematically capture the astronaut dynamic responses to landing impact. Under the help of micro multi-objective optimization method, the Pareto optimal solutions of astronaut landing position are obtained. It should be noted that the attitude of the decision maker will influence the selection of the Pareto solutions. If the head injury evaluation is most cared, a relatively small HIC index can be selected; if the neck security is most important, then a relative small NIC index should be specified. According to the optimization results, the engineers could design airdrop protection devices to ensure the safety of astronauts.