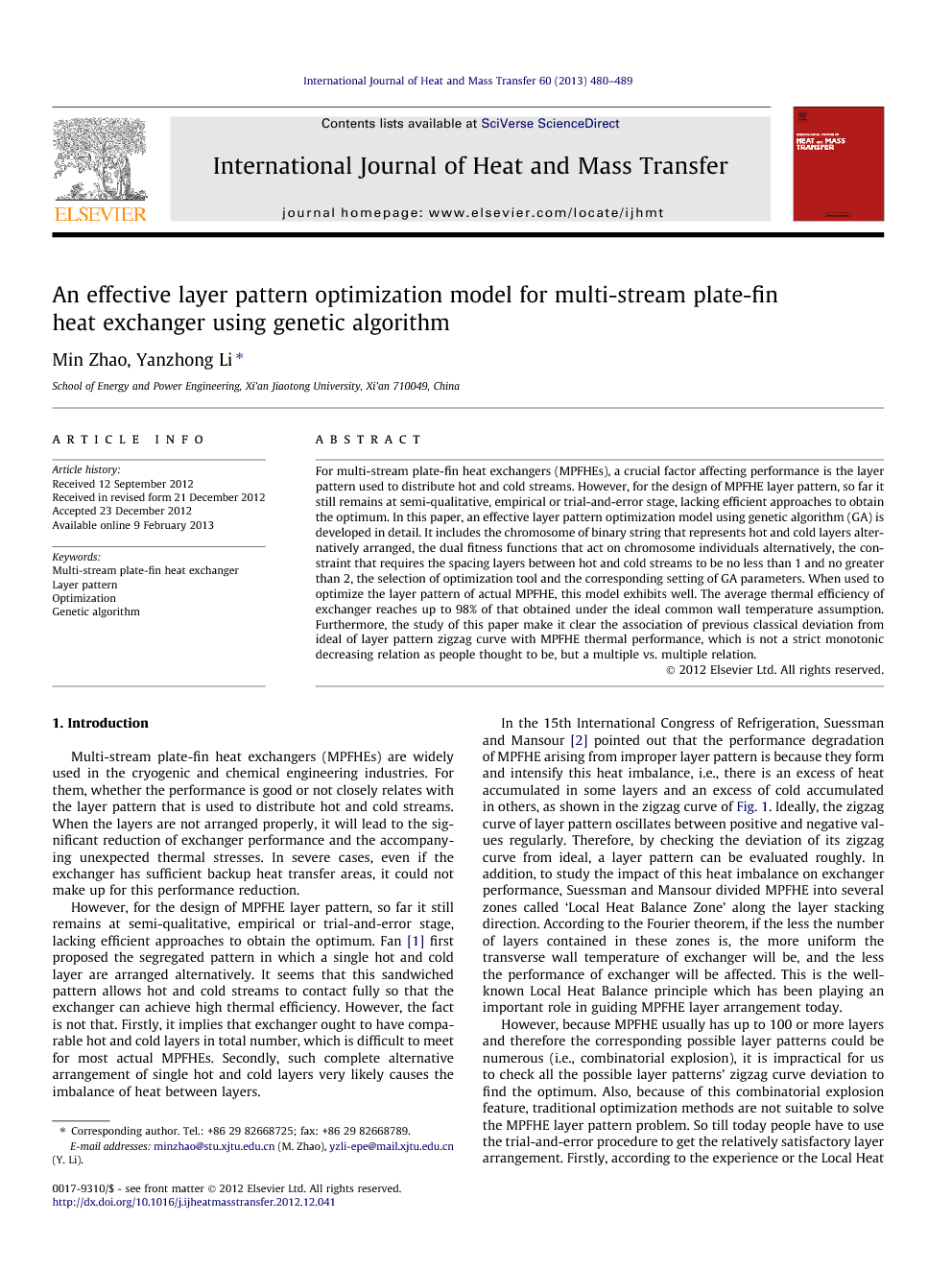 For multi-stream plate-fin heat exchangers (MPFHEs), a crucial factor affecting performance is the layer pattern used to distribute hot and cold streams. However, for the design of MPFHE layer pattern, so far it still remains at semi-qualitative, empirical or trial-and-error stage, lacking efficient approaches to obtain the optimum. In this paper, an effective layer pattern optimization model using genetic algorithm (GA) is developed in detail. It includes the chromosome of binary string that represents hot and cold layers alternatively arranged, the dual fitness functions that act on chromosome individuals alternatively, the constraint that requires the spacing layers between hot and cold streams to be no less than 1 and no greater than 2, the selection of optimization tool and the corresponding setting of GA parameters. When used to optimize the layer pattern of actual MPFHE, this model exhibits well. The average thermal efficiency of exchanger reaches up to 98% of that obtained under the ideal common wall temperature assumption. Furthermore, the study of this paper make it clear the association of previous classical deviation from ideal of layer pattern zigzag curve with MPFHE thermal performance, which is not a strict monotonic decreasing relation as people thought to be, but a multiple vs. multiple relation.

Multi-stream plate-fin heat exchangers (MPFHEs) are widely used in the cryogenic and chemical engineering industries. For them, whether the performance is good or not closely relates with the layer pattern that is used to distribute hot and cold streams. When the layers are not arranged properly, it will lead to the significant reduction of exchanger performance and the accompanying unexpected thermal stresses. In severe cases, even if the exchanger has sufficient backup heat transfer areas, it could not make up for this performance reduction. However, for the design of MPFHE layer pattern, so far it still remains at semi-qualitative, empirical or trial-and-error stage, lacking efficient approaches to obtain the optimum. Fan [1] first proposed the segregated pattern in which a single hot and cold layer are arranged alternatively. It seems that this sandwiched pattern allows hot and cold streams to contact fully so that the exchanger can achieve high thermal efficiency. However, the fact is not that. Firstly, it implies that exchanger ought to have comparable hot and cold layers in total number, which is difficult to meet for most actual MPFHEs. Secondly, such complete alternative arrangement of single hot and cold layers very likely causes the imbalance of heat between layers. In the 15th International Congress of Refrigeration, Suessman and Mansour [2] pointed out that the performance degradation of MPFHE arising from improper layer pattern is because they form and intensify this heat imbalance, i.e., there is an excess of heat accumulated in some layers and an excess of cold accumulated in others, as shown in the zigzag curve of Fig. 1. Ideally, the zigzag curve of layer pattern oscillates between positive and negative values regularly. Therefore, by checking the deviation of its zigzag curve from ideal, a layer pattern can be evaluated roughly. In addition, to study the impact of this heat imbalance on exchanger performance, Suessman and Mansour divided MPFHE into several zones called ‘Local Heat Balance Zone’ along the layer stacking direction. According to the Fourier theorem, if the less the number of layers contained in these zones is, the more uniform the transverse wall temperature of exchanger will be, and the less the performance of exchanger will be affected. This is the well-known Local Heat Balance principle which has been playing an important role in guiding MPFHE layer arrangement today.

However, because MPFHE usually has up to 100 or more layers and therefore the corresponding possible layer patterns could be numerous (i.e., combinatorial explosion), it is impractical for us to check all the possible layer patterns’ zigzag curve deviation to find the optimum. Also, because of this combinatorial explosion feature, traditional optimization methods are not suitable to solve the MPFHE layer pattern problem. So till today people have to use the trial-and-error procedure to get the relatively satisfactory layer arrangement. Firstly, according to the experience or the Local Heat Balance principle give the layer pre-arrangement, and then through the simulation means check whether the performance of MPFHE achieves design requirements under this layer pattern. If not, adjust it and repeat the above procedure till the required performance is met. Obviously, this design method is not only time-and labor-consuming, but also could not ensure the quality of final results. Recently in solving combinatorial explosion optimization problems of real world, genetic algorithm (GA) has got wide applications owing to its small dependence on the studied problems and powerful and robust searching ability [3], [4], [5], [6], [7], [8], [9], [10], [11], [12], [13], [14], [15] and [16]. Many authors have also used GA to the field of heat exchanger optimization design [17], [18], [19], [20], [21], [22] and [23]. For example, Ponce-Ortega et al. [21] use it to optimize shell-and-tube heat exchanger parameters such as the number of tube-passes, the diameter and pitch of tube, the baffle cut, etc. Xie et al. [18] use it to optimize the structure size of plate-fin heat exchanger, etc. However, people seldom use GA to optimize the layer pattern of MPFHE. So far only Ghosh et al. [24] have done the related work. In their GA model, the optimization objective is to maximize MPFHE heat transfer rate estimated by their own rating program. The layer pattern chromosome is adopted sequential coding, i.e., from left to right each layer of the pattern is in turn represented by a certain fixed number of bits, nb. When the total number of layers is N, a string of nb × N bits joined together will represent the whole layer pattern. For the value of nb, authors give two methods to determine, View the MathML sourcenb=log2N and nb = N − 1. The former is used for some specific cases as a means of verification, and the latter is applied for all tested cases. For the main GA parameters, authors select tournament selection, uniform crossover and uniform mutation, respectively. This model obtains satisfactory results when used to optimize the layer pattern which is composed of 3–8 different fluid stream layers. However, their tested cases are far from the actual MPFHE layer pattern optimization situation, in which each stream has their own number of layers constraint, both number and type of individuals in the GA population pool increase dramatically as a result of multiple streams and tens or hundreds of layers in exchanger, single and cascade arrangement are mixed in a layer pattern, etc. all these together increase the difficulty of GA to meet constraints and obtain good optimal results greatly. This paper is committed to solving the above practical problems using special chromosome coding, fitness function and constraints so that the better layer pattern solution can be obtained. An important feature of our GA model is the use of dual fitness functions. During the optimization process, it is found that the minimization of the deviation of zigzag curve from ideal is not enough. Its optimal result’s MPFHE thermal efficiency is only 92.4% on the average. When another upgrade fitness function is combined with it to alternatively optimize the layer pattern individuals (see Sections 2 and 3 of this paper), the optimal result of GA has got an evident improvement, whose MPFHE thermal efficiency has increased from 92.4% up to 98% and some even close to 99% (98.7%). Another important feature of our model is that the related heat transfer calculations (by MUSE software) are not embedded into genetic algorithm as a part of its fitness function and therefore the computational time is reduced greatly [19] and [25]. In addition, through the study of this paper, the relation of previous classical deviation from ideal of layer pattern zigzag curve with MPFHE thermal performance is made clear, which, on the whole, is that the heat transfer rate of MPFHE increases with the deviation decreasing. But they do not follow a strict monotonic decreasing relation as people thought to be, but a multiple vs. multiple relation. Below let us give the detailed GA optimization model first, and then case study is followed and results are discussed. Finally, the conclusions are drawn.